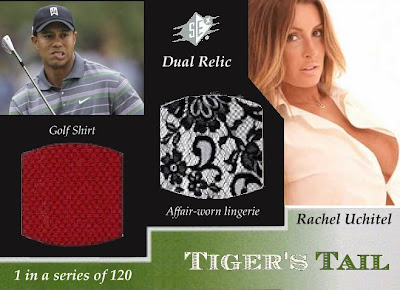 This one was just too obvious.  As part of his rehab, Tiger apparently confessed to 120 affairs during his five year marriage.  There were about 15 notable mistresses in the tabloids.  Rachel Uchitel was the first on the list.

I started this design with a dual autograph card as the template, and had a nice background of the tabloid front pages, but couldn't fill the space with anything constructive or visually pleasing.  So I revamped the design with the dual swatches and filled in the rest around it.  It's a lot simpler than I originally imagined, but looks pretty good IMO.  I may play around with the design some more for other mistresses.  (Oct 2010)
Posted by GCA at 9:44 PM No comments:
Labels: custom cards
Newer Posts Older Posts Home
Subscribe to: Posts (Atom)