As you probably know, I'm not one to pay much attention to the hype on modern cards and their exorbitant prices.  The stars today don't quite have the mystique or reverance to me that vintage guys do.  Which is not to say that there aren't a few players that will be in the record books and lore for a long time to come.

Every once in a while I have to acknowledge that as it manifests itself in cards.

So a couple months ago, I went into my collection... 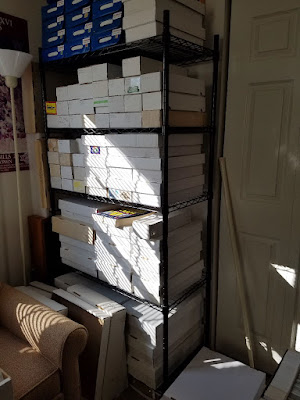 It's down here somewhere... 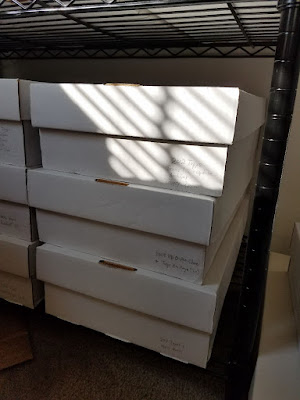 Of course it's on the bottom... 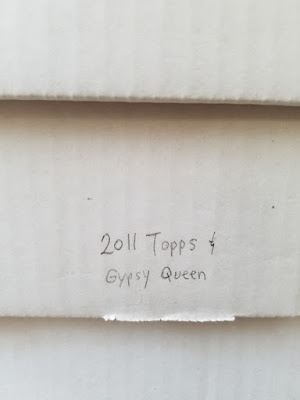 Writing on the corner of a box is rather difficult.  My handwriting is better than this.  But anyway... 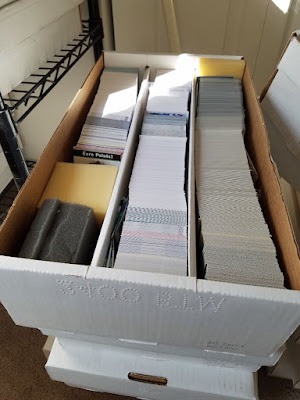 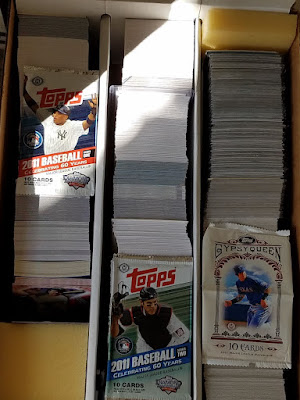 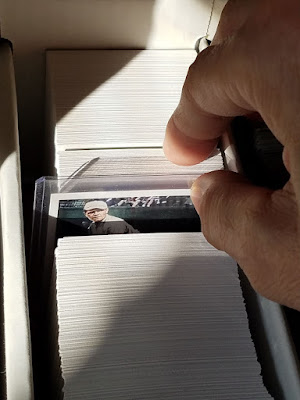 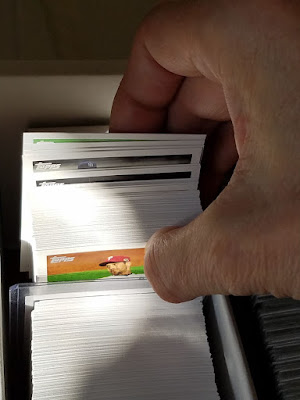 Pull that chunk out... 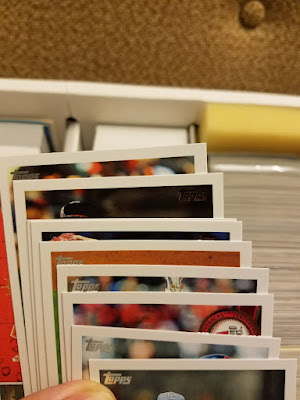 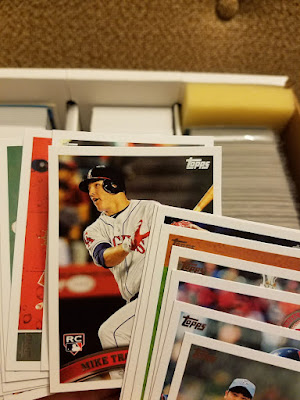 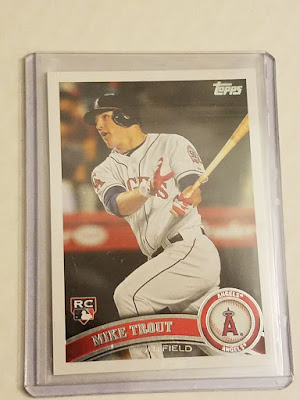 Figured I shouldn't leave him in there with the set for much longer.  I could put him in one of those big lucite holders with the four screws like I have all my other big money cards.  (I know, no one uses those any more.)

Anybody else I might be neglecting in my sets for the last decade or so who is now over $50?

As of the first of September, I have sold 21 cards for a total of just over $72.  I still have 223 for sale in inventory.  (Let me know if you see something you like, but the price is not right.)

So far, this has accounted for a few more of the monster boxes I got in the initial "hoard".  I'll have to count up how many more I have to go.  My original plan was to sell off enough on COMC to equal what I paid for the whole 15 boxes.  I have sold a few chunks here and there that have contributed as well.

When my sales total got over $50, I started shopping for myself on the site.  I picked out some player collection cards, some set and insert needs, and a few oddballs.  Here is what I basically traded for the cards I sold: 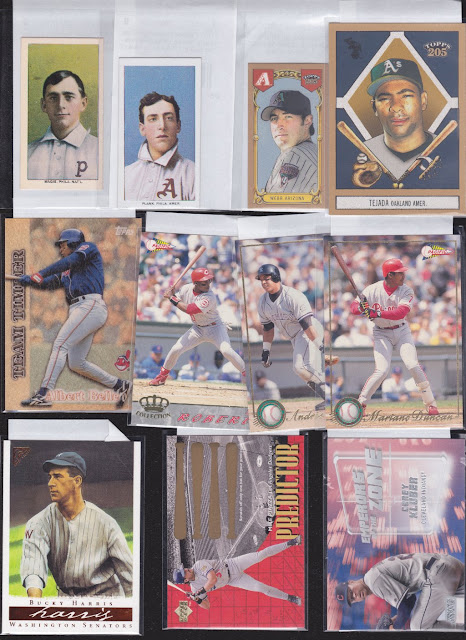 The first two are reprints from the 1987 Hygrade set - they are inserts that have multiple variatoins of the text on the back, namely the stated value of the real card.  Both were the last ones I was missing.
The mini and the Tejada are from 2003 Topps 205.  Miguel is the blue background variation, and the mini is the "exclusive pose" flavored high number.
Next up, a woody feeling insert from 2003 Topps, and one back-number variation from 1994 Pacific, as well as two inserts from that set.  (Anyone need base cards from this?  I still have a ton.)
And on the bottom row, the last card for Topps Gallery HOF (also 2003).  Every card is one of a pair of subtle variations.  This is the red W one.  Piazza is the last of the scratch-off Predictor cards from 1997 Upper Deck, (now I can start on the prize cards that you got by sending these in) and the final Emperors Of The Zone from 2019 Stadium Club. 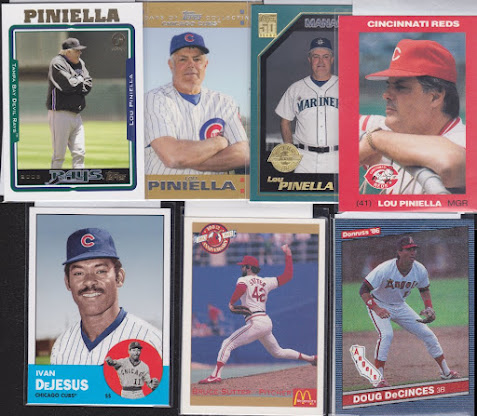 I buzzed through a bunch of my vintage baseball guys and landed a few cheap parallels of Lou Piniella as a manager,  one stadium giveaway Cubs Ivan DeJesus (I was at Wrigley for one series of those), a McDonalds Bruce Sutter that I might have already, and an innocent looking '86 Donruss DeCinces that's actually a well cut box bottom card. 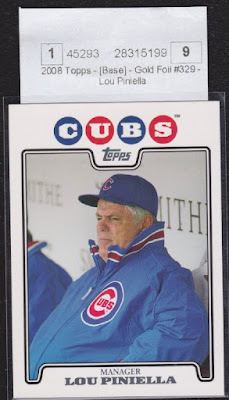 Unfortunately, I didn't look close enough to one of the Piniellas and paid $.80 for a regular base card that was supposed to be a gold foil version.  They put a little barcoded slip in with each card like this.  (That's why all my scans have white in the background.)  Makes it easier to put away funky parallels when they're not easy to distinguish (when they're accurate anyway). 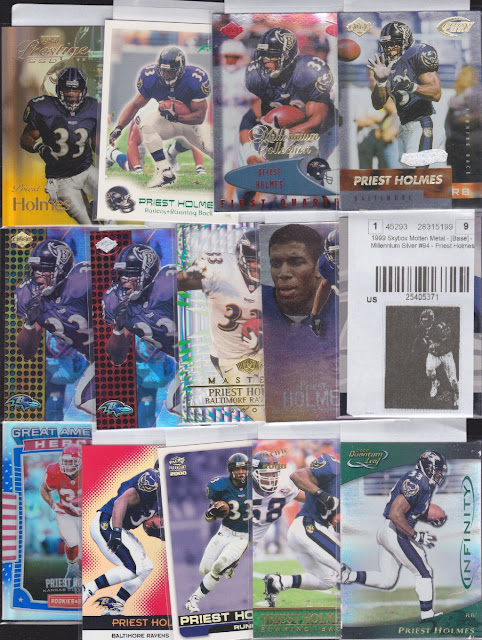 I really started to go nuts with Priest Holmes parallels, but stopped after 2000 or so.  I could have tripled my cartful with just his, but I'll wait for the next batch.  I skipped a bunch that I didn't have by putting a limit on what I spent on one card at about $5.  I won't list in detail all these, but I bet there are a few you haven't seen often.  There are no regular base cards except the first one in the middle row - it's a retail flavor of that Collector's Edge set.  The Cheifs card is 2017 or so. 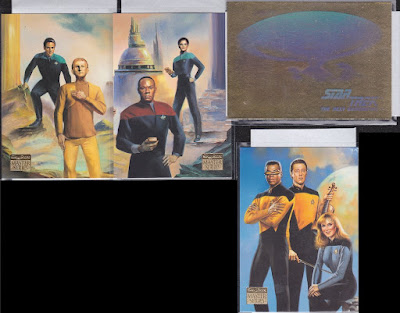 I couldn't believe I found these on there for only a buck or two!  The three character cards from Star Trek: The Next Generation and Deep Space Nine are "Tryptichs" from the Skybox Master Series of 1994.  The hologram is the one exchange card from a set of nine that otherwise came from packs of the 1992 Impel Next Gen set.  Now I just have to wait for the other Triptychs (and four Master Series holograms that I just discovered) to show up later. 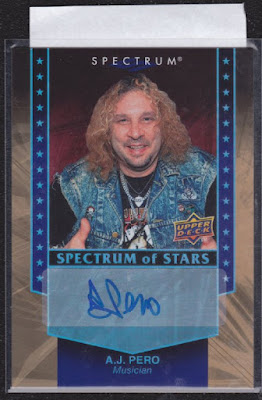 And to round things out, I snagged this 2008 UD Spectrum of Stars auto of Twisted Sister drummer A.J. Pero a while ago for about $12.  Sadly he passed away in 2015.  I think I'm only missing Vince Neil from these.

So effectively these were basically free for several of the cards I shipped off to COMC in April.

I also paid my first month's "storage fees" for card that have been there more than 90 days.  It was a whopping 60¢!  Of course, that's just for the ones that were posted from April.  There are a lot more that have only been up for a few weeks - from the same box I shipped!  But at least I don't fear the storage fees will be a big deal.  Anything priced under 75¢ is exempt.