I was fortunate enough to pull a Rip Card out of one box of 2021 Allen & Ginter last week.  I could never leave the inner contents unrevealed, but how to preserve the outer card and still get to the mini inside?  Watch and learn! 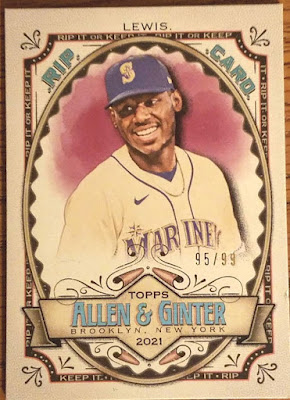 I've never believed in destroying cards if they are in presentable shape, even if they're 1990 Donruss or something.  And with Rip cards, I figure there has to be a way to get the mini out of the middle without tearing up the outside card.  These are thick enough that you should be able to slice the edges and keep the outer card whole, right?  But how to keep the blade aligned? 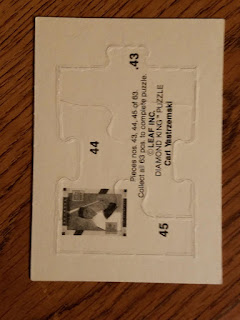 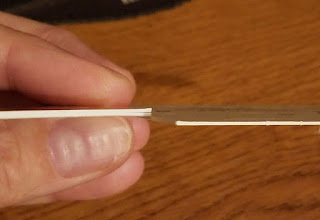 So I found that an old Donruss puzzle piece is about half the thickness of a Rip card.  This should make a good base. 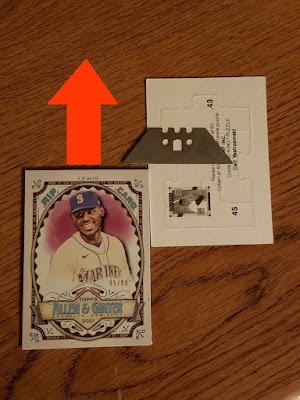 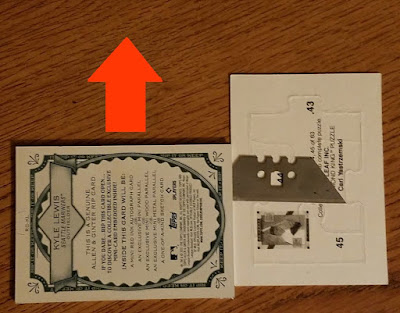 This should split the Rip card enough to get to the mini inside. 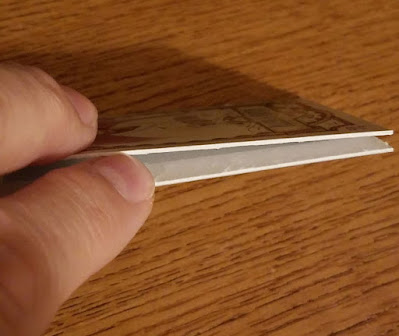 And your Rip card is still in presentable condition! 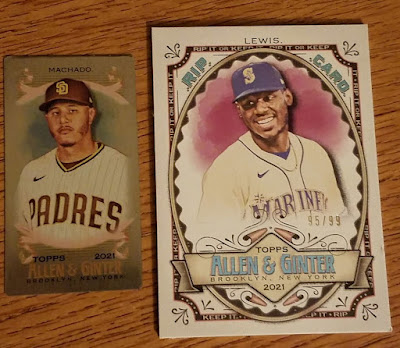 I got a metal Manny Machado in mine.  (Say that 3x fast).  There are apparently only three of each metal mini.  It's the Mini Exclusives Extended Metal #386. 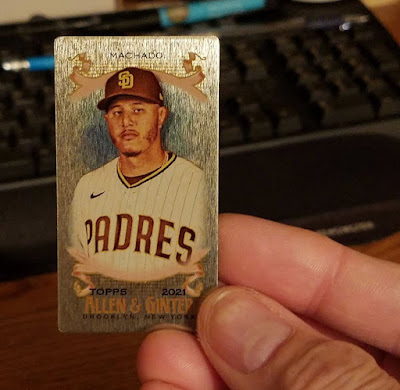 Here's a better look at the finish on the metal. 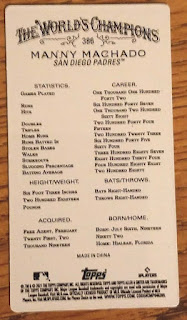 Anyway, hope that helps you preserve your Rip cards and not slice up your fingers!

Posted by GCA at 8:00 AM 11 comments:
Labels: cognitive byproducts, How I do it, mojo hits, OCD, pimpin' ain't easy, teaching, victory is sweet

I'm still not really in the swing of things as far as posting regularly, but in an effort to move that along, here are some quick things I wanted to throw out to you. 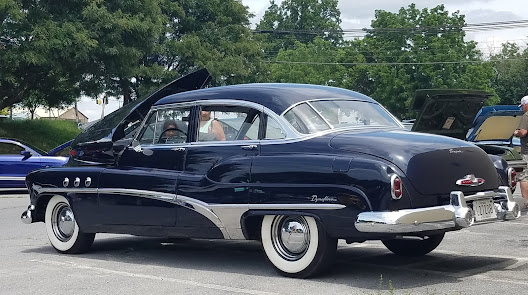 Thanks to a couple good samaritans who helped me get the old Buick back home today after it broke down in the middle of a three lane road in the busiest part of town.  The ol' girl was about out of gas when I left for a show this morning, and has been hard to start the last few times.  I got her going and made it to the gas station OK, but after filling up, she quit on me and it took about 20 minutes of holding the hood up and cranking on it to get out of the road.  Then she quit again when I got just around the corner going the other way.  A couple gents helped me push her all the way out of the traffic lane, and another guy named Leroy stopped twice - the second time to bring starter fluid and we got her going again.  I made it home OK after that.  I think there must have been sediment in the bottom of the gas tank that got drawn up into the engine when it was low, and then got stirred up when I filled up.  Who knows... 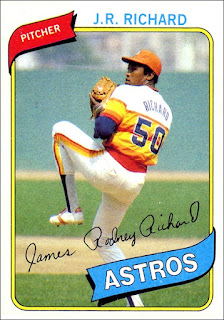 I thought about posting my J.R. Richard player collection after he passed a while back, but never did.  I'll look to see how many oddballs I have of him.  Let me know if that's something you'd like to see.

I bought two boxes of 2021 Allen & Ginter and need to trade for about half the base set and bunches of inserts.  I have player minis and a couple hits and inserts available.  I know Nachos Grande has a lot of trade fodder.  Anyone else?  I got a Yadier box topper and an Arenado N43.  (Cardinals hot toppers!).   I also got a Rip card and figured out a special technique for opening them that I will post right after this.

Got a PWE from Jon at Penny Sleeve blog.  Thanks for the sharp '57s!  I do actually prefer centering to corners, but it was great getting them anyway - much appreciated!

Chris Sewall posted this video on his YouTube channel - BASEBALL CARD COLLECTOR INVESTOR DEALER (in that order).  It's a pretty decent walkthrough of the 2021 National.  Really gives a good impression of the scale of the show.

Check out Chris' other content.  His delivery isn't flashy, but his stories and information are good.

Posted by GCA at 12:31 PM No comments:
Labels: Believe the Hype, Places ya gotta see, the whole thing at once

If you ask a lot of the attendees at this year's National Sports Collector's Convention, they'll say it was the best show in a long time.  Personally, my opinion is a lot less glowing, but still positive overall.

I attended the VIP preview on Wednesday night with two friends and spent most of that evening and the next two days on the sales floor.  To their credit, the National staff scaled up the VIP Party by moving it upstairs to a ballroom about three times as big as the one used in previous years.  There still wasn't any seating by the time we got there (about 20 minutes after it started), but there was still plenty of food and drinks available.  The last couple times we went, it was standing room only wall to wall and when they announced that the food was being served or the autograph guests were starting to sign, it was a massive stampede.  This time, it was much calmer, even though the auto lines had already formed around the outside of the room.  The lines moved pretty quickly without significant incident.  I got Wally Joyner's autograph on a card for Stuart and then our other friend and I went in to the show floor. 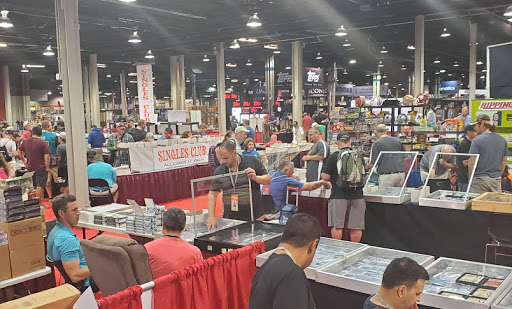 According to a Michigan dealer that we spoke to later, the sales and trade action between dealers even before the Sneak Preview opening Wednesday night was amazing.  Thousands of dollars of cards and memorabilia exchanged hands as sellers filled their tables for the show.  The impression was that most dealers then did pretty well for the rest of the week.

My expectations of the effect of the huge influx of new customers (notice I didn't say "collectors") was realized when after walking around most of the show floor.  The ratio of what I call "mojo" tables - displays of nothing but slabbed cards - outnumbered the offerings of raw vintage, current bulk singles, and other memorabilia.  The "normal" proportion was almost even between the three before the COVID pandemic - slab tables occured only in slightly higher numbers than the other stuff, so there was still a lot of vintage and current singles/inserts/boxes for set builders and old school collectors like me.  This time, I'd say mojo was there at about three or four times more than anything else.  And the customer base reflected this change as well.  The floor was like an airport with all the people dragging luggage looking to make trades or sales.  Every couple tables were populated on both sides with young people standing there on their cell phones trying to make deals or looking at population reports or whatever they do - I'm not really sure because I just keep on walking by. 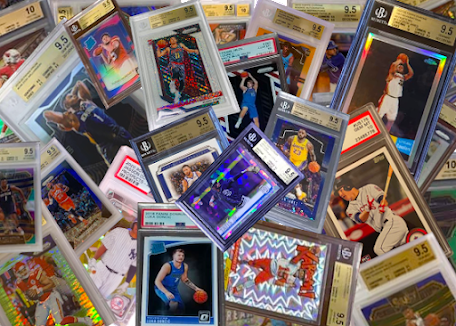 That's not to say that there was any lack of nice vintage cards at the National.  My best purchase was finding a rare short-printed 1966 Topps #591 Bart Shirley / Grant Jackson rookie card.  It's actually for my Grant Jackson player collection, which isn't really one of my most important, but needed completing just the same.  For a while, I thought the '66 RC was being hoarded and artificially jacked up in price by an unscrupulous dealer, but after talking to a couple other dealers, the card is legitimately short printed and rare.  I managed to find one that has some adhesive residue on the corners from being pasted into a photo album or something, but since it was marked at $115 - around half the normal price - and is in great condition otherwise, it was an easy buy.  Thanks to The Battersbox (.net) for offering it. 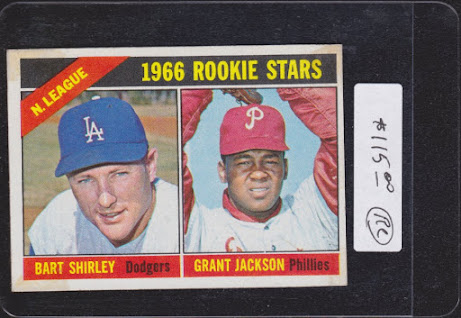 I got some '78 O-Pee-Chee singles for my set build, and a few '57 Topps, but that was the extent of the vintage that I walked away with this year.  Stuart was targeting the last two '67 Topps he needed - Tom Seaver RC and Brooks Robinson, both high numbers - but we really didn't see either of them.  Both of us (were) also in the market for a Wayne Gretzky Topps RC to finish our '79-80 Topps hockey sets too, but they are now four digits compared to the $300-400 range I recall seeing a couple years ago.

The lesson I took from the show was that big ticket items like superstar rookies are way out of reach since 2020.  Might as well forget about finding things like the '58 Jim Brown rookie for that set, or the T205 Christy Mathewson for my NYG team build until the prices come back down to earth in a couple more years (we hope). 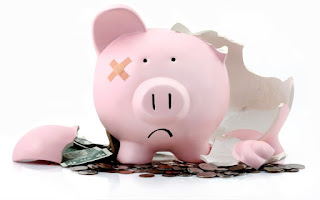 The bulk of my National purchases was in the realm of recent Topps inserts.  SJ Bachman Sportscards had a big two-table layout over to the far side under the Aisle signs as they have done the last few conventions.  They carry the best selection of inserts from the last ten years or so as well as tons of Heritage and other shortprint cards from recent sets.  I bought batches from them all three days that I was at the show.  It was so much fun knocking off the last few inserts from so many sets on my want lists.  The National dealer list shows them as based out of Florida, but an article from 2012 announces the opening of a store in Goshen, IN.  Either way, they don't have an online presence except for an empty eBay store, unfortunately.

Except for another very productive meetup with Jim (Mr. Haverkamp), and Brewer Dave from SCF hanging out with us the one day he was there, I didn't see any other bloggers or trade partners at the show.  I was hoping to offload some binders for free, but no one inquired.  I'm sure I blend into the crowd very well, but it always adds to the enjoyment of a show to meet some of the folks that you see on the interwebs.

Our other friend Steve that came with us the first couple days had a different take on things.  It was his first National, and he was, in fact impressed by the scale of the show.  His rather cynical view otherwise was that there were all these older guys who had collected for decades - and had collected much nicer stuff than he had ever seen - and now they are sitting at tables trying to get rid of it all before they pass away and their relatives have to deal with the cards that they know nothing about.  Hopefully not many people carried away such a demoralizing impression.  (I don't think so.)

As for me, I give the show a B-.  I expected and observed the takeover by the flippers and mojo hunters.  It's America, so they can do what they want (as long as they're not hampering the availability of cards for the rest of us.) But that being said, this year's show offered a somewhat diminished selection for what I'm looking for.  I did better in the shops around Michigan that Stuart and I visited in the week following the Chicago trip.  As I say often, I'm not the type of collector or customer that the card industry hype machine operates for, so I saw exactly what I thought I would.  My view is far different from the average attendee, so the result isn't surprising.

Share your impressions in the comments if you made it to the convention!