Celebrating Something Else Born in 1951

I've been looking for something like this for a while now.  I joined a club of fellow enthisiasts to find it.  And in April, I saw an ad for just what I was looking for.  And I went and got it.  It was delivered to me Sunday. 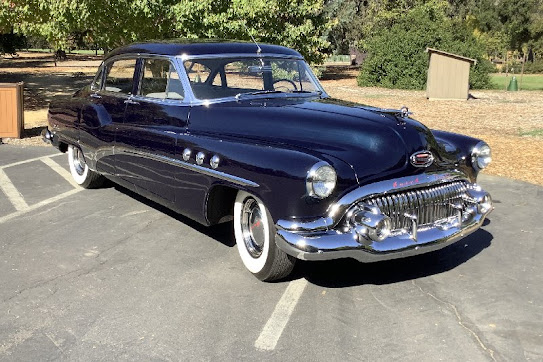 This 1951 Buick Special Riviera is sitting in the garage at my mother's house.  I still can't believe it's mine.

It all just fell into place.  I had been looking on Hemmings website for months for early 50's Pontiacs or Buicks.  Then I joined the Buick Club of America, figuring I liked those best and any members selling on there would be in it for the enjoyment of the cars and not trying to hawk rustbuckets for a quick buck.

Lo and behold, in the April issue of the Buick Bugle magazine, I saw the ad for this one.  Garaged all its life, they just wanted it to go to a good home.  It checked all the boxes for what I was looking for.  I decided "Life Is Short." and figured out when I could take off and go see it.  The catch was, it was in Menlo Park, California.  I live in Maryland.

But what the heck.  I booked flight and hotel, and went out on May 7.  Drove it the next day and we made the sale.  The owner couldn't have been nicer.  His father in law owned the car originally, but commuted to work, so the mileage was very low.  Then they got it and only put 1500 more on it. 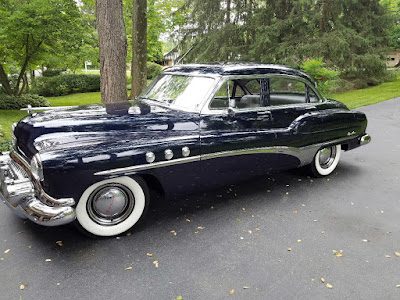 It was repainted, rechromed, and reupholstered in 2002.  And it never went east of Sacramento its whole life.  I booked a shipper and they picked it up a week ago. (The owner was out of town in between.)

I got the call yesterday at noon and met the shipper in a Home Depot parking lot. 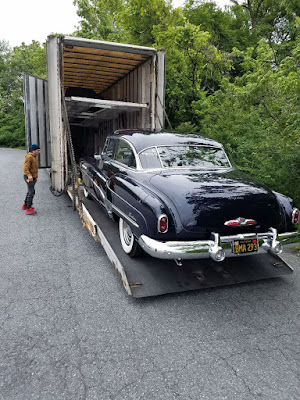 Took it home and introduced it to my old Ford.  To my surprise, the Buick is just a bit longer. 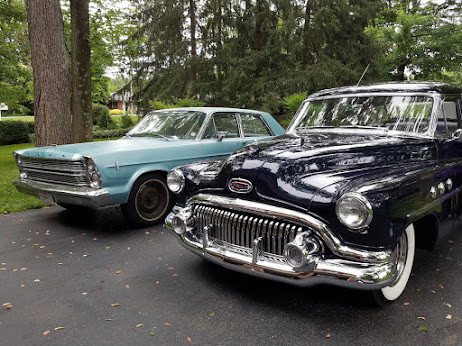 I've driven it now three times total.  It's a workout.  It's an automatic, but has no power steering.  It's going to take a while to get used to driving it.   I also got the shop manual, and reprints of the owner's manual, and a second book on the DynaFlow engine (inline 8 cylinder). Plus some extra vintage light bulbs, radio tubes, weather stripping, air ducting and a custom cover. 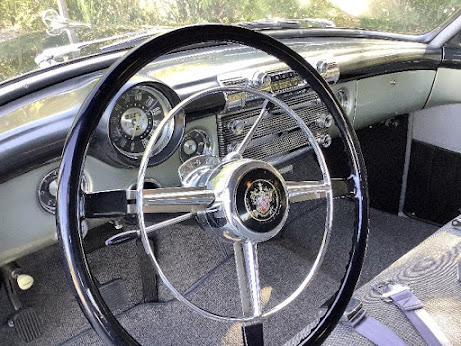 My favorite part is the piano style hood that opens from either side.  The engine was repainted with all the stencils and labels too. 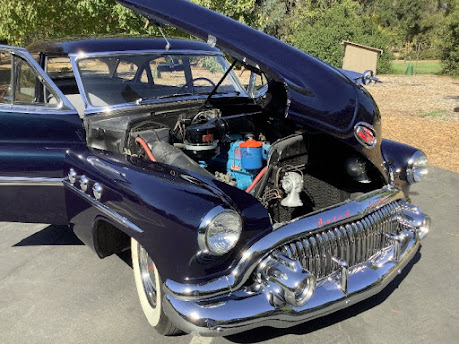 So Topps can celebrate their 70th anniversary and that's cool and all, but this car was made the same year they started and I like it's design much better.  I considered picking a card from the '51 Red and Blue Backs set to hang on the mirror or something, but there weren't any west coast teams yet, and I don't really have a favorite player that far back except for Willie "Puddin' Head" Jones, who I started collecting just to see the 50's cards.  I looked through the Topps World On Wheels set, but the closest thing there was a '53 Roadmaster convertible, which is just too different than mine.

So that's what I've been preoccupied with the last month or so.  I finally got some stacks of cards put away in the last couple days.  I need to get back to sorting my football hoard and generating more trades.  I've got a lot of work to do on all three cars now too.  Like my old boss used to say, "It keeps us entertained."

I noticed an oddity back on May 22 when I went to the Chantilly show.  I stopped by Uncle Dick's tables and found some upgrades to my 1974 Topps football set (among other things like 1957 Topps baseball from the bargain bin and several other base cards from different sets.)

(Uncle Dick said he was retiring, but he was there again helping the new owner out, wearing his flourescent green jacket and matching sneakers.  The guy is one of the all time legends)

Anyway, one of the cards I got was #32 Dan Dierdorf, the former offensive lineman for St. Louis, and broadcaster for Monday Night Football. 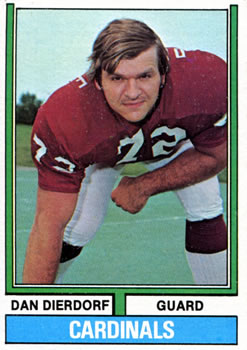 The weird thing is the team name in the blue strip across the bottom.  It's not a variation, but it is different from every other Cardinals card in the set. 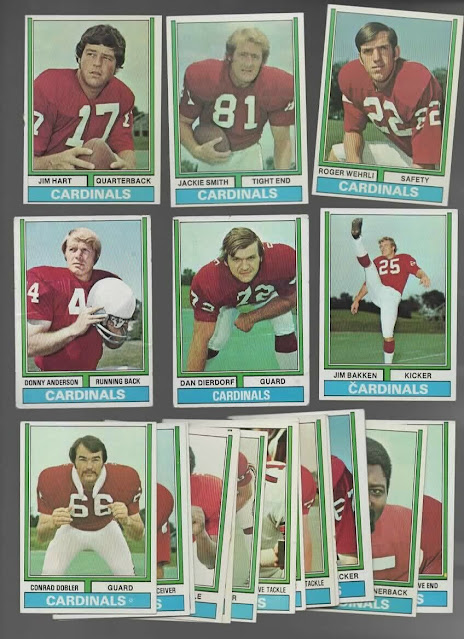 For some reason, Dierdorf's card has a narrow team name.  Every other card in '74 Topps football has the same blockier font.  I never noticed it before.  It's bizarre.

I'm gonna have to page through my set to see if there are any other mutant team labels now.  And my OCD is irrevocably tweaked by this.  It was already down a few points because of the Parker Brothers game variations in the set.  And now this...?

And just for fun, a Monday Night Football promo from back when the Washington franchise played well enough to make the highlights - a lot!

A Collective Convergence In California

Before it gets to be a month since I made the trip, I have to tell you about meeting up with one of my (and your) favorite bloggers.

I flew out to the west coast on May 7.  My primary mission will be described in another post (stand by Billy).  But since I wasn't far from San Jose - namely Menlo Park, California - I contacted Mark from the Chronicles of Fuji. 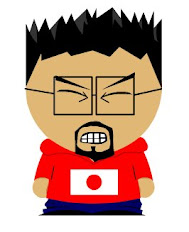 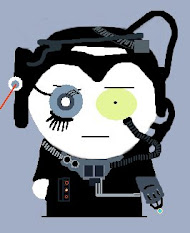 After I had concluded my business in the afternoon of May 8, he ended up driving north to pick me up and we went to a shop I had found on the map further north of my hotel.  It was Peninsula Sports Cards in Belmont.  Fuji said he had been to another shop under the same ownership that was closer to San Jose.

It was a nice clean shop, with a huge wall of wax boxes and packs on one side (all horrendously overpriced these days of course), some showcases in the middle with various sports cards, memorabilia, supplies, etc.  One case in particular had some interesting oddball sets.  And along a back wall there were bookshelves of older wax, some of which I had collected earlier, but was about three times the price I expected, which could have been just because of the time that had passed.  Looking at the photos on their website (above and below), there apparently used to be a whole wall of singles which now does not exist - much to my chagrin now.

Unfortunately, we forgot to take photos of ourselves to post on our blogs, so my crude South Park Borg drawing and Fuji's familiar character above will have to suffice.

After perusing the shop until the guy behind the desk said the alarm was going to activate whether he liked it or not, we left and went to Gotts restaurant and had some great burgers.  We talked about managing our hoards of extra cards, trading, and the current sales market.  Both of us have huge stashes of stuff we think people would like, but find it is difficult to get it to them for one reason or another.  We also agreed that if these flipper bozos want to pay exhorbitant prices for stuff we got for little or nothing, we are happy to oblige even though selling is not a primary part of our collecting life.

We did bring cards for each other as well.  He gave me a handful of Capitals stars, including a half dozen autographs of some of the older players.  Not worth scanning here, but much appreciated nonetheless!

Always cool to meet a fellow blogger in person, and especially one of the top guys!  Thanks for coming up Mark!  And if you ever get to the other coast, give me a call!

I went out the next day to find two more shops, including the other location of this group, since I had a lot of time to kill until my flight left late Sunday night.  I figured out how to navigate the CalTrain, which is the local commuter rail system starting at the stop across the road from my hotel and saw that one shop was a few blocks from the Mountain View stop.  The other was even closer (I thought) to the Sunnyvale station. 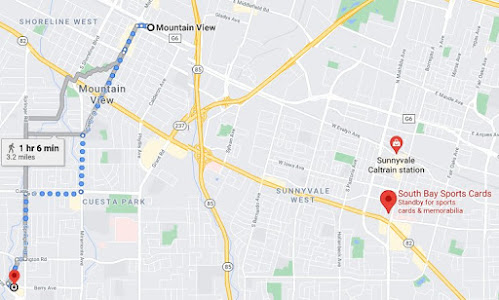 So I got off at Mountain View and headed south.  Stopping occasionally in a shady spot to see my phone's map program, I walked what seemed like forever through a very nice residential neighborhood in the California sunshine.  Trouble was, it ended up being a three mile walk.  And that shop was nothing more than two showcases with about a dozen individual autographed cards (priced with three crooked numbers), and a couple $199 blaster boxes.  I can't say I'd recommend Kip's Sports Cards.  I had to call an Uber ride from about a half mile from the train station over to the next shop, because after almost six miles, my feet were killing me.  The driver dropped me off at 101 South Murphy street.  I thought the shop was at #56, but it was actually at #566 S. Murphy.  So it was another two mile round trip on foot.  And that shop was nothing but overpriced wax boxes and a few supplies and nothing else at all.  Needless to say, the day was a bust and I just ended up going to the airport to kill the remaining six hours til my 1AM flight, which also had a 3½ hour layover in Denver.  I finally got home at about 2:30PM on Monday.

But you'll see in the post about what I did earlier Saturday that it was all worth it...