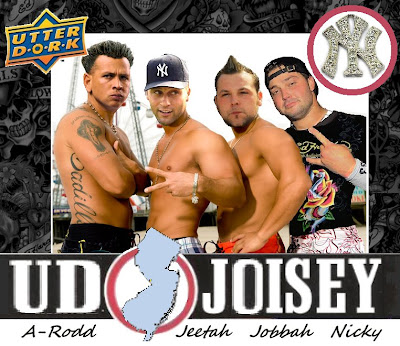 Now I'm not saying I think that these Yankee guys are really douchebags (OK maybe A-Rod) even though I'm an Orioles fan and have many reasons to hate on them.  This is more a What If? or alternate reality concept.   Collectors are always looking out for new innovations.  And the New Jersey phenomenon has become rampant (if not popular) in the media.  So I figured why not make the connection between super quad jersey mojo and Jerzguid Bros?

I was going to do individual cards of some of the more notable (douchiest) players, but the foundation of this card is a picture of the fellas from Jersey Shore, which worked well with the four players.  A-Rod looks the best as Pauly D, and the others came out pretty decent too.  Nick Swisher is more a whole body pasted over the original, while the others are mostly just heads.  The lighting is the toughest part is matching the lighting between the different picture elements.  Nick is as close as my old version of Paint Shop could get him.  Jeter's head could use a little more tweaking to match the body of The Situation better.

The custom logo was a bit of work to manufacture the "O".  And I'm not sure about the bling team logo.  It's kinda just stuck out there.  The Ed Hardy background ties it all together, especially Nick's custom shirt.  Had to make him more Officially Mockable.

I'm not sure that this card is actually proportional to 2½ by 3½, but I'm going with it.  We'll say it's a jumbo box topper.
Posted by GCA at 9:45 PM No comments:
Labels: custom cards
Newer Posts Older Posts Home
Subscribe to: Posts (Atom)