No Breakdown in this trade!

Thanks to defgav from Baseball Card Breakdown for some cool real cards, and some entertaining custom mock-ups as well.

He hit me with these two post-career Jim Palmers that I didn't have.  A remarkable feat since I have several pages of them in the binder, but don't have any of my player collection post-career stuff cataloged on my website, and only have a few players' post-career cards (including Palmer's) as scans and printouts that I keep with my lists that remain on paper. 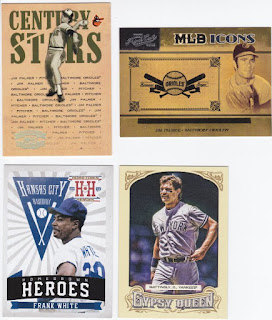 Also included were two set hits - the Homegrown Heroes insert from 2013 Hometown Heroes, and 2014 Gypsy Queen Don Mattingly which was one of the last three cards I need for that base set.  (Anyone have a spare Jeter and Rivera SP?)

The rest of the package was one sided printouts on glossy paper, cut to regulation size of some Orioles in the 1962 Topps design... 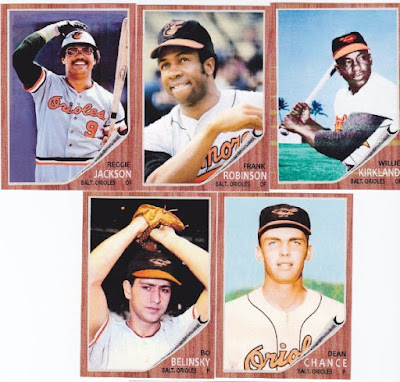 That Frank Robinson is fantastic.  One of these days I'll figure out how to print my own customs onto real card stock, with properly aligned backs and everything.

The last one, which he wrote his note on, had me LMAO.  Poor Billy is just the black sheep.... 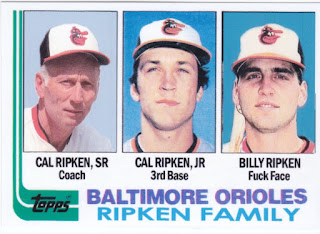 Three cheers for the Indians for defeating Toronto in the 2016 ALCS.  Finally, the frat-boy hotshot teams are losing and the underdogs are getting their chance to win! 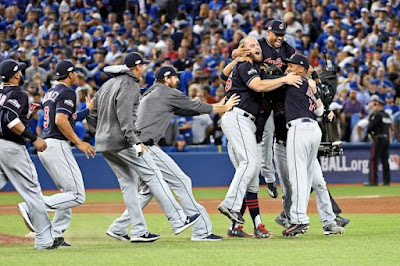 Now the Cubs need to get there too!
Posted by GCA at 9:48 AM 1 comment:
Labels: commentary

Gotta give the usually obnoxious Odell Beckham Jr, props for this one: 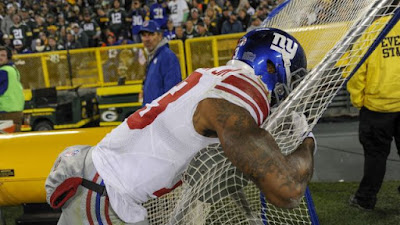 Nice to see they kissed and made up.
Posted by GCA at 1:25 PM No comments:
Labels: commentary

The Second Coming of #12 is imminent 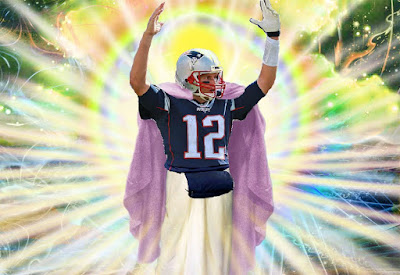 Watch out all you heathens!  The Savior of Sports is coming back!

We'll all be saved from the sacrilege of small market teams!  No more will you have to tolerate the mediocrity of semi-star quarterbacks!  The Light of the Sports World has returned!

Tom Brady, the most worshipped player in the NFL is set to debut for the 2016 season this week.  He returns from a suspension that many call unfair and unwarranted.  The "Brady Revenge Tour" begins on Sunday, where he will avenge his humiliation and take his rightful place upon the highest throne in the entire league.

All the sportscasters are raving about how wonderful it is that they get their favorite guy back.  And how it's so unjustified that he got suspended in the first place.  He's just the poster boy for high character and the greatest player since Joe Montana, Johnny Unitas, and Otto Graham combined.

Anyone that knows me well enough to hear my opinions of sports and football knows that I can't stand the guy.  I think he's an accurate passer that makes good decisions.  And that's about it.  Put him on Cleveland or San Francisco this year and see how much of a demigod he really is.  Bill Belechick's system and team culture are the real secret to his success by far.

Look what's happened this year.  Brady is out four weeks, so backup Jimmy Garoppolo (31 total NFL passes until that game - only four all last year) comes in and wins the first game, and is on his way to a second victory before going out with a shoulder injury early in Week 2.  Then third round draft pick Jacoby Brissett comes in and finishes that game and shuts out the Texans the next week.  During that game, he gets a thumb sprain and the whole thing falls apart against Buffalo Week 4.

So they went 3-1 with the backup and the third string QB in action.

What does that say?  It's a limited sample size, but to me it points to the fact that BRADY'S NOT THAT SPECIAL.  If those other guys can guide the team to wins, what's the big difference?  They win by more points?

But the real reason there's so much excitement is that all the sportscasters get their idol back.  They gush over this guy so much, I'm surprised there aren't puddles in the broadcast booth.  Anything he does is praised like he's the only one who's ever done it, like throw screen passes and flat patterns to make first downs.  OMG he's such an amazing godlike figure on the field, that they have to show him on camera every few minutes even when he's irrelevant to what's going on on the field.  They will mention his name in other games when analyzing the most minute details of a quaterback's throwing motion or decision on second and seven to choose the Y receiver on the curl route.

The predictions are that he'll come back his first week and throw five touchdowns or more.  Well, they're playing Cleveland, so it is actually a possibility this week.  But the whole concept of "Revenge Tour" is ludicrous, because what does he really have to be upset about?  To me, he didn't get punished for masterminding a conspiracy to deflate footballs so his opponent would lose a playoff game.  He got rigthfully suspended for not cooperating in a federal investigation.  He destroyed a cell phone that was requested as evidence.  I don't care if there's nothing on it besides Gisele's duckface portraits, it was evidence.  Oh, is he too good of a character guy to be suspected of wrongdoing?  Just ask Bridget Moynahan.  While she is incredibly gracious when asked about her ex, (who got with Gisele at the same time Moynahan found out she was pregnant with his son), it is reported that she makes people agree not to mention his name around her, be they family or co-workers.  He wasn't even with her when she delivered the kid.  Now Gisele spouts off about how good they are at parenting and consider the son to be "theirs" to a degree.  Brady doesn't say much.  And he shouldn't.

Anyway.  rest assured that all the media will be saturating the channels with talk about this so-called saviour returning to action this Sunday.  He'll be the headline story in what would otherwise be a low rated game since it's such a mismatch.

But that's the trend these days.  Hype the obnoxious players, especially when they're in the large markets.  You see the same overexposure to guys like Odell Beckham when he goes so out of control that he is punching at the head of Josh Norman last year, or recently almost injures himself with the kicker's net (that never gets old!), or Dez Bryant, who runs out on the field while his defense is playing to protest a referee's call, but somehow doesn't get a penalty himself.  They get more screen time for their rants, celebrations, and selfish antics than they do for their great plays on the football field.  The NFL penalizes taunting and excessive celebrations (sometimes too much), but the networks still see fit to put these guys on screen and glorify them.  Their rants and "look at me" moments are replayed before the commercial breaks.

Brady gets the same treatment when he's seen screaming at other players on the sidelines, or demanding a flag on the defensive player for brushing his helmet with their hand while attempting to block a pass.  You won't hear a negative word said against him, though.  It's all justified when Brady's involved.  Heck, they invented a rule because of him.  I won't even get into the Tuck Rule....

I'm going to try to ignore all the Brady talk.  I refuse to be brainwashed into their religion.  Hold fast to your faith in your hometown teams, my friends.  Don't be fooled by the Commentating Clergy, the Reverends of the Replay, the Holy Orders of the Halftime Show.  Don't worship this Deity of First Downs, this Savior of the Screen Pass.  Keep holy the deserving gods of the gridiron like Walter Payton, Reggie White, Deacon Jones, and Jim Brown.  Go forth and fellowship in the name of your favorite franchise!  Amen!
Posted by GCA at 9:00 AM No comments:
Labels: commentary, sports conspiracy theories
Newer Posts Older Posts Home
Subscribe to: Posts (Atom)