It's the end of the year awards show where the categories are all made up by me on the fly, and the winners are who or what I choose, which is probably in the minority of popular opinion.  At some point, maybe I'll come up with an actual statue design.  In the tradition of the Oscars, we'll call them the Borgs for now.

First off, the award for Best Base Design.  And the winner is, Allen & Ginter.

Base Topps was too foggy, Gypsy Queen was kinda weird.  Bunt was cool, but plain.   Stadium Club was decent, but the more I saw it, the less I liked it.  Bowman was similar to every year (all of which I ignore).  Panini Donruss wasn't bad, but kinda recycled.  Everything else is either high end, or not a regular set in the first place.  A&G is very elegant, even in black as X.

Next, for the Most Annoying Design Feature In A Base Set, Topps wins for the mist clouds.

Guess they were trying to create an ethereal effect, but it just looked like a brush fire at the ballpark.  They had a line called "Fire", but this isn't what they had in mind.

Stay at the podium Topps, because you win the next one too!  A second award for Biggest Attempt To Correct A Design Flaw goes to Topps Holiday.

The snowflakes look a lot better than the smoke, but they've only played a few games ever when it is actually snowing.   Well played, Topps, just in time for Christmas - yet another version of a set you already put out.

Now, on a more positive note, for the Most Original Insert Concept, the award goes to Pressed Into Service.

Finally something we haven't seen before that is directly related to games and that doesn't just include the same old players.  The blew the budget on the idea, because the design is a little lacking in the artistic elegance department, but kudos for the originality!

Continuing on the insert categories, the next award is for Best Continuing Insert Series.  The winner is First Pitch.

Love these in that the subjects are very diverse, though the team choices - not so much.  That may be just because of the predominance of Hollywood / New York / Chicago / Boston celebrities.   The design has evolved to match the corresponding base set in the last couple years, but they still have enough of a common thread to tie each year's series together.  Bonus points for the inclusion of some gorgeous ladies throughout. (I heart Haley Atwell.)

On the flip side, the statue for Worst Execution Of A Nice Concept (known as the UD Doc award) goes to Berger's Best.

What should have been an inspiring tribute to a man that was not only the heart and soul of the Topps creative team, but basically made cards in general what they were in the golden years and are still basically existing as today, ended up being another generic reprint set that only noted which cards were popular throughout the years.  None of them mentioned a damn thing about Berger's contribution to their design, manufacture, or anything.  They just had his picture on the back.  Way to respect your elders, Topps.

Speaking of history, the Borg goes to 100 Years At Wrigley for Best Historic Insert Set That Doesn't Involve the Yankees.

The Wrigley series is a nice unique design, with the elements of that ballpark easily recognizable.  A diverse selection of players (not just Cubs), events, and personalities makes these one of the best (and it turns out, most timely) insert sets they've come up with.  I'm even happier about them now that I finally found the Bryant #1 that I was missing.
And not to bash the Yankees, (even though I'm an O's fan and they deserve it), they just get overdone.

My candidate for favorite 2016 card comes from this, but it's so outside my wheelhouse, I don't feel quite strong enough to make that official (you'll see why), the Best High Odds Insert of the year is Topps Laser.

Basically, it's only because I actually managed to pull one that I even list this as a category.  Most of the time I consider stuff like this a pipe dream, but thanks to the box I got from Charm City Cards of Baltimore, I really did pull a Corey Seager Laser Relic two color patch!  Real nice design in a booklet card no less.  And I own one!

The "opposite" of that award is the double combo of Best Mojo-less Set and Best Rookie Saturation-less Set.  And the hands down winner is Topps Bunt.

I said it before.  Watch out Topps!  I wouldn't be shocked at all if this product OUTSELLS all the other high end, "thuper mojo hitz" products, AND all the 100 real players + 350 rookies stuff that's put out COMBINED!  Boost the graphical quality of the design with brighter colors and a little more dynamic look, and you'll have a huge sellout!

And the final award of the evening is also the biggest and far reaching.  The prize for Corporate Monster Stomping On The Hobby goes to all the major companies for Sport Exclusive Deals.

You know the deal.  We all say it.  Exclusives benefit no one except the one company that can make proper cards for the sport any way they choose.  Creativity doesn't thrive.  Other companies efforts that would normally have surpassed the exclusive holder's offerings are opressed by lack of logos, team nicknames, and cropped photos.  The promised innovation is a joke.  You want innovation?  Let them all compete against each other in a level market and see how they'd have to come up with original ideas to keep ahead of their peers.   Rant over.

We hope you enjoyed tonight's show even though there were no poignant acceptance speeches, entertaining introductions, musical numbers, or hot babes leading the winners on and offstage.

Just got my package today from Robert at $30 A Week Habit.

He emailed me a little while ago inquiring about trading me some 2002-03 Pacific Quest for the Cup hockey cards.  I sent him some vintage baseball in return for these: 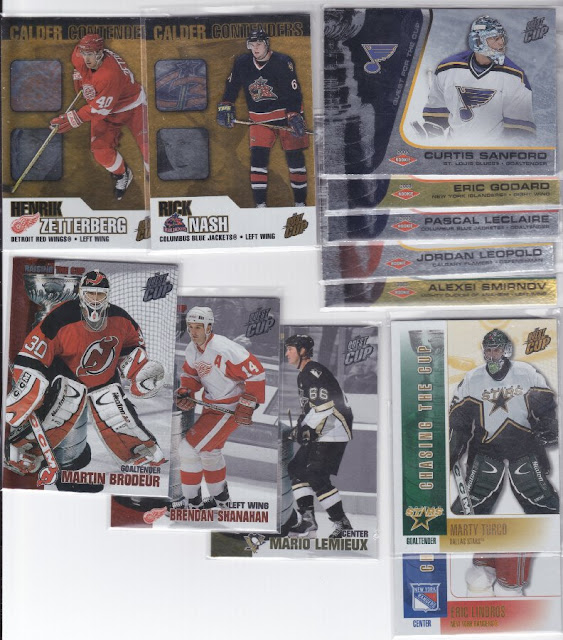 Quest for the Cup is one of five Pacific sets from that year that I'm building.  It's also one of the shiniest.  I'm also finishing Calder, Heads Up!, Vanguard, and Private Stock Reserve.  Haven't even started the flagship set yet.  I got most of them from cheap boxes I bought on Atlanta Sports Cards (site offline at time of writing) site a couple years ago.  They had most of the Pacific products from this era at very low prices.   2002-03 is my favorite hockey year for hockey cards.

Robert started with five rookies from the end of the set.  Two of them are the gold parallels, but I crossed 'em off anyway.  Pesky rookies.   Sometimes I skip the rookies at the end of hockey sets.

Then we go on to the inserts.  Calder Contenders in gold with the inset pics of the logos and the players.  I like that they didn't use an "echo picture" in these, and didn't distort it.  That just weirds me out.

The Chasing the Cups are kinda generic, but nicely colored.  The backs are nice, with another second photo and a simple layout that you can read.

Raising the Cup cards are what I consider the marquee insert for this set.  Matching the base cards with the Stanely Cup featured as prominently as the player photo, but not overwhelming it.  These make nice use of team-color foil as an accent behind the cup and enhancing the name and title.

Hadn't had hits to any of these sets in quite a while.  Always fun to trade with blogger guys and see your stuff on their site.  Thanks again Robert - until next time!

Posted by GCA at 8:30 AM 2 comments:
Labels: blogger trades

I hate to be "that guy" again, but it's getting ridiculous.  I don't post enough about football to show that I'm really not a total conspiracy theorist and hater.  It just comes across that way.

The last week or so, it seems like there have been a few things that make ya go "Hmm..."

Dallas played on Week 11 Sunday at 1:00 vs. the Ravens.  Washington played the Sunday night game at 8:30.
The next week they faced off on Thanksgiving in Dallas.  Was the seven hour difference an advantage to Dallas?  Not sure.
The next game Dallas had wasn't until the next Thursday, (last night).  They had the whole seven days off.  The Vikings played the previous Sunday.  Dallas gets the extra rest again.  Advantage?  Maybe, maybe not.

I was actually surprised that there were no egregious calls during the Thanksgiving game that influenced the outcome.  Washington was competitive, and the game was played well by both teams.

Minnesota was not so lucky last night.

At around 6:45 to go in the first quarter, Zeke Elliott fumbles.  He clearly loses the ball, then falls on it and has it in his hands.  Anthony Barr of the Vikings jumps down and pulls it away.  Quite often during the average fumble, there is a pileup and the ball passes to a few different players until they get sorted out.  The last guy with the ball generally wins.  In this case, Elliott acknowledged he lost the ball and the offense started moving off the field.  But then the officials decided it needed to be reviewed.  After going under the hood, they decided that "the ball was recoverd by a Dallas player and then taken away by a Minnesota player."  Dallas ball.

Then, with ten and a half minutes left in the fourth quarter,  Dallas punts.  Adam Theilen of the Vikes catches the punt and runs a little ways to the side and is tackled.  Dallas players came off the tackle with the ball.  Dallas challenges the play.  It is determined that Theilen fumbled just before hitting the ground.  As he rolls over, the ball is loose, and then he gets it in both hands before a Dallas player pulls it away.  It is again ruled Dallas ball.  The next play is a Dez Bryant touchdown.

So in both cases, there was a legitimate fumble, recovery by the same player, and then an opposing player with "simultaneous possession" pulls the ball away.  Both times, Dallas gets the ball.  But they weren't the ball carrier to begin with in the second instance.  If the Vikings take the ball away, according to the refs, it's Dallas ball.  But if Dallas takes it away, the refs say they get to keep it.

I say they can't have it both ways.   Glaring double standard.

Are we going to start a debate about "what is a fumble recovery?" now, like there is for "what is a catch?"

Or is it just that Jerrah's team is on another nationally featured game, so they get all the breaks?