For a year that promised recovery from the pandemic, and a return to normal life.  I think 2021 was a bit of a disappointment.

I will say that we were able to return to card shows and shops for the most part, and there were signs that it was again possible to buy cards in retail stores.  But that may change again with the possible reinstatement of mask requirements and schools and businesses returning to restricted capacities because of the new variant virus.

So where am I as a collector now and what have I learned about collecting and buying?

Boxes of new cards are still often double or triple the normal prices from a couple years past.  The influx of new flippers and "investors" seems to have leveled off - many of them saying the market has collapsed.  Which doesn't bother me a bit.  I'm not in it for the money. But there are several big money cards that I need to finish sets that I don't think I'll be able to touch any time soon. 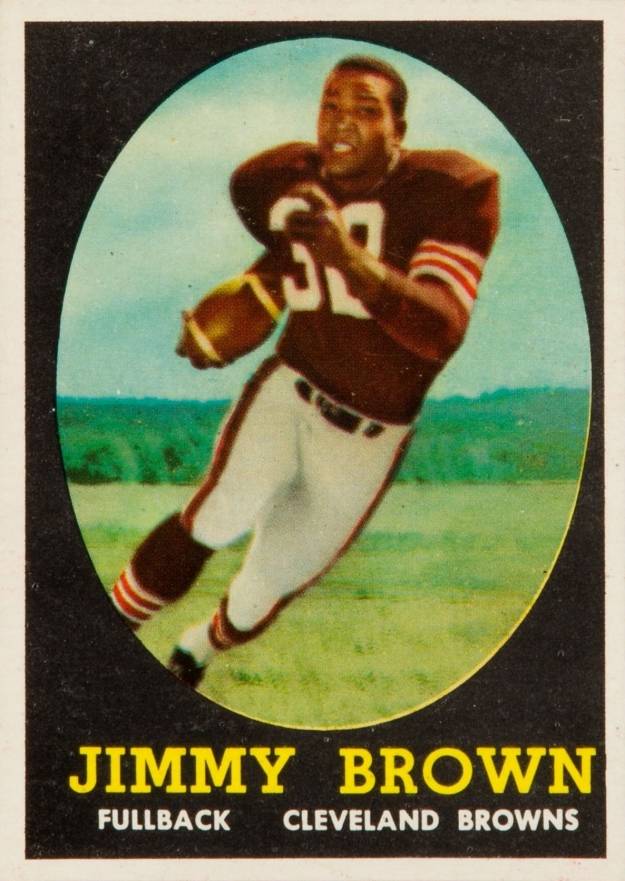 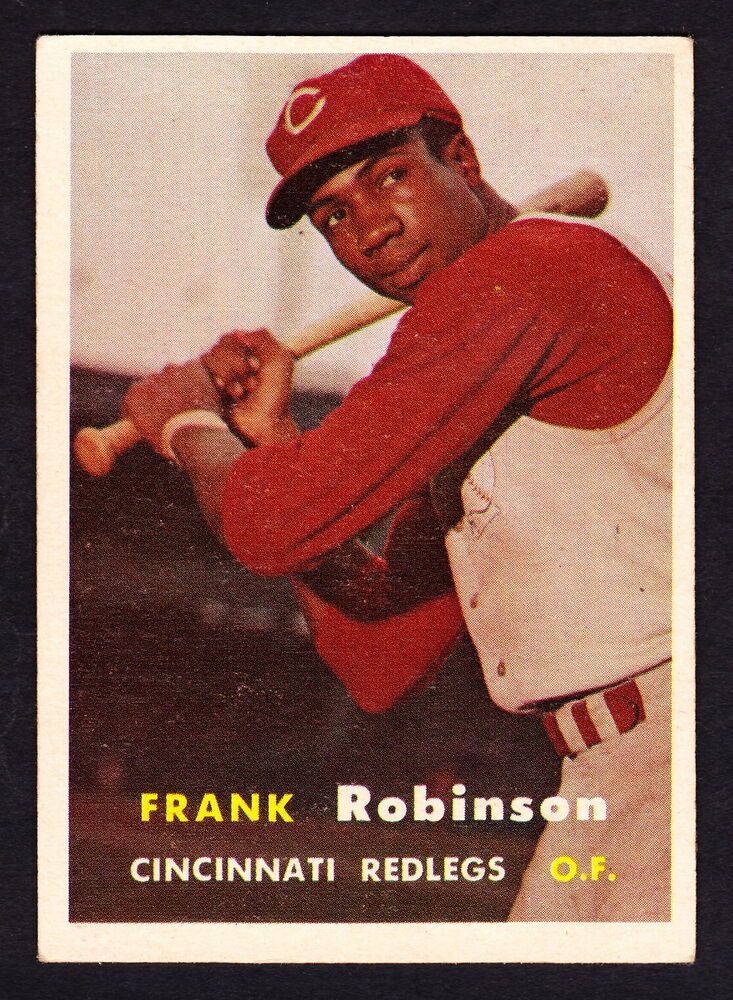 Fanatics has wrangled the exclusive MLB license for cards starting in 2025.  Ever since exclusive licenses became a thing, the new products have generally become stagnant or lost variety and creativity.  If you've read any of my posts or comments elsewhere this year, you know I stopped collecting Topps flagship after 2020.  And it was a good place to stop.  2021 Flagship is nothing but recycled designs.  I did a post about it already, but here's a good illustration...

There are only three typical inserts.  They're stat heavy and all are just groups of star players, but at least they are new designs. 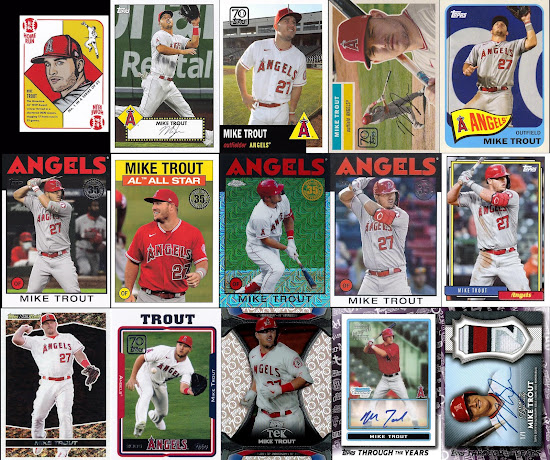 These are inserts that recycle old designs.  The first one might be an online exclusive, I wasn't sure.  The rest are all from 2021 Topps flagship.  The last two are regular cards with images of autos & relics.  This group doesn't even count Archives or Heritage, which would add at least two or three more to these fifteen.  FIFTEEN recycled designs!  Before 2019, you could hardly amass this many cards of one player in old designs in the whole decade.  This is from ONE YEAR!  OK, I've ranted about this enough.  Let's see if they come up with something different in 2022.

I've known for some time that old school set building and the values and practices that come with it are not what the hobby caters to.  And I was OK with that.  With the stampede of new people in the hobby the last couple years, that separation has increased dramatically.  Before, there were almost as many tables at the average show that dealt in vintage, or new base and inserts, or just regular cards from older sets in between versus the "mojo tables" of nothing but the current rookies and superstars trapped in plastic slabs and marked with artificially inflated prices.  Now, the balance has tipped, and the percentage of new crazy stuff I don't need is about two or three to one against the things I'm looking for, instead of 50/50.

The last show I went to down in Virginia had about 40 tables I'm guessing (it was all in a regulation basketball court), and only about five or six had dime boxes, vintage (mostly overpriced), or current-ish base and inserts (and a lot of those were Bowman).  There were a few tables with superhero statues or Pokemon type items, which I don't usually see at regular card shows.  Almost everything else was Bowman singles, graded mojo hits, or gamers and autos sorted by player or team.  All of which I will walk right by.

I'm also stuck in the mindset that hobby boxes of regular sets should be $50-$80 and blasters of anything should be $20.  Rookies of guys like Clemente and Jim Brown should maybe reach three digits, (for a nice raw card - I still don't deal in graded) but common singles should be about a dollar each for the 60's and about 50¢ for the 70's and 80's.  New singles should be no more than a dime and inserts should be 25 or 50 cents.  Current rookie base cards should be a buck or less and never even sniff the thousands, even if they are low numbered parallels.  Nobody is actually paying that in real life except for a few fratboy millionaires, are they?  When all the flipper bro's get bored and move on to something else and the prices come back to what they were in the mid 2010's, call me.  I'll be here sorting my latest SportLots order of obscure oddballs for my player collections and the last few 80's Fleer team football sets.

If current cards degenerate into digital rookie mojo limited editions, then it'll allow more time, money and room for older and more interesting cards.  I've still got plenty of sets to complete, discover and enjoy, in several sports and a few other subjects.  Should current cards stop completely in the 2020s, then I won't have to figure out where to store them once I run out of space here.  Which may have happened already.  (You can't see the dozen monster boxes on the floor and couch in these shots). 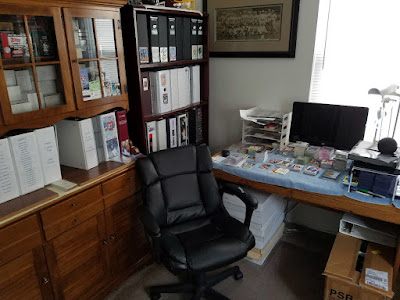 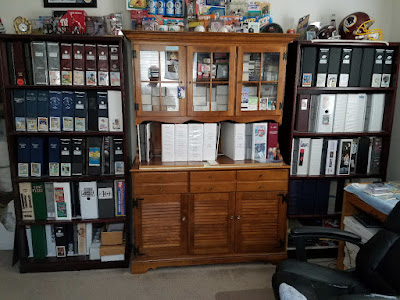 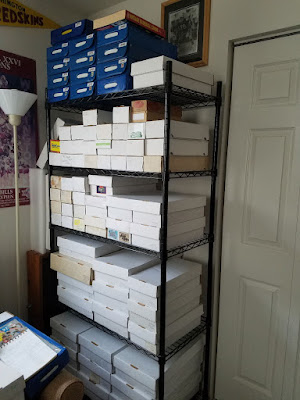 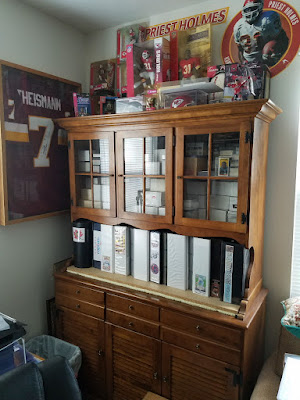 I plan to move at some point next year into a single family house so I can have all my automobiles within reach as well as more space for all my other junk.  Then I could buy more hoards of bulk cards that no one wants and knock out my older wants and trade or sell in big batches again.  (I still have to do that with the stack of monster boxes of football cards I have now).

I'm still going to shows when I can, though in the spring and summer, I may skip them once or twice in lieu of a car show.  Gotta keep the ol' Buick out there.  I'm putting another SportLots order together right now, and just got a COMC order about a month ago.  I said I was gonna post them here, but I never did.  Some of my old Yahoo group have reached out for trades recently, and I've had a couple on the Database as well. My blogging has dropped off to about nothing this past year.  I went from just under 140 posts in 2019 to 88 last year and only 21 in '21 (counting this one).  Hopefully, that number will rebound, but being that I'm not the typical collector, I just don't have as much to say about what's going on in the hobby (except that I'm not a big fan of most of it).  I get tired of ranting about the same things, but have trouble finding new and interesting facets of my collecting to share.  We've still got a few years to wait for Fanatics' "innovations", but we heard that from Topps and you know what we got (see above).  If working from home comes back, maybe it'll give me time to come up with new ideas.