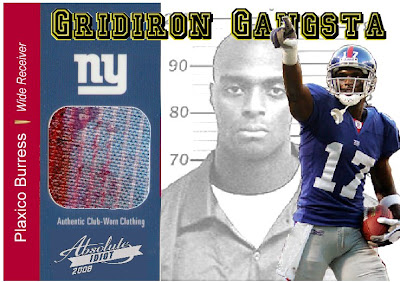 Commemorating the well-publicized gaffe of New York Giants receiver Plaxico Burress.  As you'll recall, in November of 2008, Plax got busted on a firearms charge after shooting himself in the leg in a New York City nightclub.  He was released from the Giants in April of 2009.  Vowing to return to the NFL, he is scheduled for release on June 6, 2011.  (Update: he's out!)
The name and position are a little generic, but I think the rest works pretty well.  Note the bullet icon after the name.  This is the first of several potential cards from this product line - (Panini/Playoff) Absolute Idiot.  (April 2011)
Posted by GCA at 11:09 PM No comments:
Labels: custom cards

Package showed up last week.  They came USPS, naturally, since I ordered them via UPS, which was cheaper. Priority Mail shipping was just under $5.  My cost was $16.  Guess that paid for the new top loaders and sleeves.  I don't have much of a beef with that.
And I'm surprisingly pleased with what I got.  The vast majority of the older cards are in a lot better shape than I had expected.  My '55 Pascual RC is pretty sharp: 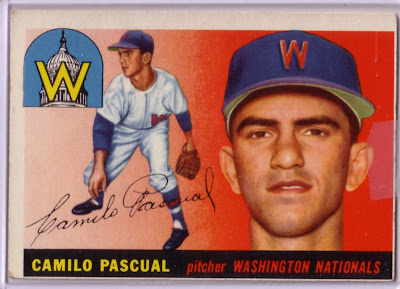 It's off-center a good deal, but that's the total of the defects, really.  The tape at the right side is just what's keeping it in the standard size toploader.
I also got a couple of '57s that I had a lot of offers on. 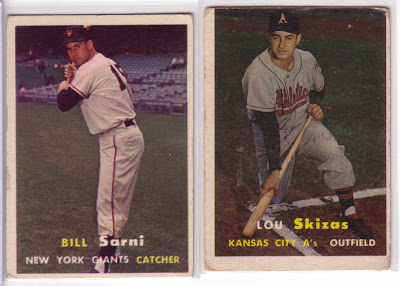 One is great and the other is probably the worst shape card in the bunch.  Could have entertained an offer for that one, especially since I saw it at a show for about $3.
The next one is another Senator card, this time from 1960... 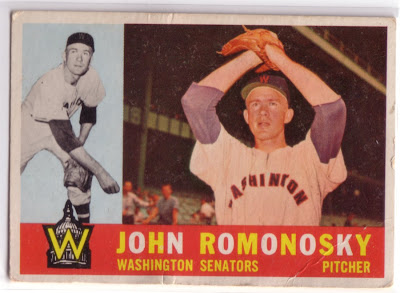 He's a bit rough on the edges, and has a crease across the SK, but otherwise nice to look at.  The more I see '60's in person, the more I like the set.  I just don't enjoy the prospect of collecting the set in 8 pocket sheets where they tend to slide out.  That will be a while down the road, though, since I just started the 1959 set before it...
Next up is a card that I couldn't manage to trade, so I had it shipped since it was an older one. 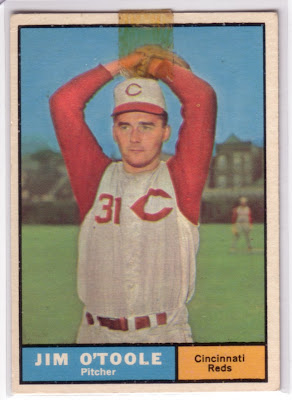 Ol' Jimmy boy has an ancient piece of that tape with the threads in it from the front, over the top to the back.  Otherwise, this would be a pretty nice specimen too.  I managed to peel and scrape the tape off for the most part, but he's wounded for life.  Anyone starting a beater set of '61s?
This next one is a cool looking card, 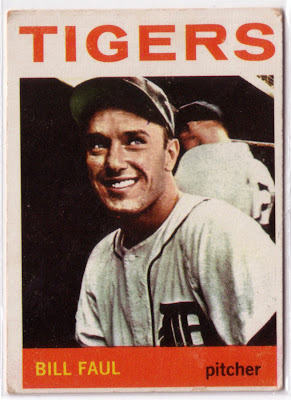 Tiger Bill has mostly beat up corners, but I like the photo and design.  Plus I know some people up in Tiger country that could move this one pretty easy if I decide to.
This next one was the most anticipated card in my batch.  It fills a hole in my player collection... 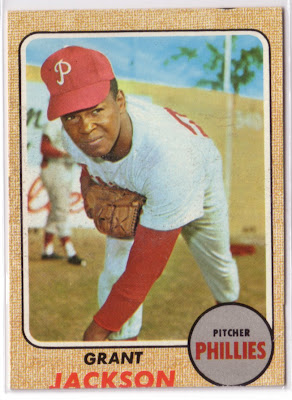 This is not a cropped scan however.  The back is centered properly, but the front is way low.  You can see the bottom bit of the circle on the card above at the top.  Oh well, for a high number, it was worth it.
The rest of these were targeted to backfill my sets after I had originally pulled my player collections out of them, so they are all second copies. 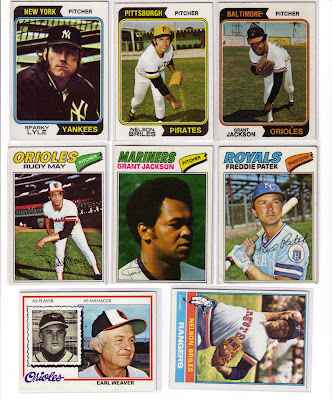 Everybody here is a player collection replacement, except Earl.  When I got him, I figured he was just a bonus, but it turns out he was an upgrade of my set copy too.  With the exception of Patek, these are all basically pristine.
Bonus Earl was a good thing, considering this next bunch: 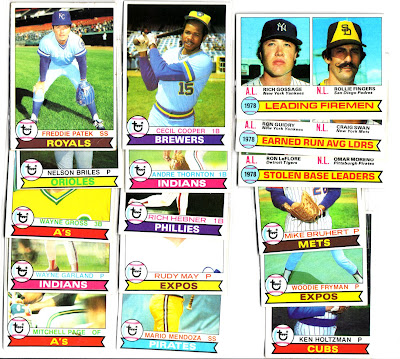 These are all condition replacements (and a few player 2nds) for my '79 set.  These were the bulk of my Millions trading successes.  And they really were upgrades, being mint across the board (except again for Patek).  Unfortunately, when I went to put 'em away, I discovered that I had already replaced about nine of them.  I'm normally really good at keeping lists updated, but dropped the ball on my upgrades this time.  Not a big deal, I didn't have many good '79s to trade.  Kinda sucks paying for shipping of dupes though.  But all was not lost, the team cards I got to upgrade marked checklists showed up like this: 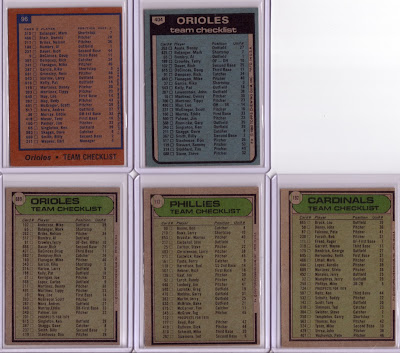 All nice and clean, sharp and unmarked!

Kudos to Topps for a successful program.  I think the Diamond site is a downgrade as far as performance, as well as look & feel.  I liked the Millions site better because you can see more than a couple of your collection items on a screen.  But that's for another post.
Posted by GCA at 8:45 AM No comments:
Newer Posts Older Posts Home
Subscribe to: Posts (Atom)