My card room...or room and a half, actually

Well, it's a little late to the party, but...story of my life.

I saw the post on My Cardboard Habit  (via BB Card Breakdown) about the contest that had just closed where collectors showed pictures of their card rooms, and everyone voted on who had the coolest one.   I had taken a few shots of mine to show some friends I was visiting a while ago, but wasn't in time to put them into the contest.  I figure I'll go ahead and show them here, plus some more I just took for complete coverage.

My card room isn't just one side of a room, but actually inhabits one whole room in my townhouse, and spills over into the adjacent room as well.  Being primarily a three sport set collector, who also has a football team collection, plus over fifty player collections, my total volume is a bit higher than average.

I'll start in the "computer room", which houses my main staging area for pulling cards and packing them for mailing.  There are several boxes of cards here that don't actually count towards my collection because they are all tradeables or duplicates.


The monster box is all my dupes/tradeables from 1980 thru 1993.  The smaller ones are more current set dupes.  The little piles are mostly either inserts, game-used, oddballs, or cards I've pulled for certain people.  My 1993 thru 2003 dupes are in a monster box on the desk with my computer on the right side of the room (not shown). There is another box under the desk of mostly 2005 singles, and another against the wall of 2004 thru 2010.

As you enter, you notice the Priest Holmes Fathead on the wall next to twin china cabinets.... 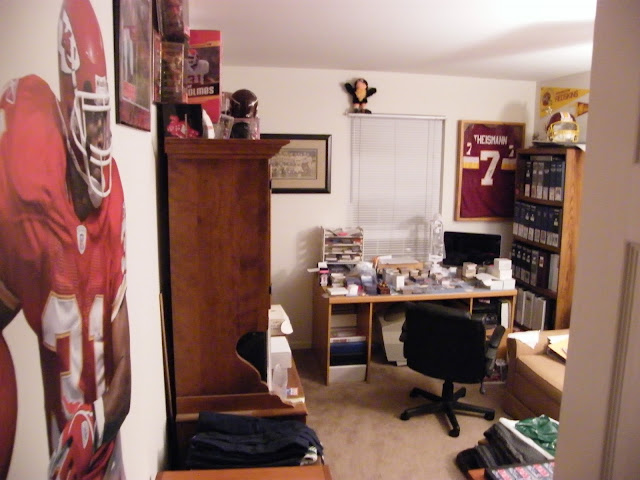 The desk in the middle is where I sort sets and file away my newest acquisitions after I take them off my wantlist website in the other room.  On the wall is my prized team photo of the 1909 New York Giants baseball team, and my signed Joe Theismann jersey.  You can see the Giants pic on my want list site, which at the time of this writing is jacked up for some reason.  There's a whole story about how I got the picture and what came with it, but that's another post. 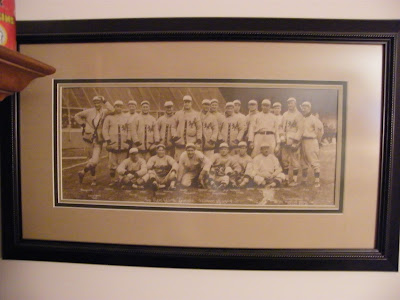 Anyway, continuing into the room, here are the two china cabinets.  They make great storage for cards with the windowed cabinets up top, the bottom cabinets for set boxes, and the drawers for convenient storage of supplies. 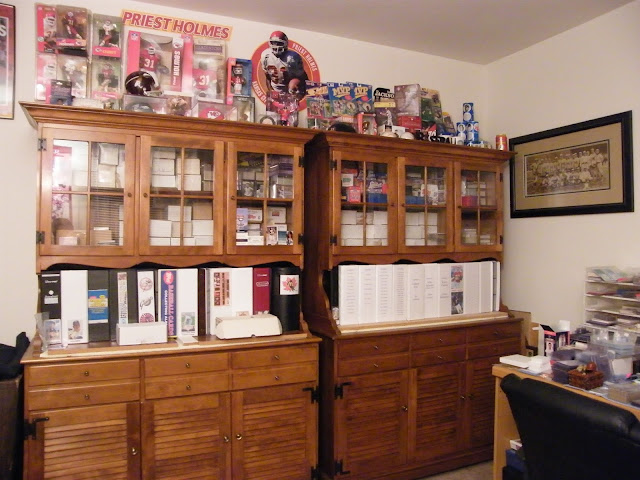 The small drawers are even better because they are originally made for silverware, but top loaders fit right between the rails, which makes storing game-used and autos really nice. 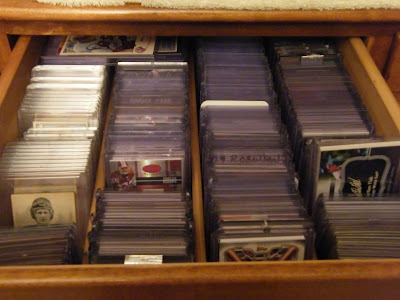 Here are the cabinets fully open.  The left cabinet is all baseball.  The right one is football and hockey, hence it's not quite as full.  Binder space in the room is at 100%, so they are a mix of everything. 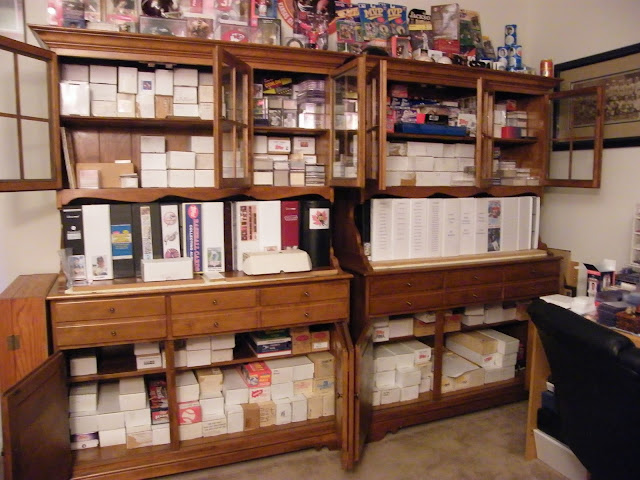 On the right, you can see my (baseball) player collection binders, and Priest's.  The first four are my vintage players, and the other three are the newer players that spanned into the 1990's which means they have tons more cards than the other guys.  So only a couple guys fill the entire binder. 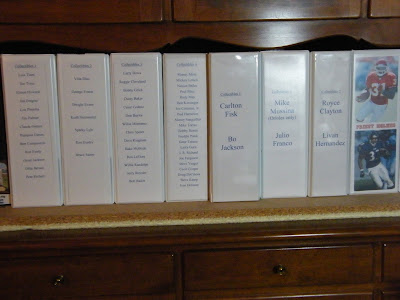 On the other side of the  sorting desk is the main binder shelf.  I really need another one of these because I have some more vintage sets etc. that are ready to get sheeted up.  But there isn't anywhere to put them yet.   My baseball set binders are sort of color coded by decade.  Grey for 60's, Blue for 70's, and Black for 80's, though most of my 80's sets are still in boxes.  I pick out the most colorful and interesting cards to make the printed labels from (I don't use real cards).  And I have a rule that I try not to use the same team on two labels.  The first reddish brown binder was the first one I ever owned. 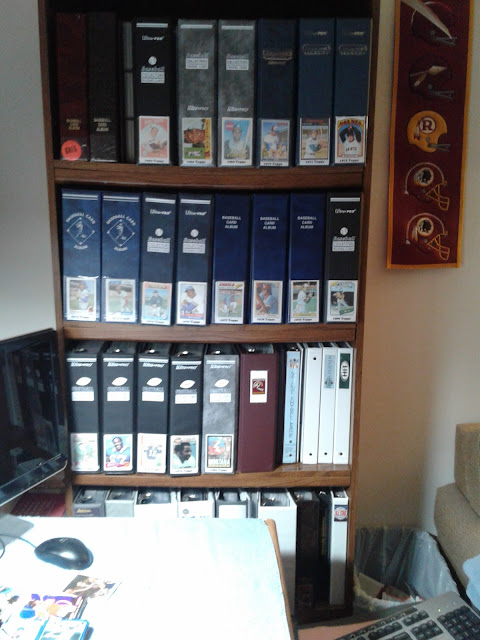 Around the room you see the couch that is more often holding some boxes and books than people.  Next to that is the wire rack that holds the larger boxes that don't fit into the cabinets or that hold sets I'm still actively working on. 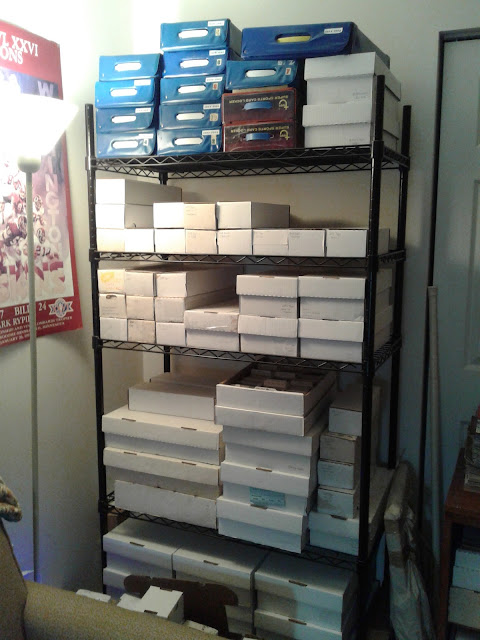 On top of the rack is my Redskins bulk collection.  The '40's thru the early 80's are in a couple binders, or in the drawer.  The rest are here in the old vinyl carry cases that I used to use before white boxes were really the norm.  They are great for team collections because they have 30 separate slots that you can segregate each year's cards by company.  I put Action Packed and Bowman in the first slot, and then alphabetically (Donruss, Fleer & Skybox, Pacific, Playoff, Press Pass, Score, Topps, Upper Deck) etc.  Nowadays it's more like Bowman, Donruss/Panini, Score, Topps, and I can get four years in one case instead of just two.   Luckily, I've been able to find these cases here and there through the years, so I can keep my collection consistent. 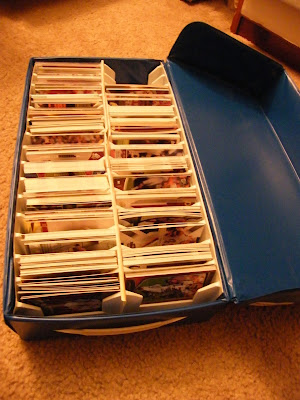 So besides the one little overflow shelf, you're back to the doorway of the room.  Hadn't planned on keeping that little shelf in front of the closet, but I'm at full capacity until I figure out another arrangement that allows more binder space. 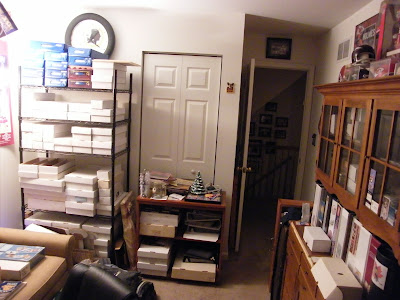 The other things I'll give you a better look at are the non-card items that I've gathered while amassing this much cardboard.  I try not to get into too much peripheral stuff since space is at such a premium.  But as a player collector, you do run into some unique things that you just have to have.

My Priest Holmes non-card collection is on top of the baseball cabinet.  I've got all but the scarcest figures and McFarlanes of the running back who won me two fantasy seasons.  I just need a signed Texas helmet and this collection will be just about complete. 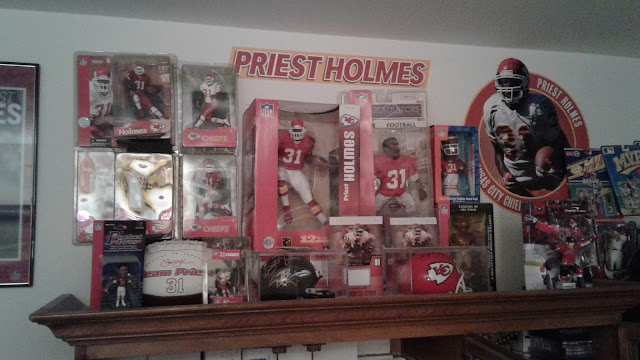 The other side is all oddball items, mostly of my baseball player collections.  I guess to be consistent, I should swap them with the Priest items.  There are also autographed baseballs from Jim Palmer and Brooks Robinson, plus bobbleheads from players on my local favorite teams. 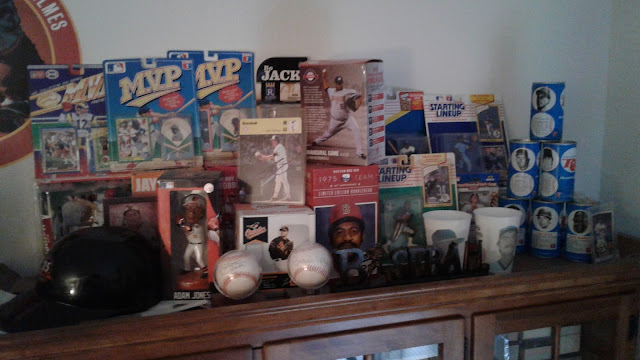 So there you are.  That's my card environment.  Don't know if I'd win for coolness, but I think I got the sheer volume prize locked up.  Except if you see what my friend Stuart has.  He doesn't have one or two rooms...he's got cards in EVERY room, and in multiple other houses.
Posted by GCA at 8:57 AM
Labels: card room, How I do it, My stuff