Bought my two boxes of 2016 Topps Update last week (thanks, Blowout!) and got three cards away from two base sets.  Second box duplicated several inserts, which annoys me while I'm opening the packs, but makes for trade bait, so I'll get different ones eventually anyway.

One insert set I noticed was the "Team Franklin" set.  I put "Team" in quotes, because the only indication of that notation is the card numbers that are preceded by "TF-" on the back.  Nowhere else on the card is it mentioned.  Struck me as kinda weird, but taking a closer look, I felt like this set wasn't finished yet.  Looked to me like they stopped after adding the first couple design elements. 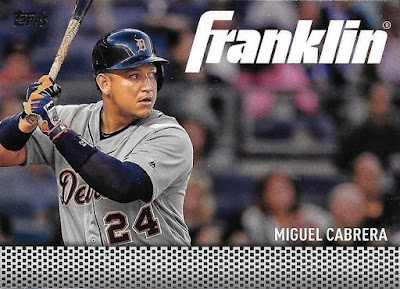 There is only the Franklin logo, a name, and a seemingly irrelevent metallic mesh strip along the bottom. 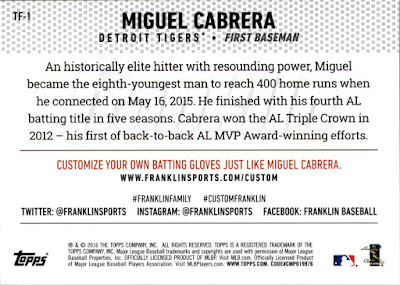 The backs are all text, with the name, team, and position over a ghost image of the metallic strip.  Then there is a standard player accomplishment blurb, followed by an ad line for batting gloves, and several social media and web links to Franklin.  And of course, Topps' copyright and misc. logos.

They are really kinda phoning it in on these.  If they are really an attempt to partner (and actively advertise) on a trading card - which is kinda scary -  then show the product!

Make 'em look like a glove.  This concept could even work as a die-cut with the velcro strip.  Color them to match the player's custom gloves. 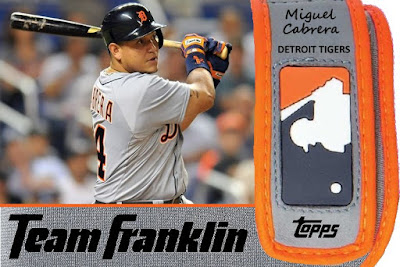 On the back, we don't need to read about each guy's accomplishments again.  Leave that for their base cards, their All-Star cards, their inserts and almost every other card with their photo on it.  This insert is all about [selling] gloves!  Let's see each guy's custom gloves!  That's something we've never seen before on a card!  They could even write about how they like theirs customized in certain ways, or the different modifications or specs they've tried. 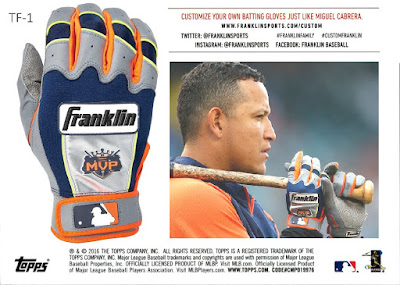 If it wasn't such blatant advertising, it would be a really nice unique concept for an insert set.  You never see anything about the actual gear that the players use, except for the fragments of some of it in memorabilia cards.  A focus on the gear is an interesting departure from the same old thing.

Oh, and by the way, I must protest Team Franklin card #12.  Dustin Pedroia should have been banned from this insert.  Or the card should at least say why he has to adjust his dang gloves after every pitch, whether he moves at all or not!
Posted by GCA at 9:00 AM
Labels: commentary, custom cards, design revision