The King Of Junk Wax

That's what I used to call myself during the last few years I went to my best local card shop.

Since I had skipped over the overproduction era, I spent some time during the mid 2000's in the back room dusting off the boxes of the first few years of Upper Deck, etc. mostly filling in my player collections that extended into that period, and also completing the occasional set that caught my eye.   I was usually the only one who looked at that stuff, since everyone else already had it in excess.

I'm still filling gaps in my set collection.  At this point, I'm pretty much going for Topps completion, since all it will take to get 1969 thru now is a few from the 90's, and I'm warming up to a lot more than just certain sporadic ones from other companies.

Which leads me to this particular purchase.  It's part of a major batch that also included several more sets and a pile of singles as well (the others will appear in future posts) from the great guys at Collectibles Unlimited in Clio, Michigan.  This particular visit was our second in the time I was in the state.  We got exclusive access to what I'll call their "special inventory".  Sorry, folks, you'll have to earn that privilege on your own.

This particular item was previewed in the overview post I did on the whole trip.  It's something that most of you set builders took care of long ago, but I never have until now.  The premiere edition of Upper Deck baseball - 1989. 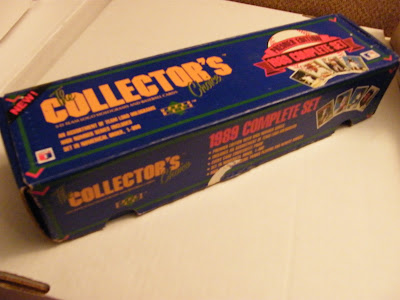 Got the factory box flavor and everything, which makes it nice, even though I usually like to hand collate sets like this since so many people are willing to send me singles.  But having the proper box already sorted is good in this instance because of all the other stuff i still have to plow through.

Now the next thing you want to see is card #1, right?  Well, I hate to disappoint you, but Mr. Griffey was not included.  I actually didn't see any raw examples at the National, so he's now on my want list.  The set starts with #2, Mr. Medina here: 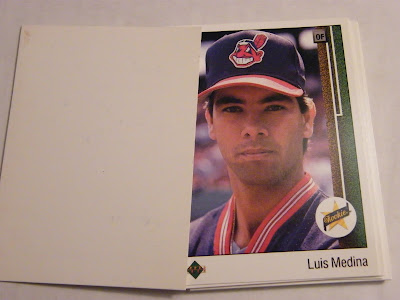 But at least the rest of it is done.  I now have the first four UD sets, and am working on Collector's Choice completion too.  Don't think I'll get close to Upper Deck flagships for all the consecutive years for a good while yet.   Still picking and choosing which ones I like.  I'm sure I'll find KG Jr. for a price I like and can then move on to the next set.
Posted by GCA at 8:00 AM
Labels: dealer purchases, Michigan haul