Blog Bat Around: What Was The Toughest Set You've Completed

Late to the party on another trending topic, but here goes.  Maybe I should start posting more than every other day.

Anyway... The question is officially "What is the toughest set that you have ever collected (or tried to collect)?" There are several possibilities for me...

1. 1909 T205 New York Giants team set.  Status: In progress
See my progress on my want list site.  I'm down to seven left out of twenty-two total.  Age and expense are the main hurdles to getting these.  And then there's Mathewson - 'nuff said.

2.  2002 and 2003 Upper Deck 40-Man.  Status: Complete +
I finished both base sets and even the Lumber Yard inserts from 2002.  Still need a few McGwire Flashback inserts.  The other inserts are GUs, so they don't count.  Talk about sheer volume!  Base sets are 1182 and 990 respectively.  (Guess they figured they'd tone it down in 2003.)  The only set I can think of that is larger would be UD Documentary, but that was games, not players.  I really like the 2002 design, though.  I'm currently working on the football version - UD XL which is just about average at 600 cards.

3. 2007 Sweet Spot Classic jerseys  Status: In progress
I'm down to relatively few of these (there are 95 total), but the ones I'm missing are the high dollar ones.  These are one of my favorite sets in that the photos aren't the same old ones you always see, especially of the older players.  They're so crisp and colorful.  I don't usually go for gamers except the one or two that come out of packs I open, but in this case, the base set is serial numbered to 575, so I haven't even come close to that.   And I've often wondered if the swatches are really from the player pictured on the card or not.  The cards say that the memorabilia has been used in a MLB game, but doesn't say "by <this player>".  Here's what I am missing: 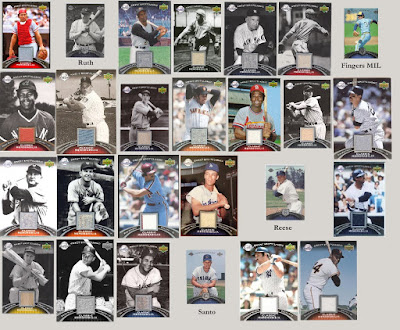 I subbed base card pictures for the few that I've never actually seen available.

4. 2012 Gypsy Queen black minis.  Status: In progress
Started these just 'cause they look cool, but I figured from day one that this would be a "lifelong" build.  Usually I trade away all the minis from GQ or Ginter, but these I decided to go for. 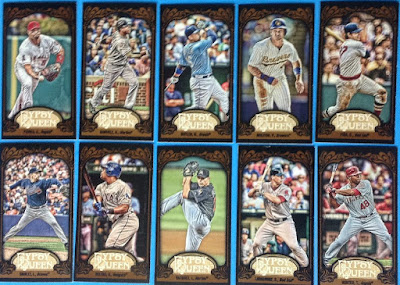