As I mentioned before, I spent the last week in Michigan visiting my friend who goes by BseballCommish75 on SCF.

Here are the fruits of our labor for the entire week: 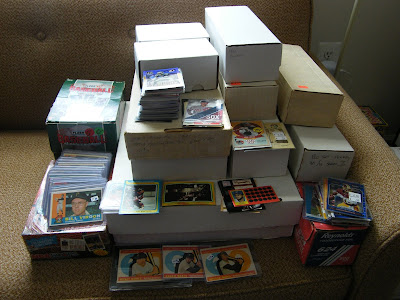 Now, some of the bulk seen here was given to me by the Commish himself.  You have seen images of the volume of cards in my collection.  Let's just say the Commish's hoard dwarfs mine....

As soon as I arrived, he bestowed some complete sets or starters on me.  The biggest one was a box of Allen & Ginter that he picked up cheap at a local shop that I'll mention later.  It has starters for at least three different A&G sets and singles from a couple more.  I have only completed 2009, 2014, and 2016 Ginter, so these are mostly new to me.   When I sort them out, you'll hear about any dupes that are available. 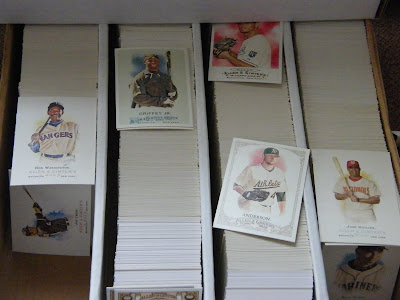 The other set he had extra was a 1990 Bowman.  I don't do Bowman as a rule, but the older sets (that came before they made the brand into the unknown prospect product that it is today) aren't so bad.  At least you don't have to worry about translating the card numbers (BDPP, etc.)  I also got a starter of Select football from the early 90's, and Pro Line Profiles from the same era.  Wants for those two will appear on my want list site soon.

I also finally got my 2016 Heritage set from the remaining cards of the case that the Commish broke.  Now I can add the shortprints to my wants site along side the other four or five Heritage years I'm already looking for.

The first shop we officially hit was a small place around the area of Midland.  The shop was mostly coins, but had a small shelf of 90's wax boxes.  We have sort of a tradition that when I go visit, we build a junk wax era set that I don't have.  (And that's most of them).  This time I had been looking at 1992 Fleer in my trade boxes.  That shop had two boxes marked down to five bucks apiece.  Perfect!

We opened them a day later and I made a number grid and crossed off each card I needed and put the dupes in the other box.  Then we went to the closest shop to Commish's place - Cards on the Corner in Lansing. 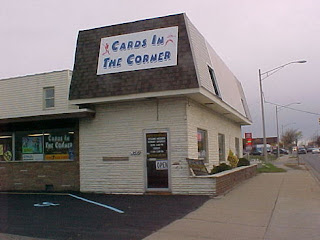 This store is primarily geared to Magic and Yu-gi-oh cards, as a lot of shops are.  But owner Eric has a decent selection of packs, boxes, supplies, and bulk singles.  He sells boxes mostly by multiplying the pack price, but will take some off for the whole box.  You can also fill a 300 count box from the bulk singles contained in a back room with approximately 200 monster boxes to pick from.  That's how we completed the rest of the '92 Fleer.  Later I picked up some more of the Clemens highlights and black bordered All-Star cards. 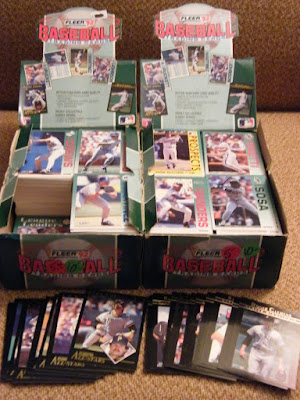 This is the same shop where we spent two whole days squinting at the backs of Pro Set football cards when I first started chasing all the variations.  This trip, I got a huge box of the first year of Pro Set hockey from Commish, and then supplemented it with an 800 count box of it from Cards on the Corner.  That is also on the sorting list for the coming weeks.