I Am Now A Scanning Machine

I recently upgraded my ability to contribute images to the Trading Card Database as well as this blog and any other endeavors that use images of trading cards.

Before, the normal method was a flatbed scanner, which in my case is the top half of my Canon inkjet printer.  Up to about nine cards would be loaded onto the scanner surface face down, covered with a piece of foam to darken the background, and then the lid is set on top. 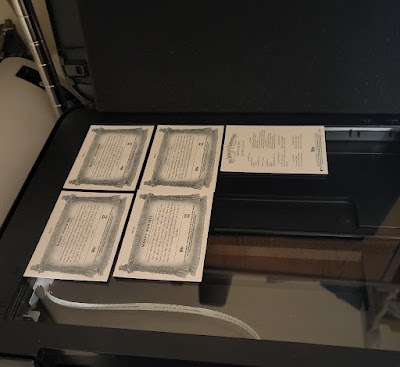 Then I use my Paint Shop Pro program from 1996.  Hit one button and it quickly sweeps the scanner bed and gives you a preview of what you've got set down.  Hopefully they stay aligned to the edges of the bed.  Then the scan area is designated, the picture mode selected, and the Scan button clicked.  A minute or two goes by while you wait for the scan to complete...bzzzzzzzzzzzzzzzzzzzzzzzzz... 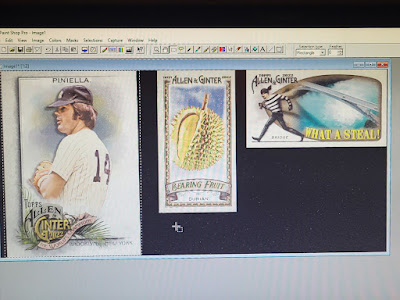 Now you get the group image.  Each card you want to separate must be cut or copied and pasted into a new image file and cropped down, resized, and tweaked. Quite often even when they don't move, the images are just so slightly rotated (shown by red area in picture) that it's only correctable by overcropping the image.  The Database is a bit picky that you don't leave any space around the edges. 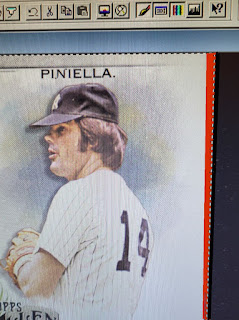 So I've contributed a decent number of images to TCDB, but it's not an efficient operation.  Until now.

I have seen several videos about Fujitsu scanners and their use for trading cards. Now I don't sell singles on any sites that I need to scan, so I don't upload to services like shown in these clips, but it works for manually putting images on the Database too.

I got the Fujitsu fi7030 scanner.  They retail brand new for around $550.  I was hoping to find one for much less on a Black Friday deal.  No dice.  Then I realized that this model has been around a while, so there should be some on eBay!  From a quick Google search (initially from any store), I found one on there for just over $300.  But a lot of the cheap ones are missing the feeder tray and/or the AC power adapter - and that's a deal breaker.  I found one that was complete and tested by the store that was selling it - for just over $275 - but with a Best Offer option.  They accepted my $250 offer!  So I basically got one for half price! They're about the size of an average fax machine if you're old enough to relate to that. 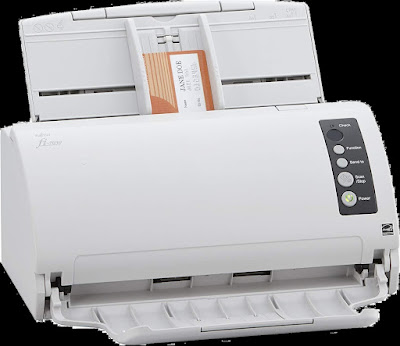 You simply call the program up to scan and load some cards in the feeder.  Set off the process by clicking the button on the configuration that you set up initially. Pardon my quick & dirty phone videos...
The scanner starts feeding cards and is done in mere seconds.

The images of both front and back are captured for each card as it passes through the machine.  Sometimes it flips them around, but that's correctable with a couple clicks.

Then you "release" that batch of scans into the folder you designated, and voilà!  Your images are there.  For the most part, they are cropped right down to the edges.  (I have my scan area set to exactly 2½ by 3½ inches, so there's little margin left.)

You can now go to the database or wherever you need the images and upload them into place.  The whole process takes less time than the first page of flatbed scanning typically would!  Plus, you can add batches to the ones you just scanned and get hundreds of images in just a few minutes!  Unfortunately, this model only really does regular base cards.  I tried a thicker jersey card and it wouldn't make it through the feeder.  I did confirm with a few junk cards that it doesn't leave marks on cards from the feeder rollers or anything.  I might be able to set it to mini size scanning in order to do those. They'd just have to be done separately.  The bulk of what I need to do is regular stuff anyway.

Watch out database!  Here I come!  I bet Database champions like Billy K have something like this...