While on the MD/PA shop and show tour, I came across a product I had never seen before.  My buddy Stuart had a want list for an obscure football product that we found in a couple places.  He only needed like a dozen cards to finish the 200 card set, but the boxes were cheap enough that it wasn't ridiculous to get a whole box (or two) to try to finish it.

1992 Ultimate World League Of American Football cards came in a box of 12 packs of nine cards each.  One hologram sticker and one mini-poster were included per box.  I think they lied about the "mini-poster", because I never saw one, and there aren't any listed in the TCDB. 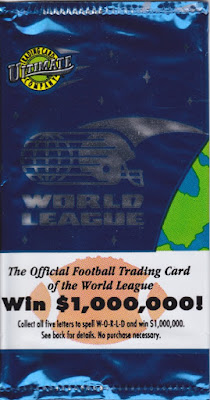 We found two boxes in an antique mall, and two more in Baltimore at a flea market dealer's table.  They were all around $4 each.  The boxes themselves are interestingly designed.

They would hold about 600 cards when completely empty, but since the set is only about a third of that, and you only get just over 100 cards per box, there are these platform inserts that look like the top flaps of the box (those are torn off this one).

The smaller of the two platforms has directions on it to remove it and store your set in the empty space. 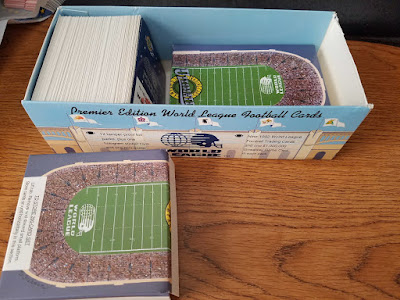 While that makes a decent barrier, I went another direction....

Left both platforms in and split the cards on top.  Used foam to fill the empty space, but it blocks the stadium picture, so I may figure out something else.  Always like to try to use packaging like this if possible.

Anyway, back to the cards themselves.

Fronts are reminiscent of Pacific designs around the same era.  Between the design, fonts, and neon uniform colors, these also remind me of baseball Senior league cards from a couple years before.

The backs are very first-couple-Upper-Deck-sets like with the second photos.  Certain other cards have TV Schedules or checklists.  The set is grouped by team, like 80's Fleer.  The numbers are very finely printed in light grey boxes and can be hard to read, especially distinguishing 3's and 5's. 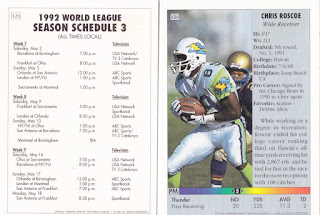 At the end of the set, there are a nice group of cards that explain elements of the game, presumably to the European audience that wasn't as up on the rules and positions.  They flipped the back on one of them.  Don't think it's a variation.  I like the look of these. 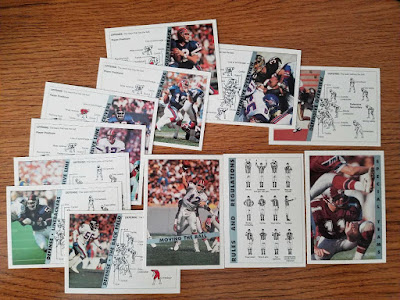 Those and the very last cards feature pictures of the NFL "spokesmen" for the league: Lawrence Taylor and Jim Kelly.  Cards #193 thru 200 tell you "How To Collect".  It's always entertaining when companies try to instruct collectors.  I'm missing one of the Kelly cards.

The backs break down different facets of the hobby.  From what are sets and wax packs, to what determines value and condition, and how to store and trade cards.  Of course, rookie cards were already the big thing, and they preached "the worth of a series will always increase corresponding to the rise in value of its rookie cards."  *Sigh*. 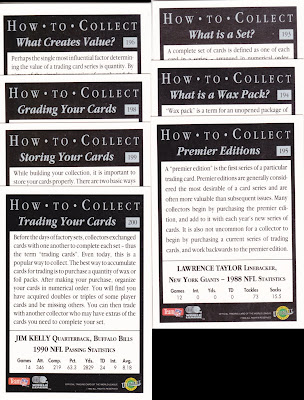 There is also one card that discusses "Premiere Editions", which says that the most desirable sets are the first ones, and that many collectors start with the current issue and work back to the premier set. They kinda made that one up.  They do pass along a few truths, too.  They say the best way to collect a set is to start with a big lot of singles or wax and trade your extras for those that are missing.

So to come full circle, Stuart needed like a dozen singles for his set.  We got four boxes.  A total of 432 cards and four holograms. 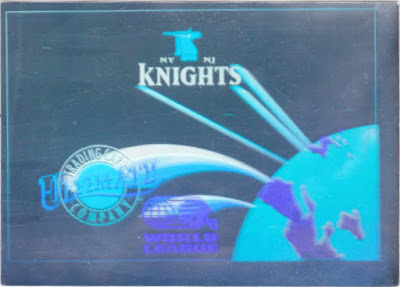 Out of all the duplicates, I started the set and need about 55 cards.  FOUR boxes yielded only 3/4 of the 200 card set.

Topps, Upper Deck, Panini, Donruss, and Fleer can feel somewhat vindicated.  Heck even Pacific, Playoff, and Score can look down on Ultimate for the Worst Collated boxes in the history of cardboard manufacturing.

It's a nice set about a limited subject.  But it shouldn't be this hard to finish.  There are no SP's listed in the database, though with an oddball company, they just may not know.  I figure they may have lost their shirts on this product but still had to pay out the $1,000,000 contest prize from the one-per-pack scratch-offs. 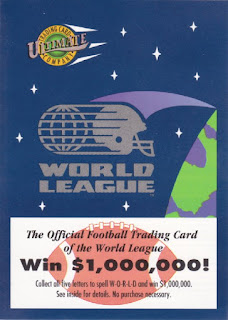 So if you've got some of these lying around, or if these pique your interest, get some, sort 'em out and check the extras against my wants site.   Hopefully you got the "opposite" boxes that we did and we can all complete some sets!
Posted by GCA at 8:00 AM
Labels: box break, commentary, duplicates, junk wax, oddballs, ripping wax