Back to my haul from the 2019 National in Chicago.  All these are from Thursday, the first full day of shopping. 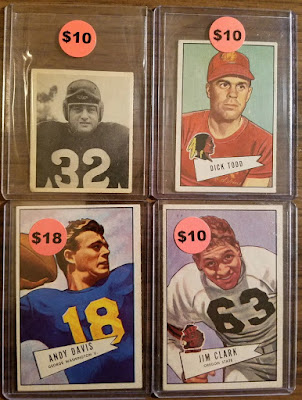 Believe it or not, these are all Redskins cards.  I finally had my detailed list of '52 Bowman large and small needs while I was looking at them and found a few of the college guys from the set that were draft picks by Washington.  I've probably seen them before but without my list I wasn't conscious that I needed them.  Always nice to add to the first ever team set of '48 Bowmans too.  I'm pretty sure these were heavily discounted off the sticker price. 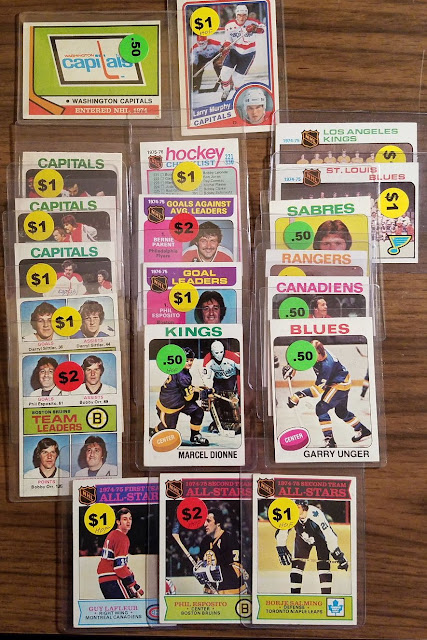 Same vendor had some nice vintage hockey at 50% off sticker price.  The top two are Caps team needs, and then I whittled my '75-'76 Topps set down some more.  I keep having to look up what year these are - I just don't know the hockey sets nearly as well as baseball or football. 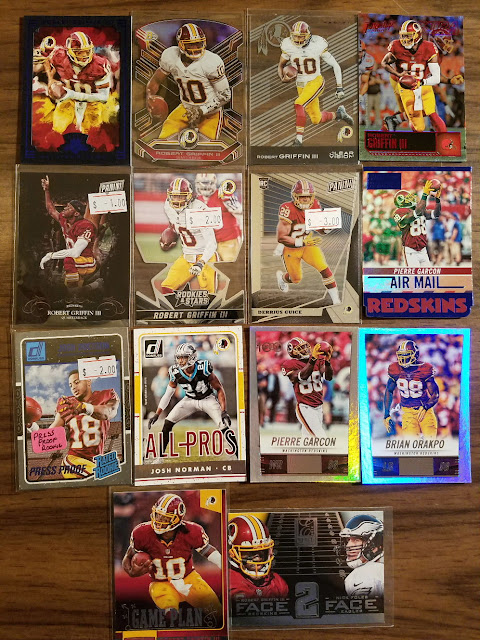 This is probably a combination of a couple vendors.  Various shiny and colorful Redskins.  Most were a quarter or 50¢.  Nice to see Guice is back in action this past week in preseason game 3. 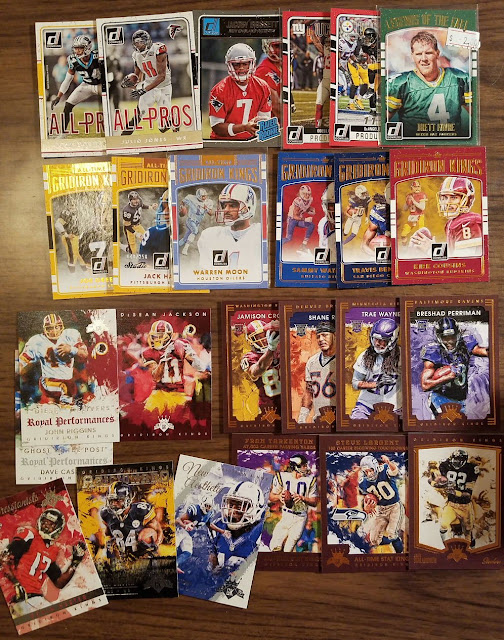 Also from those vendor(s), 2016 Donruss and 2015 Gridiron Kings endless set builds.  Got two Josh Normans on purpose, but most of the other 'Skins are for the sets.  Again, the bronze bordered GK's are just base cards.  They are pretty though.  There are so many inserts in both these sets, it's just taking forever.  Nice to find them cheap this time.  I was later recommended to bust some 2019 Donruss, but can't pull the trigger unless I can knock something from past years off my lists first. 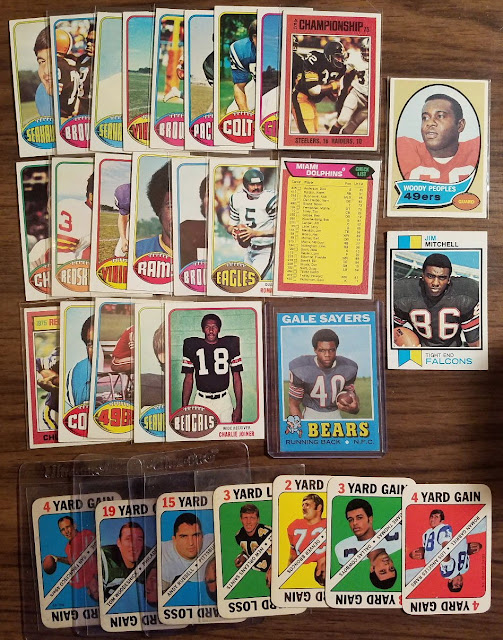 Back around to vintage football.  Still looking for the last few for about four different sets at once.  1970 Topps is down to five, the game cards are about 70% finished, and '72 Topps is down to six, excluding the impossible high numbers, as well as '74 (not shown).  1976 is just over ten away. 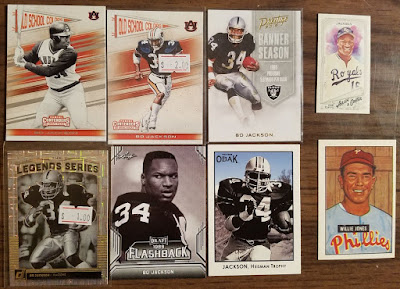 Some Bo's from recent years that didn't look familiar, and a Willie Jones reprint that Stuart found. 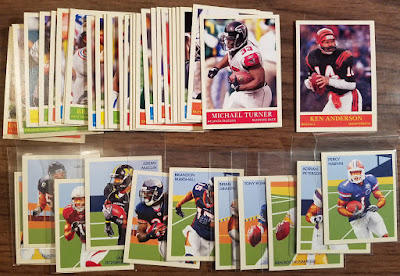 Then I found a vendor I had bought from at a couple previous Nationals.  Don't know him by name, but found out that he only does Nationals.  He's always good for hard to find inserts at fair prices.  This year, he had a great selection of other stuff I almost never see in these 2009 UD Philadelphia minis.  Shown here with one veteran short print and most of my second base set needs, these are rookie players from that year.  They resemble Topps Magic, but are by Upper Deck. 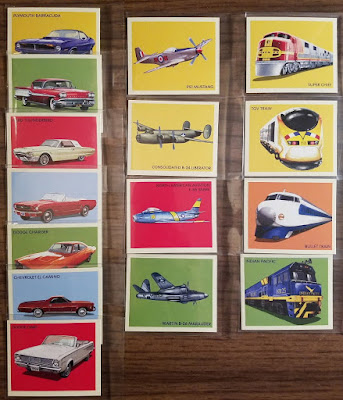 But the minis also have a retro theme and feature cars, planes and trains!  I know Billy Kingsley would like these...especially at 50¢ a shot. 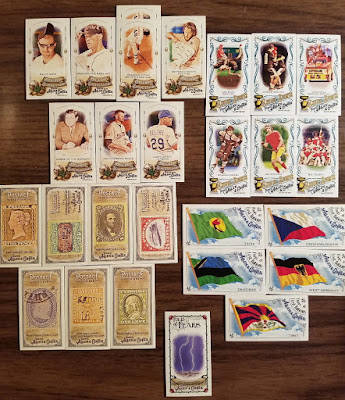 Was also able to load up on 2018 Ginter mini inserts.  Had a chance to round out a lot of these from the seller with the cheap football, but they pulled the Beckett out and when they couldn't find some of the retail ones in there, they wouldn't sell them to me.  And I overpaid on some of the regular ones (including the duplicate).   The others from the insert vendor were in snap boxes among several different products all sorted out - Goodwins, Ginter, Gypsy Queen, and even rarer stuff... 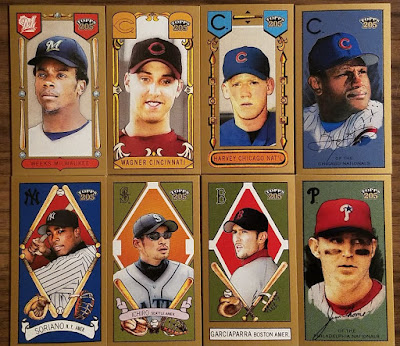 Killed my last few T205 Topps minis with these. 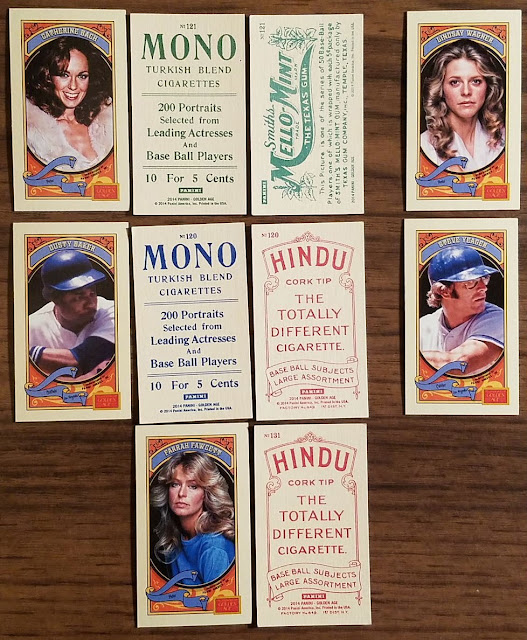 And then went for some player (and babe) collection minis when I found a box of each back style from Golden Age.  The Mellos are the scarcest.  Three Catherine Bachs, three Dusty's and two Farrah's show most of the design variations.  Threw in Lindsay Wagner just to round out the pretty ladies. 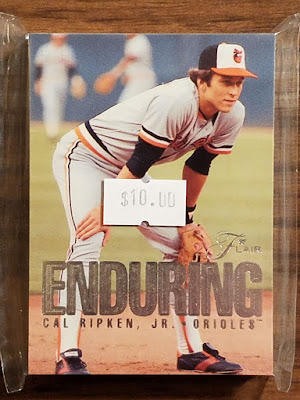 Same vendor had complete insert sets for very reasonable prices.  I keep adding to my Ripken tribute binder with stuff like this.  Cool to find them in one shot. 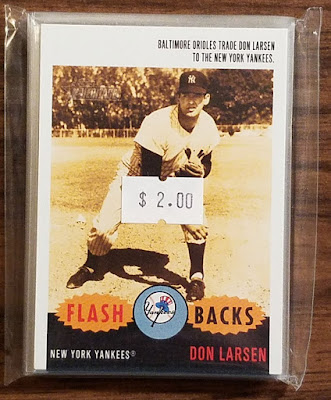 Also got a few Heritage insert sets.  I find starter lots of the base sets, but rarely get inserts with them.  This helps to jump start some of them, including this 2003 baseball flashbacks set.

Got three from 2007.  Won't take nearly as long to knock out the master set on these now. 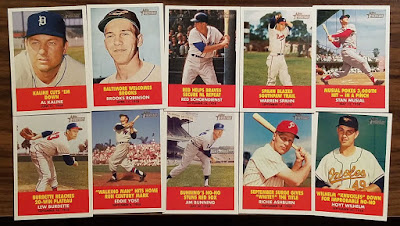