Several bloggers have put out short posts on the parallels between Topps Heritage and the original sets the product is based on.  (Or "is a tribute to" as Topps has said).  Bo at Baseball Cards Come To Life put up a decent batch of 1960/2009 pairings just recently.  Since I have both sets complete, I chose the 1959/2008 set comparison.  Having the cards hasn't really been that helpful though, I largely relied on the database listings and a spreadsheet where I laid out both sets side by side.
As I went through the lists, I noted the matching pairs, and also the significant stars or cards that were paired in mediocre combinations, or worse - not at all.  Since the sets are so large, I will break this up into multiple posts.
I posted previously that Heritage started off with Vlad Guerrero instead of matching the Commissioner's card from 1959.  No offense to Vladdy, but that was a big gaffe right off the bat. 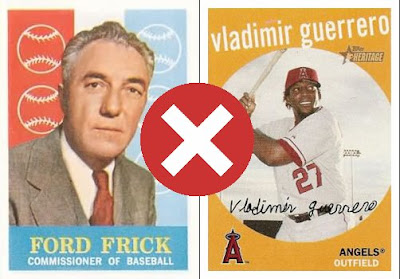 For the most part, all the team cards match up.  Of course, Heritage has a lot of teams that didn't exist in 1959, and those are loaded at the end of the set, which exceeds the original by 148 cards.  So in order, the Phillies, Orioles, Giants (just in time to be SF), White Sox, Reds, A's (KC vs. Oakland), Cardinals, Red Sox, Cubs, Tigers, Senators/Nationals, Braves, Dodgers, and Indians all appear at the same number.  But for some reason, there was no Pirates or Yankees team cards in Heritage.  Anybody know why that is? 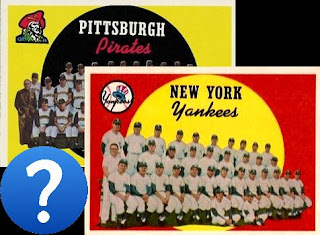 Back to the regular players, the first nice matchup is arguably the most desirable card in the '59 set. 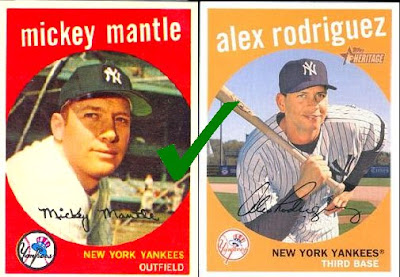 Yankees' biggest slugger on both sides of #10.  Yep, that's how ya do it.  Now, A-Rod is no idol like Mantle was, but no one will ever match up that completely.   The criteria for a good match is simple - players share some characteristic: slugger, ace pitcher, or at least the same position, and for the same team.  There's a chance there may be something different, like a common nickname or something, but it doesn't happen often.

And right in line, the first multiplayer card at #17.  These generally line up too.  The '59 teams may not match the star power of the '08 teams or vice versa, but for the most part, Topps made it work.  There are a couple new combos for teams exclusive to '08, and that's fine.   There's only like one that doesn't match very late in the set. 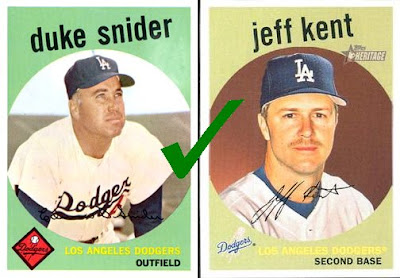 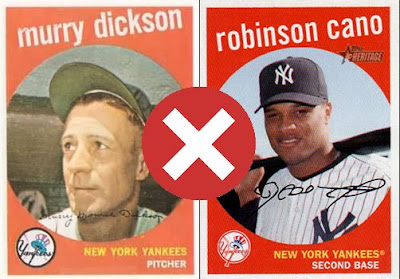 I had this one as an "in between" in that the #23's are both Yankees, but I changed it.  This is the first miss with a regular player matchup.  At least it's obvious to me.  Cano should have been matched with... 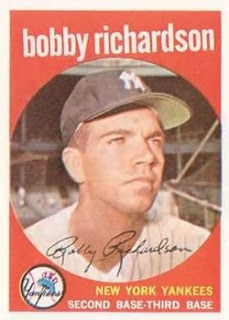 Bobby Richardson was paired with Carlos Delgado of the Mets at #76.  Really? 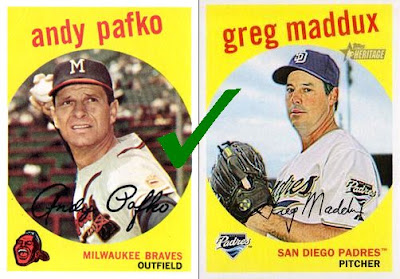 The twin 27's are gonna look a bit weird at first, but you'll get where I'm coming from.  Pafko and Maddux match up because they both started with the Cubs and were stars on the Braves.  Spahn gets paired with a 2008 Brave just down the line, so it all works out. 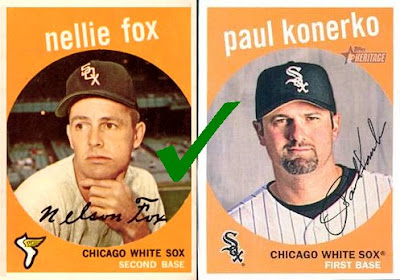 #34 - Tigers hitters.  Yup.  But what's up with the super compressed monochrome fonts, Heritage? 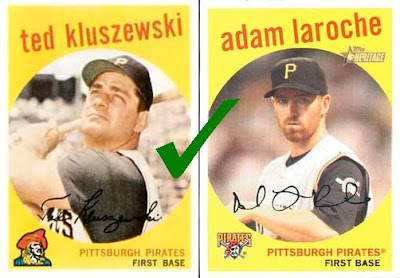 And then back to back at #35 Bucco First Basemen - Check.  Even the same uniforms with the vests.  Nice. 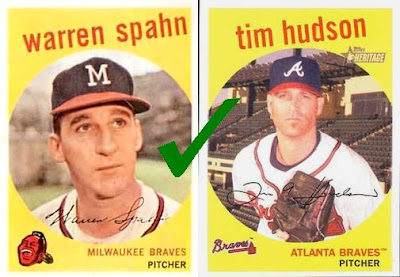 Again, Legend vs. star pitcher for same team at #40.  Good enough.   Especially since Maddux was gone and Smoltz was paired elsewhere. 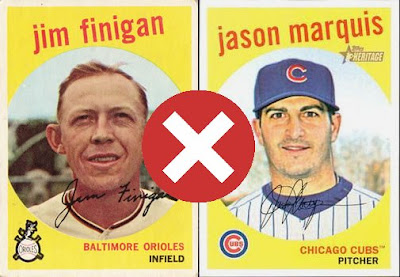 These two #47's are close as far as the picture goes, but it could have been closer. 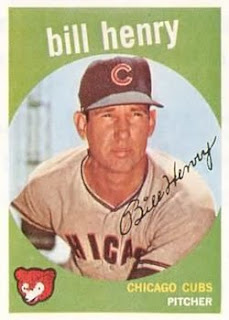 Bill Henry is #46, and he had also just come to the Cubs the previous year after being somewhere else for a few years. 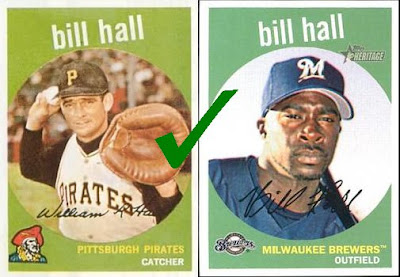 Now #49 is fantastic.  Not much in common as players, but the same exact name?  Awesome. Not the same team, but how can you disagree with this duo?  #50 is a good place to pause until next time...
Posted by GCA at 12:14 AM
Labels: favorite sets, Heritage pairs