Bigger Can Be Better

Finally got my motivation, mind, and scanner going all at the same time, so here are some interesting cards I got recently.  The majority of these are for player collections.

Picked up this batch from Cardfinders on eBay.  He's got tons of the online exclusives and 5x7 versions of regular Topps parallels and inserts.  Check him out.  This was the second round of purchases I made from him.  Actually messed up and have the 5x7 George Foster from the previous post coming separately since it was an offer auction and wasn't accepted until I had already paid for the others. 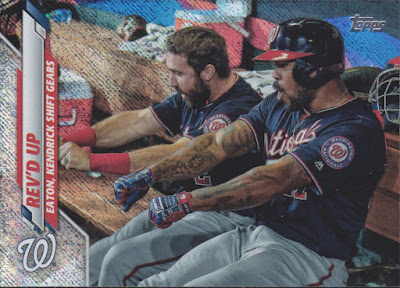 This is the card that kicked off the shopping spree.  I'm trying to collect the entire rainbow of this one.  The one I got this time was the sparkly foilboard retail version serial numbered to 264.  That makes eight, including the regular base card.  Only twelve more parallels to go! 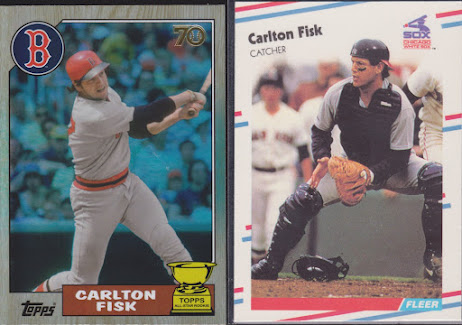 Two Carlton Fisk cards that are more special than the scans reveal.  The left one is the most recent rehash of the '87 design, but this one is the 2021 Topps All-Star Rookie Cup rainbow foil parallel.  There are several old designs resurrected again for these, but the images are incomplete, so it's tough to tell how many players drew the wooden border design and what the others were.
The other card is the glossy Tiffany version of 1988 Fleer, by far the oldest card I got. 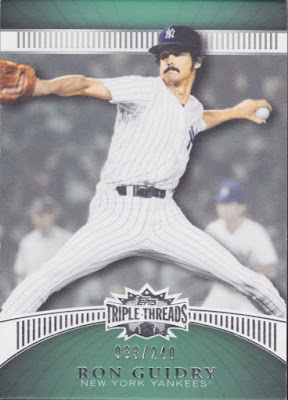 Kind of a throw-in, this green version of Topps Triple Threads Ron Guidry serial'ed out of 249.  It's from 2010. (I had to go back and look, I don't know these on sight at all.(  I only pick up these kind of cards when they're really cheap.  They're so thick they usually distort the plastic page pockets. 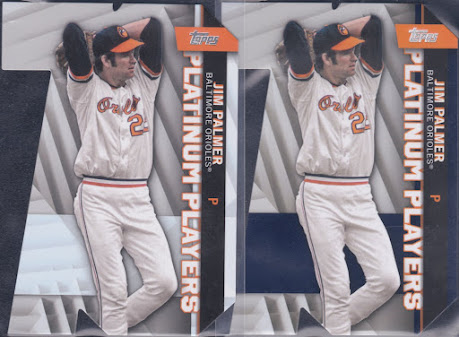 A pair of Palmer Platinum Players - plain and parallel - pending placement into plastic page pockets.  The left one is the regular and the right one is the blue flavor.  They were actually swapped in the auction listings, which threw me until just now. 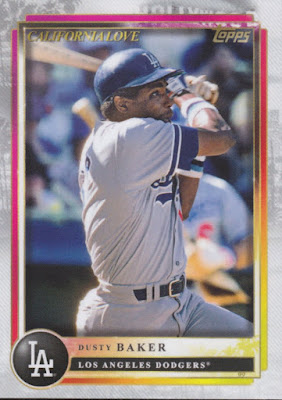 I knew nothing of this one until I saw it for sale there.  It's Dusty Baker's card #66 from 2022 Topps X Aaron Judge set.  That's the newest card in this group.  I guess Topps doesn't pay anyone to come up with catchy names for these player-inspired sets, they just call them all "X" and run with it.  Creativity costs extra.  But it's a cool card all around otherwise. 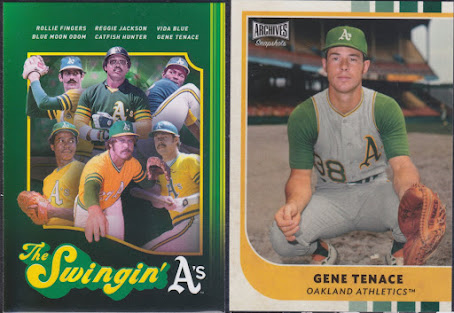 Fuji is gonna like the next few even more than most of you.  They're from two different Topps Archives sets this past year (there are four total - the other two are Active/Retired autograph sets).  The Swingin A's is one of the Movie Poster cards that also exist as actual mini posters.
The other is the Archive Snapshots base card of Gene Tenace who appears in both (and my player binder).  I will probably get another of the A's card since it would also fit in my Vida Blue section. 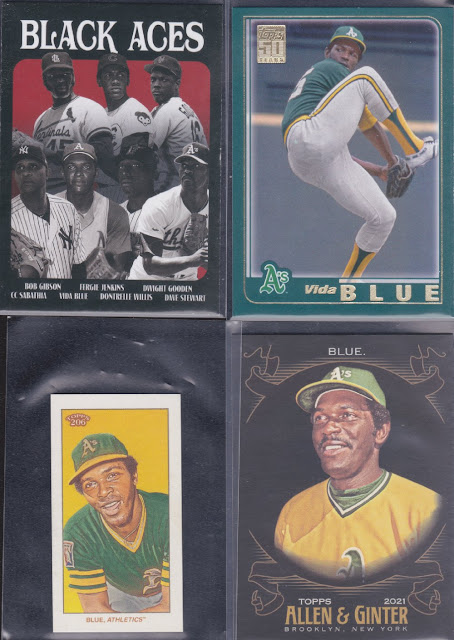 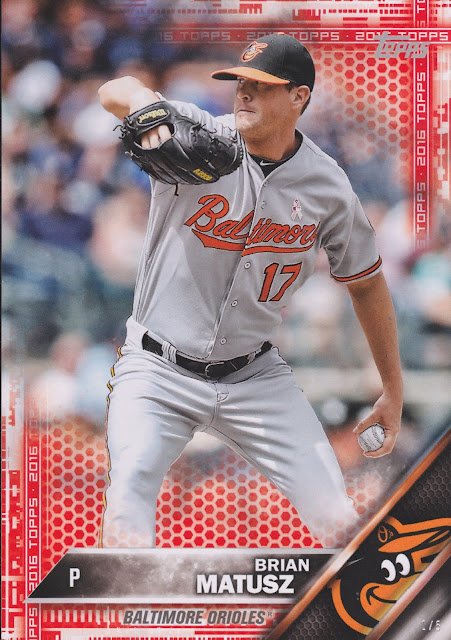 Now we get to the big boys.  The rest of what I'll show next are all 5 x 7 online versions of recent Topps cards.  This one is the rarest and also from 2016.  Serial numbered 1 / 5 in the lower right corner.  Would have been nicer as orange, but I suppose red goes with many more of the other teams.

I'll be looking for all the other colors of Matusz.  I'm basically super-collecting him.  Here's a visual reference with some regular cards on the scanner. 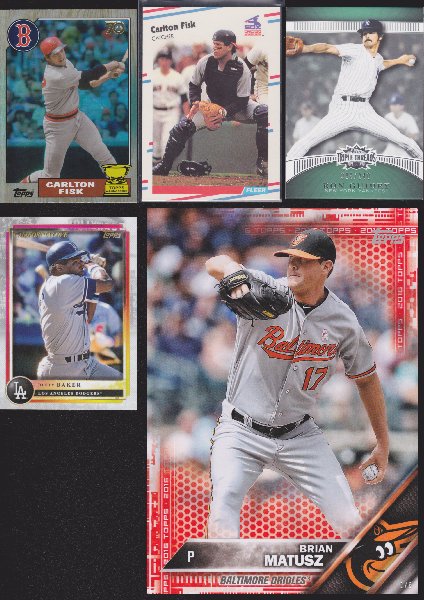 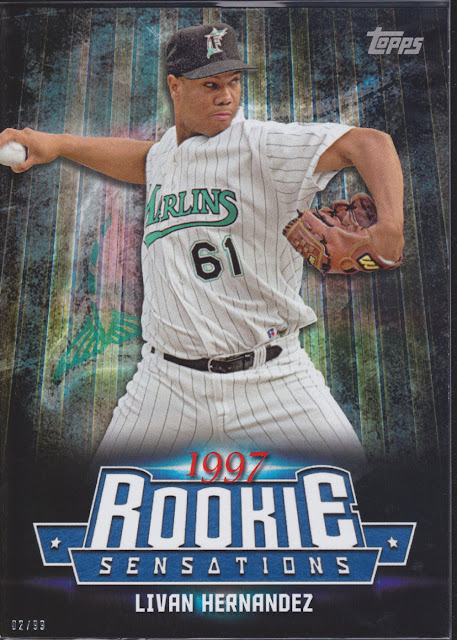 Figured I'd get at least one 5x7 of each of my player guys.  Many of whom have several to choose from.  This was the best looking Livan, and it's only numbered to 99.  From 2015. 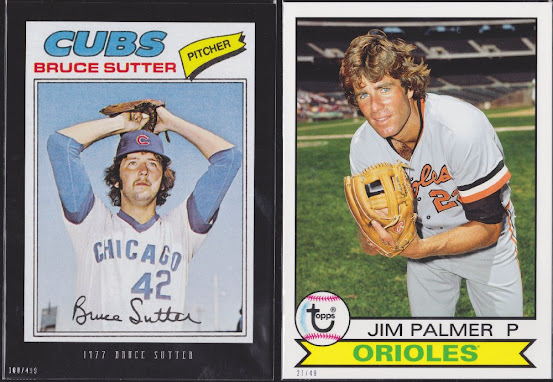 I only have a couple Hall Of Famers in my PC ranks, and these are two of them.  Sutter's "Anthology" is numbered out of 499, while the '79 flavored Palmer is out of a tenth of that.  Believe it or not, both of these series are from way back in 2016.  The Anthology series is all rookie cards numbered by their original card numbers, while the Palmer is a parallel of the 2016 Archives regular set.  Makes sense that a rookie product would be made in ten times the quantity of a retired veteran set.  (Much to my chagrin, really).

How many of these oddballs (sorry John Mangini - he hates that term.) had you seen before (or own?)  Let me know in the comments.