At the risk of appearing to be the old man shouting "Get off my lawn!" to the new crop of hobby influencers and investors that have come to the forefront in recent years, I just have a few concerns or complaints.

First, I would say that there's room for all of us in the arena, but certain practices or extremes are detrimental to the hobby.  While ideally, I would like to see it all return to a pre-COVID state, it's not likely to do so.  But if we can all pursue our goals without infringing on someone else's then we can peacefully

The fact that there are a lot of people that are viewing sports cards as an investment doesn't bother me, there can be some truth to it.  This is America, and if you want to make a few bucks selling cards at reasonable prices, then go for it.  Regular dealers have been doing it for years.  You just have to follow some basic good business practices. 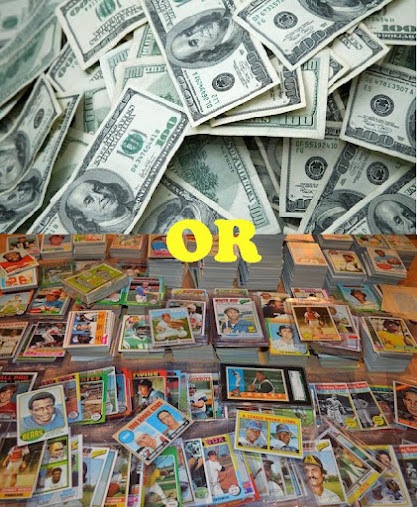 Any card is only worth what someone is willing to pay for it.  The problem today is, somehow there are allegedly a lot of people who appear to be willing to pay 200 to several thousand percent over the numbers from a couple years ago.  I am not one of them.  I am familiar with the going rates on singles, star cards, retail packages and wax boxes from before COVID, and I don't see any reason to pay much more than that.  A retail blaster was $20.  Now they are three times that and up just because of the remote possibility of pulling a big card that has been inflated in value because of extreme overbidding or manipulation by elitists or corporations or whatever is causing serial numbered rookie cards to be priced like exotic automobiles.  If you're buying retail packages and selling them for close to the sticker price, then good for you.  If you're marking them up to double or more, then you're part of the problem.  You are depriving others access to cards by either wiping out the supply in the area or pricing collectors out of the market.

The card companies have been hyping rookies since the 80's.  Now they have help from the "influencers".  A lot of their content is about when to sell and what's hot and what's tanking in value.  It's almost always about the money.  Now like I said, there's nothing wrong with a little entrepreneurship, but to me that's sort of a shallow reason to be involved in the hobby.  Unless you are a fan of some player or team and have a personal collection that you either fund from your sales or keep from collections that you supply your business with, you have no more attachment to the product than someone investing in coal futures or pork bellies.  It's not that I think investing is "evil" per se, but it's kinda less...authentic maybe?

Now all the high dollar rookie cards I need to finish sets are priced out of reach.  Why?  Because a bunch of rich guys thought it would be fun to drive up prices?  Because there are all these new people that believe the hype?  I don't know.  But I'd rather do without then pay four digits or more for a Jim Brown or Alex Ovechkin that used to be a few hundred bucks.  I won't participate in this "new market".  I'll just look for other things instead.

But with all the hype around rookies, what is the future going to bring?  Will there even be base cards in the new sets by Fanatics?  Will there even be physical cards for that matter?  Maybe it's the end of a lot of the things I collect.  The product of this new era may turn out to be a finite limit on cards I want.  That's fine with me.  There are plenty of vintage sets, oddballs, junk wax, etc. that I can still seek out.  Will just have to ignore the big rookies in them all.  I'll be at the dime and dollar boxes....see you there?

Posted by GCA at 2:36 PM
Labels: Believe the Hype, commentary, Resistance Is Futile