Even though I've read nothing but lukewarm reviews of Topps Series 3 for 2017, I went ahead and ordered two regular hobby boxes.  I've heard a couple collectors have finished their sets with only one box, but I'm not sure if that was a Jumbo or a Regular.  We'll see.

First off, I'll get right to the part you guys like - the trade bait.  Got an All-Star jersey of McCullers, who I took note of in his last couple postseason appearances.  I had a feeling I'd hear his name for something significant again.  Hopefully, a Game 7 win.  (Sorry Night Owl, gotta let the new guys win.) 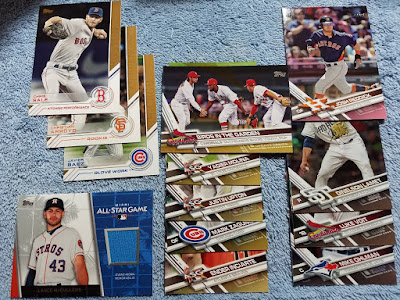 Also got a pink parallel Reddick, and the usual amount of gold and foil parallels.  Some blogger favorite teams and players in there.  The Salute inserts are available too. 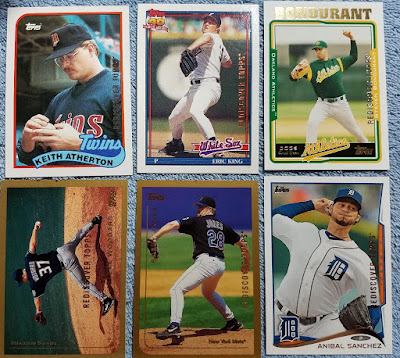 Here too, are my buybacks.  Nothing major here.  Contents of both the above pics are available.

Keep in mind, I'll probably have another set of these two pics after I rip the second box.  I had half a mind to sort what I got in the first box and leave it at that, returning the second box as unnecessary.  But since the hit I pulled doesn't have any weight with me, I can't send the other box back without knowing that I wouldn't have pulled something incredible.  If I keep it, I'll get something OK, but probably not awesome (though from this vendor I actually have pulled a few Machados, etc.) but if I send it back, it would have a 1/1 super case hit inside, I'm sure.


After I opened the whole box, I sorted them into stacks of regular players (who have allegedly moved teams recently), rookies, All-Stars, and other team and event cards.  I separated the inserts, and then sifted through each pile to remove doubles.  Only got a few dupes, so at least that's nice.

So here's what I found.  There were a lot more "moving" players than I originally thought.  Now I didn't go so far as to print out the list of every player that was involved in a trade or free agent transaction during the 2017 season, but that wouldn't have been beyond my scope.  What I relied on instead, was the notation on the back of each card that I can barely see, but it's easy enough to read the last numbers.  So I sorted out the players whose transactions occurred in 2016 and 2017.  What we're after in Update is players who changed teams in 2017.  2016 moves should have been covered last year, right?

Well, apparently not.  Click on picture for better view:

The stack of 2017 players is smaller than the 2016s.  and those stacks are of course dwarfed by the stack of rookies, and rookies debuts (which are redundant and only exist because of the hype machine), and the additional few Rookie Combos.

Why so many?  Well you know by now.  It's the card company poilcy... 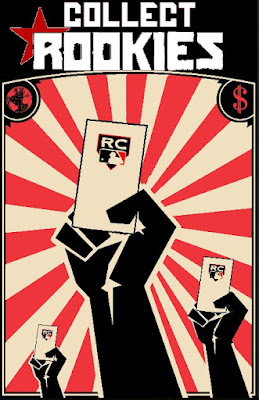 YOU MUST COLLECT ROOKIES!

But I digress.  I haven't counted the stacks, but just eyeballin' it, it seems that rookies (and their redundant counterparts and Debuts) account for almost three times the "updated" players from 2017.  With so many significant traded players missing, there are still at least twice as many rookies.

If I can figure out an effiicient way of researching it, I'm going to see if I can find out if this has been a trend over the last several years/sets, or if they really ramped it up for 2017.  Stay tuned for that and box #2.
Posted by GCA at 10:21 AM
Labels: commentary, propaganda, Resistance Is Futile, review, trade bait