Translated, that says "I love Russian hockey cards".  At least according to Google.

I've been aware of the existence of KHL cards (Kontinental Hockey League) for a while now, and knew that Sergei Fedorov was active there for a few years after he left the NHL.  I wanted some of those cards to add to my Fedorov collection, but I hadn't seen any on eBay for a while.  Checking recently, I found there was only a dealer in Canada with very few (and Canadian shipping), and another in Latvia, which I wouldn't think would be cheap.  Then I found a dealer in Pennsylvania - Scotso53 - that had some.  There weren't any Fedorovs that I wanted, but he did have my favorite newer Capital player - Evgeny Kuznetsov.  They were only $1.60 each on average, so I pulled the trigger.

These two are 2011-12 SeReal KHL.  I'm guessing you pronounce the company like the breakfast food.  I've watched a couple YouTube videos on learning the Russian language, (because I always thought it sounded cool in all those Tom Clancy movies) but I'm not fluent enough to be able to read any of it.  The blue(er) one notes that Kuzy is on Team Fedorov for the All-Star game.  He played for Traktor Chelyabinsk over there otherwise.

These are from the next year, 2012-13.  The first is a regular base card, and the other two are Hockey Kings (inserts) with silver foil on the banners.  I learned later that there are red and gold numbered parallels to these.  (Stay tuned for more on that later.) 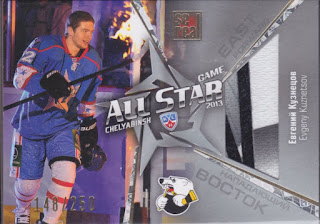 Picked up this All-Star jersey numbered to 250 with a cool patch for just over five bucks.  This is the highlight of this purchase.

2013-14 next, and the base cards are similar.  The second card is part of a team logo puzzle series, and the third is an Under the Flag insert. 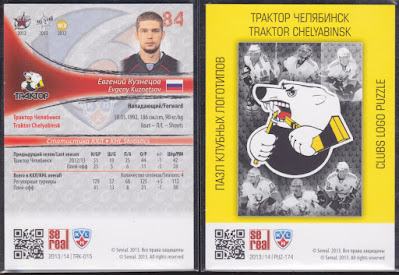 Here's what the backs of the first two look like.  Luckily there is a lot of English to go with the Russian text.  The base card notes his last couple All-Star appearances, and a World Championship for the national IIHF team I believe.

Also included in this Capitals star lot from other places, were these Braden Holtbys from the minors: 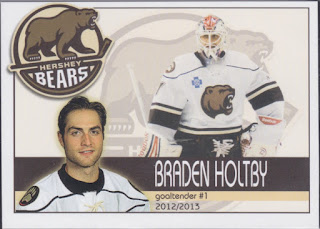 Three really thin stock cards from the Hershey Bears.  They play in Chocolate Town, which is about an hour from my house.  The last is an In The Game of him with Saskatoon.  I think Braden is still playing for Dallas now.  At least it's not the football team...

And finally, a young version of our favorite Capitals tough guy, Tom Wilson. 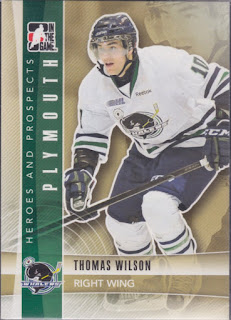 Oh Thomas, so many hits you hadn't delivered yet...

So that's it for this eBay order.  But there is a Chapter Two in the Russian collection saga.  (Actually, there's a Chapter Zero that includes the old Red Army cards that I have - beyond those Upper Decks that came out with the Sharks in the '90s.  I'll have to post those soon too.)  But what I'll say now is - turns out the Latvia dealer offered cheap shipping and had TONS more....