...which is Latvian for "We really like hockey cards too!" (again according to Google translate).

Like I mentioned, I went back to eBay and searched the Latvian seller (alaicans) for Kuznetsov and Sergei Fedorov.  Then I pretty much bought one of each that I didn't already have.  Surprisingly, the shipping was only $5 base and a quarter for each additional card.  And they threw in a whole bunch of bonus cards too!

Most KHL base sets have a couple parallels, so I'll try to group those together.  I scanned almost every card individually - front and back - since most of them weren't on the TCDB.  But to keep this post under six miles long, I won't show all that.

Fedorov and Kuzy were apparently in the KHL at the same time.  They both have cards in the 2010-11 sets and for the next few years after.  So let's start there... 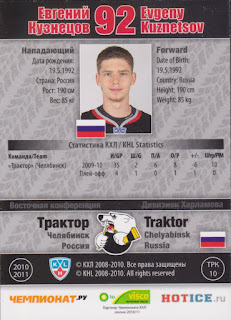 Here are the base cards from 2010-11 Russian KHL.  The silver and gold parallels can be distinguished by the logos in the top left and the text below the KHL league logo. 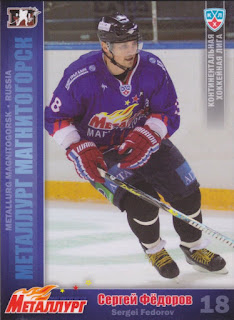 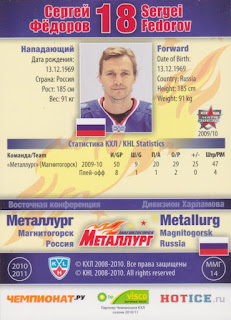 Fedorov's cards, front and back.  Colors are different since he's on Metallurg Magnitogorsk and Kuzy is on Traktor Chelyabinsk.  I also got the gold version of this one.

These are from the 2010-11 KHL Exclusive series inserts for the All-Star Game.  This is a separate product from the base set.  A lot of the base cards are relics. 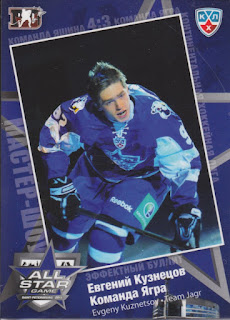 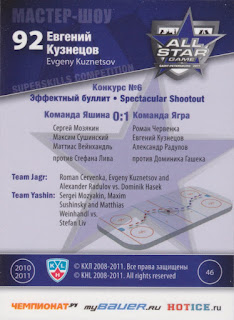 Kuzy also has this Super Skills All-star card.   Looks like he won the Shootout competition. 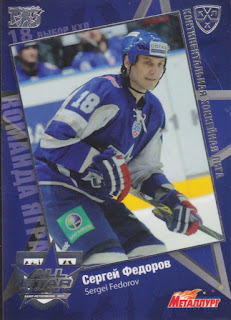 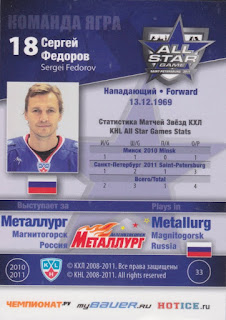 Front and back of the silver All-Star for Sergei.  Still missing the gold one of these. 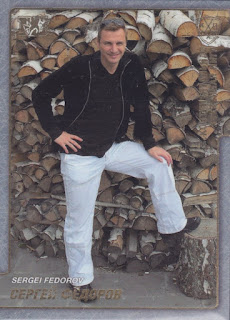 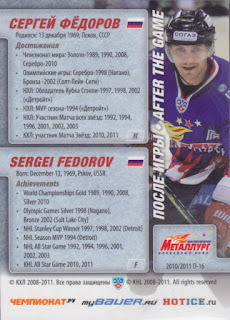 The other insert set in the Exclusive Series is After The Game.  Shots of players outside the rink.  Sergei has one of the 18 cards in this insert set.  Nice writeup of his accomplishments.

Their 2011-12 cards get a little more colorful and are now made (or branded) as SeReal.  (Again, I'm assuming that is pronounced like "cereal".)  Got all three versions of both. 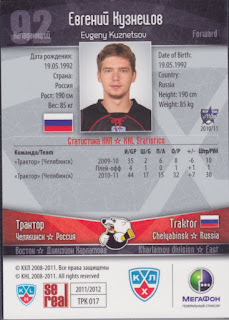 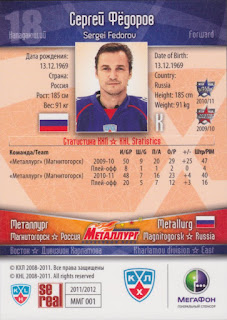 Here are the backs.  I'm glad they put the years next to the company logos since the copyright dates span five years.  And there's just enough english translations to understand all the stats and things.  The little badges next to the photos denote All-Star appearances, but aren't all-inclusive. 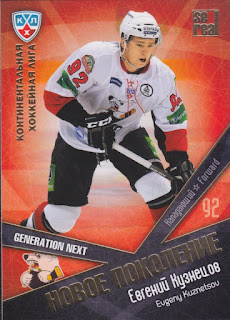 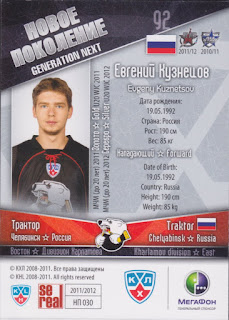 Kuznetsov has a Generation Next insert as well.  This is listed in the database as 2012 SeReal KHL All-Star Collection, which hides it from the listings of sets by year.  Those also include these two that I showed in my first post: 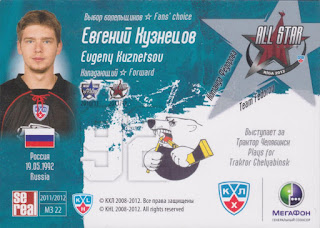 Think I'll stop here for now.  The next ones are 2012-13 and then some other miscellaneous stuff including stickers and a lot of other players.