My All Time Favorite Sets To Collect

Stole this idea from Night Owl in what would be a great Bat Around.  He kept his list limited to Topps flagship sets, though in more than just baseball.  Being primarily a set collector, my list is a lot more diverse than that.  Not knocking his choices at all - I said I'd probably include 1971 as well and maybe a couple of the others - but I got to 12 or so and there weren't any yet.

I made my list and then had to figure out what order they fall.  My analytical mind took over and I came up with a scoring system that breaks down some positive and negative aspects that influence the collectability of a set.

I gave points mostly on a 1 to 3 scale, where 1 is weak, 2 is decent and 3 is great or very true for that quality.  A couple other categories got either 1 or 0 for true or false.  Those included whether it's a retro design, or the design is used for other sports, or if there are variations or parallels that make the set harder to do.  I did use half points in some cases.  That made it so there weren't as many sets tied with the same score.

Here's the chart (without the set names) for all you stat nerds: 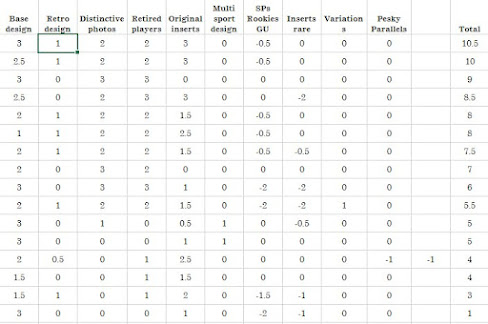 So with that out of the way, let's get into the countdown.  I'm starting at the bottom. 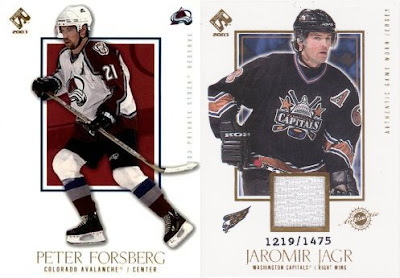 One of the most elegant designs ever, this set kills itself in the rankings because of the inclusion of game-used jerseys as part of the base set.  And there are the typical batch of shortprinted rookies at the end, which I generally disregard, but have been seeing here and there for cheap.  There are a couple sets of inserts, but they're also kinda rare and are secondary to the base cards as far as I'm concerned.  I'm down to a few of the jersey cards, but finishing this whole thing is still gonna take a long time. 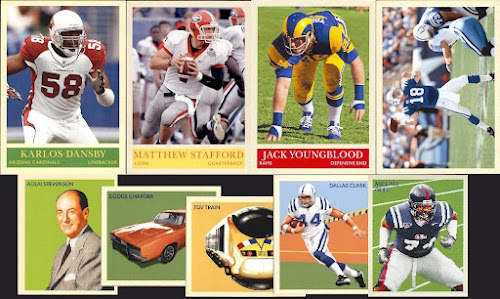 Love the old Philly football designs from the 60's, and this modern version honors them well.  The base cards are pretty basic, but clean.  This set is all over the place with inserts - Obama, Vietnam War, etc. and the minis with government figures, cars, planes, and players.  I scored a bunch of those minis at the National a couple years ago, otherwise, I might not mess with them.  I'm skipping the other inserts.  But there are short print RCs, veterans, and action shots that complete the base set and come few and far between.

One of the few hockey sets that I'm completely done with, it just holds a special place for me.  The design is not super fancy, but just works, and the set is really how most sets oughta be, even though there was an Update series etc.  It really wasn't too hard to finish.  Biggest thing was the sheer volume of base cards.  The inserts were small.  There were rookies, but they weren't short printed.  Just a very collectable set. 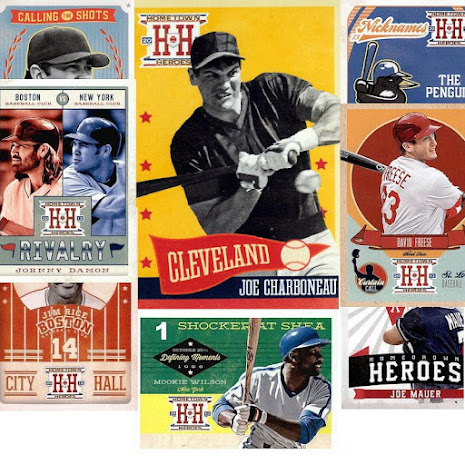 The one "no-logos" set that still makes the list.  (Though I did take off one point for that in a special category).  The checklist is cool in that there aren't just the HOF'ers or current stars, but a lot of fan favorite type guys.  The inserts are especially great too, even with the lack of insignias.  The problem with them is the parallel inserts that basically tease you and deny you a real insert.  I've got a whole handful of those (to trade).  If Panini would have kept up with this product and maybe Golden Age and America's Pastime, they'd be more popular than with just the recycled Donruss stuff they keep putting out. 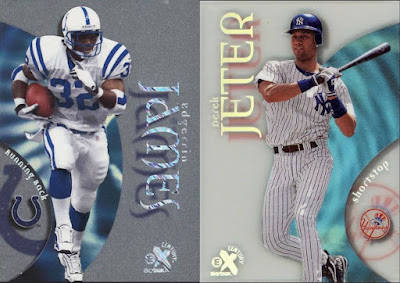 The multi-sport sets occur back-to-back here, but I'm only working on the football version of this one.  These beauties are the first in a line of acetate sets that appear until 2004 in some degree of transparency under either Skybox or Fleer.  (They're tough to search for since some sites list them as "EX", "E/X" or whatever).  I like these the best.  I guess they must be expensive to make, since there aren't too many acetate sets out there in general.  These are 90 card sets with a few 12-20 card inserts (of which I'm only doing one so far until I find more of the others in dollar and quarter boxes).  Very simple and very pretty.  At some point I may dive into the baseball versions. 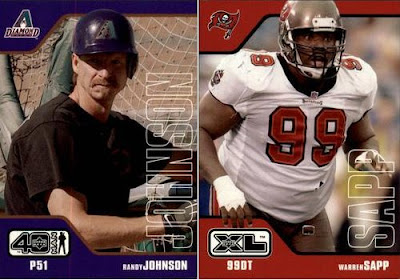 Though I'm generally excited by more old-timey designs, this is one of the coolest modern ones I've seen.  And both sets are massive as a bonus, but only with base cards.  It's Upper Deck's version of a Total set.  Base cards numbered up to four digits (regular numbers, not serialized.)  Gotta love it.  I threw in a bonus point for the photos, but I'm not sure if they're really unique or if it's just the expanded checklist.  There isn't much in the way of inserts beyond GU hits and a parallel base set, but the baseball version has these elusive Mark McGwire Highlight cards that are proving to be formidable to find, which cancels out their points. 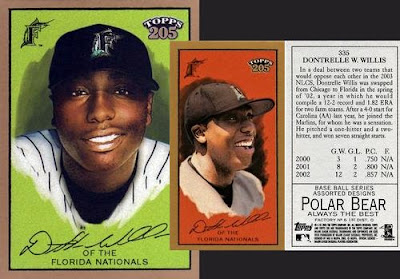 This is about as retro as you can get.  Topps 205 is based of course, on the T-205 tobacco issue.  It's the same set that I'm collecting the New York Giants team set from.  So it's sort of Topps Heritage does 1909.  There are minis in several series (with the differnt brands on the backs), some that copy the whole base set, and some that are just sections.  There are also base and mini variations, and a short series of minis that are an extended series with alternate images - drawings, not photos.  (I gave one positive point for the variations.  My rules...)  Plus there are the modern versions of the Triple Folders with a card on each side of a bigger action or portrait photo.  If I hadn't come across big stacks of the minis from a couple very generous blogger/traders, I wouldn't be as deep into them as I am.  They're fun, but only because I had such a head start. Not to be confused with regular Sweet Spot.  This is the set with the base set serial numbered out of 575 (which is a bitch).  It is most famous for the Stitches autographs on simulated baseball panels that have faded badly over the years.  I ignore those.  I really like the base cards and single jerseys that have photos of the stars that you don't often see.  I'm almost done with the jerseys, just lacking about a dozen or so of the big ticket ones.  I'm not convinced they are actual jerseys (or bats, or pants, etc.) worn by that particular player, but that doesn't bother me much.  I'm way behind on the base set - only have a few dozen of those.  Finding a big lot of them for cheap is almost impossible since they're serial numbered.  I continue to hope. Another one that's all about the retired guys.  (Hope Fanaticals can somehow bring this back to new sets someday).  A cool design that showed up again in 2008 UD Timeline.  This set is pretty much UD's version of Super Teams, but more modern subjects.  Grouped by year, the key players for champion teams are shown with very unique photos.  And there are stadiums on the back.  Not much in inserts except autographs and a parallel set, but they're not really needed.

OK, so I knew A&G was gonna show up on this list somehow.  I just had to analyze all my favorite ones and see who came out on top.  (And I decided to put them all in so I wouldn't have a total of 13 sets.)

All five A&G sets (these three and '19 & '20) all score relatively the same, except for a few details.  2018 is my least favorite base design but had better inserts than the other two, while 2014 had a short print insert for about every one (the ones that came with the binders), so those points kind of offset.  The more mini inserts I liked, the better the score.  Most that weren't the usual animal or geological feature tallied points.  So the totals of all three only differ by a ½, but distributed a bit different.  That's why they're all together here.  And A&G short prints aren't a big deal, so they only got half the penalty point. 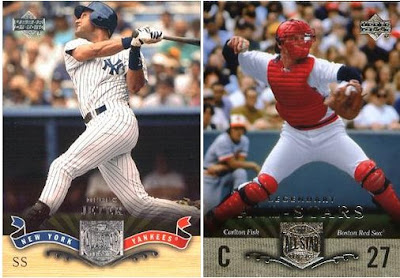 There is another set issued in the same year that's called UD Classics, which is similar, but not the same.  Both have inserts that are hard to find, but the UDC's are serial numbered.  The All-Star Classics base design is one of the most elegant from Upper Deck.  This is back when they made separate products to review current stars and legends instead of making them inserts to the flagship set.  (Well Topps does the latter, but I digress...)  The inserts are 20 card sets of MVPs and different facets of the Midsummer Classic.

I always say I'm the anti-collector in that I don't care about rookies.  This list is proving that the opposite is true.  I really like sets of retired players.  This one is simple, but uses additional pictures in the best way.  They're not "echo pictures" of the same shot repeated, but different photos - two on the front and another on the back.  I don't even pay attention to the inserts (which is rare for me),  I don't even think I've seen them in real life before.  The base set is just excellence.

Yep, they win.  It's been a landmark decision to stop collecting Topps flagship sets and switch over to Allen & Ginter.  I know a lot of you don't like the newer versions of the product, but I've enjoyed them a lot.  I'm not so fussy about not knowing who some of these non-sport people are.  It's really all about the creativity in the inserts.  Yes, they repeat Natural Wonders, sharks, planets, food, etc. but the others just keep getting better.  9 Ways to 1st Base, Superstitions, Star Signs, - these are the ideas missing from flagship.  Where Monsters Live (glow in the dark!!), Canines, and the colorful assaults of History of Flight and Reach For The Sky are what I love about Ginter.  Never mind the X version from the dark side or the recent glossy sacrilege, Ginter is just my motivation to keep collecting new cards.  There isn't much else...

How many of these sets have you never seen before?

How many did you collect too?

Any of them your least favorites?  OK, maybe don't answer that one... :)

Let me know what you think.  And do your own lists - make it a true Bat Around!