Collating, Checking Off, and Storing My New Cards From Steve

Steve from Collating Cards commented on a recent post that he had an Andrew McCutchen insert from 2014 that I needed.  We worked out a trade and here's what showed up yesterday.

One of those 1997 Team Timber inserts that I don't think are real wood, but are a "simulated wood-grain stock" with UV gloss coating on the fronts.  They even curl like wood.  This one is, appropriately, Chipper Jones.  These remind me a little of the Lumber Yards from 2002 40 Man. 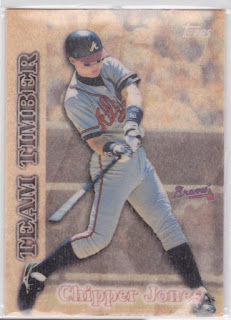 Moving on to the present century - that's still a little weird to say after discussing 1997 - we have some 2014 inserts, starting with the Cutch, accompanied by a World Series Heroes Johnny Bench. 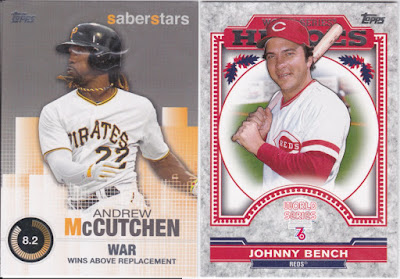 Also from 2014, the seemingly never ending MLB Debuts, which are interesting in that they depict certain players on their original teams, which are sometimes nowhere close to where you are used to seeing for that player.  No big surprises here, though it's been a while since Grienke was in KC.

And finally, some more inserts from last year's Topps.  Ichiro's countdown to 3000, which is magnifying his year(s) in Florida compared to Seattle, since they highlight a lot of the hits closest to the target number.   Also, Topps seems to have moved to making inserts of other companies' products, like these Team Franklins.... 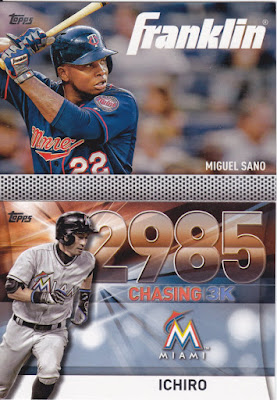 ...Or their own stuff.  First it was these Fire, and this year we have the Bowman Then & Nows.  Not to mention the Rediscover Topps with the backs that are blatant advertising.  C'mon Topps, you promised us great new things with your exclusive contracts, and all we're getting is marketing. 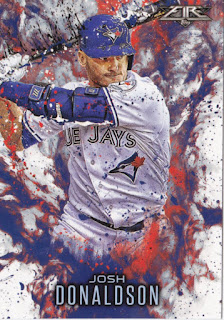 Now, to give credit where it's due, these ARE artsy and colorful.  And this year's Five Tools are an extension of this theme (though putting pitchers in them shows that the Topps suits don't know baseball very well), but I don't need to see the same thing again next year.

Anyhow, thanks again to Steve for a nice selection of list hits!
Posted by GCA at 10:56 PM