Make Me Your Capitals Capital!


Was just looking for a couple cards in my box of Washington Capitals hockey.  I was on the Trading Card Database trying to fill some of their "Close To Completion" lists.  If you haven't been on there, these are lists of the last few cards in a set that they need scans of either both sides or sometimes just the front or back.

My Capitals team collection is one of the lowest priority (and around here, the lowest availability) of all the set, player, and team collections I maintain.  It is comprised of one binder containing mostly 70's and 80's O-Pee-Chee, and one three row white box.  The box starts with 1990-91 and is divided by top loaders by season from then until now.  Well sort of. 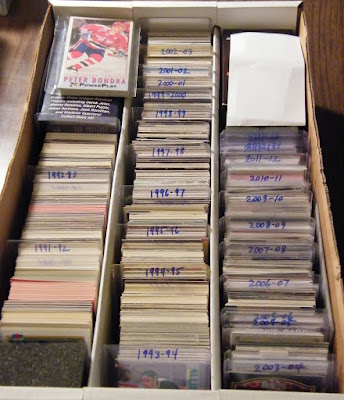 Since I haven't bought really any packs or boxes of current hockey since about 2011, and have only traded for a smattering of singles, the last several years are very sparse.  It's so bad, I can fit all the cards from each year since 2011 into single pictures.  (Note: the day after I drafted this post, I got a package from Trevor at the O-Pee-Chee blog Supporting the Minnow and he added fourteen cards to the lot displayed here, almost doubling my count!) 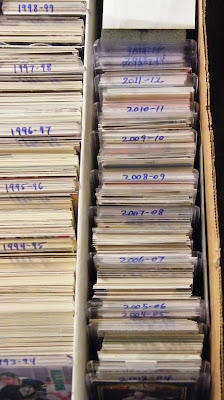 So if you're a hockey trader and you have a bunch of extra Capitals cards, hit me up!  I have a decent amount of hockey available, it's just all from a lot earlier - late 90's to mid-to-late 2000's for the most part.  And I'm OK with trading baseball and football for them too.  I might be a little slow telling you if I have some of the 1990's and 2000's because I don't know the designs well and always get confused by the copyright date vs. the season, especially if there are no stats on the back.  But I'll learn!
Posted by GCA at 8:00 AM
Labels: blogger trades, hockey, How I do it, My stuff