Last year on the 26th of June, I saw that the Dodgers were playing the Pirates on ESPN Sunday Night Baseball.  Clayton Kershaw was on the mound.  The Pirates were sending a rookie to his first start - a kid named Chad Kuhl.  I kinda like both teams, so I watched.

Kershaw actually struggled, giving up four runs in the second inning, while Kuhl gave up only four hits and three runs in five innings of solid work.  He even made Kershaw work to strike him out, battling through eight pitches.  The Pirate runs scored right after that.  Pittsburgh's bullpen put up all zeroes through the ninth FTW.

My favorite memory of that game is Pirate manager Clint Hurdle clutching the face of Kuhl and beaming with pride on the young man's performance.  It was a great underdog story, and an entertaining game.  There was a Topps NOW card made of it, #185. 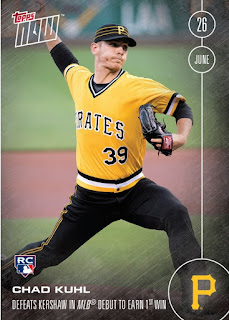 So, of course, I put him on my list of potential player collections.

Well, this week, he officially became the latest one.

I was perusing eBay for a few different things last week, and put his name in.  There are lots of "complete your set" or "pick singles" auctions on there that allow you to pick individual cards from a pull-down menu.  His name is on a whole bunch of them.  But I was looking for multi-card lots of just Kuhl alone.  I saw one that had his Bowman Chrome Refractors in it.  Black & Gold, Blue and Orange Shimmer, and regular, blue, purple and green refractors.  But there were 45 of them!  The asking price was right around three blasters.  My initial reaction is one I have for most auctions of redundant copies of the same card - "Put them up as one-of-each groups, not a huge pile!"  But I gave the seller (brianthebrain) the benefit of the doubt and actually sent him a message.  I said (rather sarcastically) that I wasn't a dealer, so I only need one of each.  Would he sell me the seven for the same individual rate that the lot was listed at (roughly $9)?

He countered with an offer to sell me the whole shebang shipped for just under the price of ONE blaster.  I replied "Well when you put it like that ... SURE!"  And he did!

So a whole boxload of these showed up today, very neatly packaged. (Here's one of each) 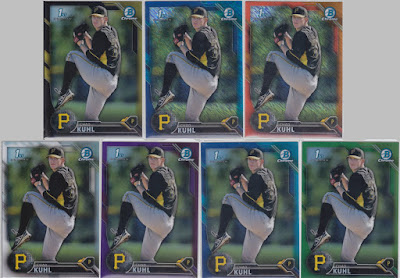 Black & Gold, Blue Shimmer, Orange Shimmer, (all unnumbered) Regular refractor (/499), Purple (/250), Blue (/150), and Green (/99).  I pulled a set for myself, and one for a Pirate collector I know.  The rest are basically up for trade, especially for other Kuhl cards I don't have.  Which is most of them.  I only have the base Topps Update, and now these. 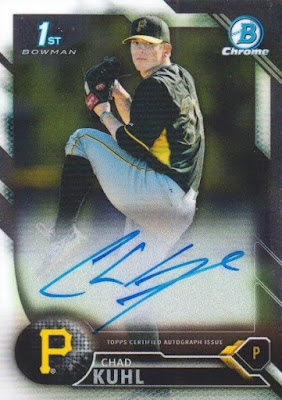 I mocked up a black border Heritage.  Need two of the regular card as well. 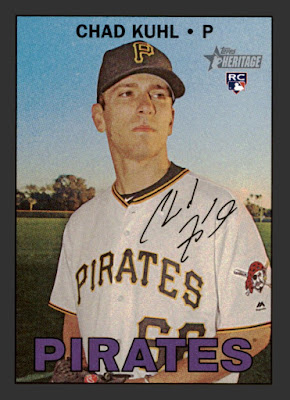 He's also got all the usual parallels in Update... 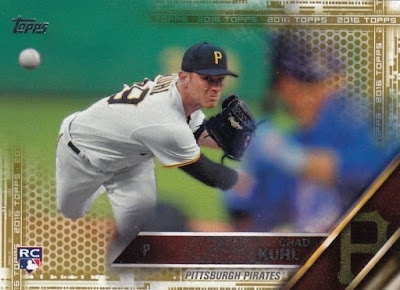 And a few minor league cards...

For any of these above, I've got some of last year's Heritage parallels available to trade. 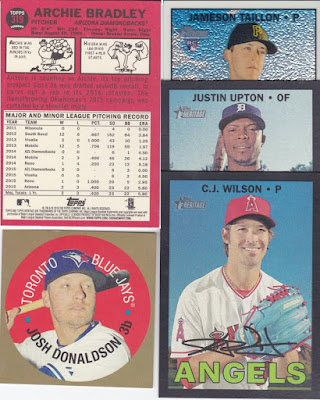 Some high number black borders too.  A lot of decent stars here. 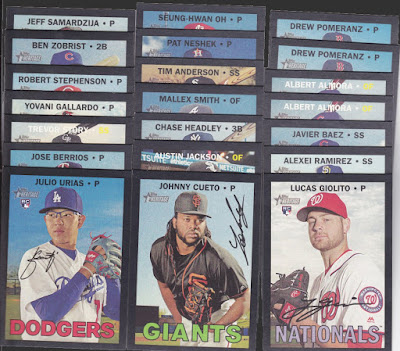 Not to mention a stack of regular High Number dupes.  I have wants for the High Number set on my site if you don't have any Chads but you need some of these.