Topps Runs It Into The Ground Again

I'm a set builder, and I like inserts. Back in the day, when you got all the regular base cards, you were done. Then, around the mid-90's, special insert cards started showing up in packs of flagship sets. So there was the base set, and some little subsets to complete before you could say you had everything. Nowadays, it's almost impossible to collect a complete "master set" because of all the parallels, short prints, gamers and autographs, and retail exclusive inserts. What I'll do is pick out the inserts I like and get those, maybe a gamer of someone I like, and the base set and I'm done.

For several years, there were so many sets to choose from that you got what you could at the time and then could maybe go back later and pick up others if there were still boxes and singles available. Lately, with the Topps exclusive contract, there is really only one major flagship set, so it's been relatively easy to finish it with a reasonable amount of inserts to go along.

But more recently, even this is getting overwhelming. Inserts like Highlight of the Year, MLB Debut, First Home Run, this year's 1987 tributes, have far exceeded the quantities of the typical insert sets.

I researched the numbers, starting in 1996, which seems to be when Topps started putting inserts that are independent (numbered separately) sets, into regular packs of flagship. The numbers include inserts that came with Series 1, 2, and Update. I didn't include jersey, autograph, manu-relics, or any low serial-numbered ones, just regular cards. Also omitted oddballs that were packaged separately, or player reprints (like Aaron, Mantle, Mays etc. around the turn of the century) because their number was dependent on the existing cards of that player. I also did not include factory set exclusives or early retail-only items. 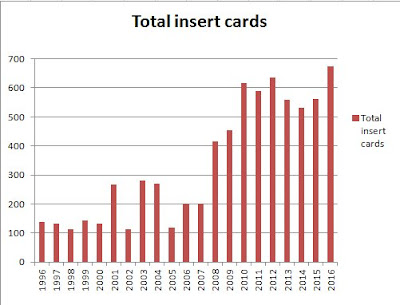 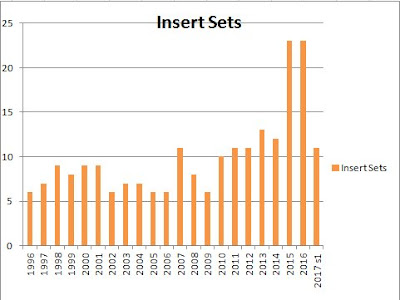 The distribution of inserts has changed as well. Up to 2010, there were between six and nine insert sets produced. (11 in 2007). Then between 10 and 13 for the next few years. 2015 and 2016 doubled that to 23! Base cards only increased 110 for the three series in those years. So instead of inserts being a fifth of the total number of cards, they have become roughly HALF! 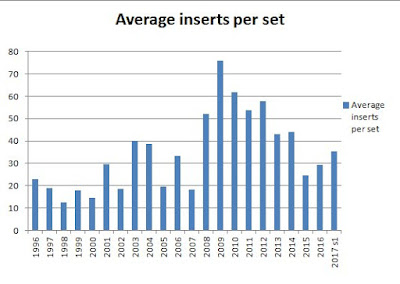 I think an insert set is fine with between ten and 25 cards. Any more than that should be spread among all three series, and limited to 75 or so total. Maybe 100 for an original idea that applies to a lot of players. But 100 cards done three times is its own set! It's too much to put in with the base flagship product. Topps keeps putting out repetitive products to fill out their catalog - make some of these inserts into separate products! Then you may actually come out with something with a little innovation! You're killing us completists with 1100 base cards and 675 inserts on top of that! At best, they run 25¢ each in the secondary market.

But a lot of them are recycled versions of the same thing.  Mostly annual reprints of famous cards.

2017 Series Two is about to release.  What will we be buried in this time?
Posted by GCA at 8:00 AM
Labels: commentary, set bloat