Now and then when I'm flipping through my vintage binders, I come across a page that has some interesting aspects.  When you arrange a set in numerical order, you get certain groups of nine on each page, of course.  Here's another interesting full page from 1960. 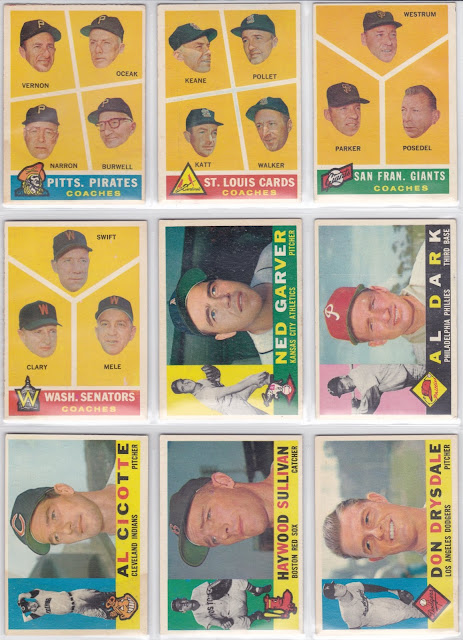 Gonna work this one backwards, starting at Drysdale in slot #9.

There are lots of head shots in 1960, and really in most 60's sets.  Drysdale's is hatless, which they sometimes did if a player may have been changing teams.  Don't think this was the case here.  Gotta love the slick 'do with the part.

Don't know a lot about Al or Haywood, except I've seen them on cards a lot.  I don't like it when you get three in a row with the same color scheme within the set.  C'mon guys, mix it up better!  Though the names are fun - you got a Ned, a Haywood, and two Al's in a row.

Ned Garver is with said A's.  I always think of this when I see his name.  Guess it's just because it rhymes.

Posted by GCA at 8:45 AM
Labels: Joy of a completed page, old stuff, trendy posts