Last Stop ... And Best Bargain Of The Trip!

For the last shopping day in Michigan, the destination was All Star Sports in Grand Rapids.  This was my third or fourth trip to the shop in the western part of the state. 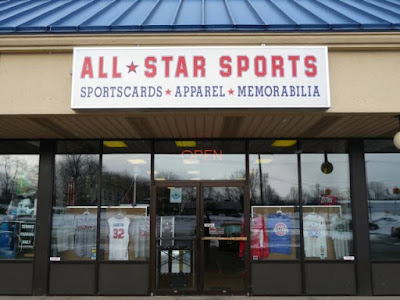 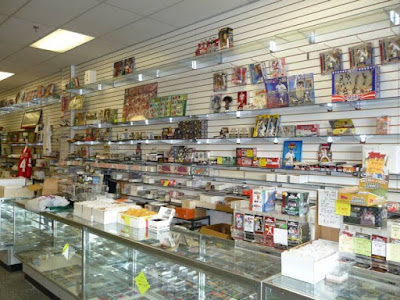 Here's my haul from All Star. 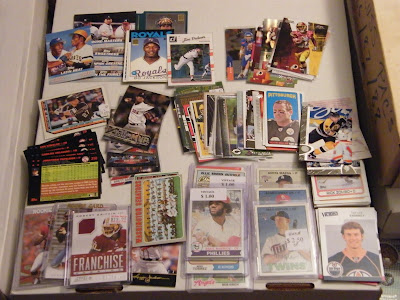 Completed my 2001 Update set except for a few regular player cards and a couple of the Who Would Have Thought inserts.  Also hit some red back 2007s, some current inserts, football set singles, Redskins, and killed a Parkhurst hockey set.  These all came from the set singles, quarter and dime boxes.  Buyback player collection guys were a buck, and a few Heritage short prints for $2.50 each.  Got the Victory rookies fairly cheap, but messed up with the 90-91s and got Topps instead of O-Pee-Chees.  Picked up a few RG3's for about half off sticker price, since he's been so successful.

The bargain of the visit, and probably of the whole trip, was what I call the Gypsy-Ginter box.  There were a few big boxes and binders at the front of the store that were on special sale.  Most were marked "Whole box" or "Whole book" with a regular price of 10 or 25 dollars.  A sheet hanging nearby denoted a sale that drastically reduced these rates.  Don't remember what the 10 buck ones went down to, but the $25 ones were $8.88!  Check out the one I picked up!


For the picture, I sorted them all by year and laid an example card on each run.  The 2014 and 2016 Gypsys, and the 2015 Heritage are just those stacks.  Everything else is the whole row underneath.  For example, the 2013 Gypsy Queens (the grey/green ones in the first row) start under the card laying flat and go to the back of the box. the 2011's are the most populous, at least they will be after I take a starter set out of the 2013 Ginters that presently take up the whole last row.

This box is going to be major trade bait as some of the batches aren't enough to start a set, or are of sets I already made.  I've got 2011, 2012, and 2014 Gypsy already, as well as 2014 Ginter.  The short stacks of GQ and Ginter are likely all for trade.  I'll let you know about the Lineage.  There are some duplicate inserts in a lot of these sets, as well as some short prints.  Send me your lists and let's trade!
Posted by GCA at 8:47 AM
Labels: dealer purchases, Michigan haul, pimpin' ain't easy, trade bait