My Other Collection Is Inactive

I mentioned in a recent post that I collected comics as well as cards.  That's collectED.  Past tense.  Had a request to show my collection here. 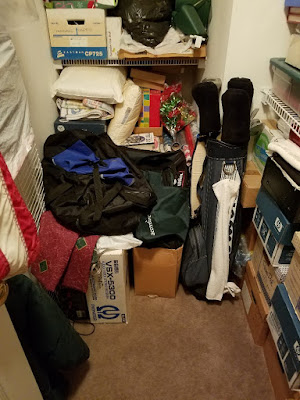 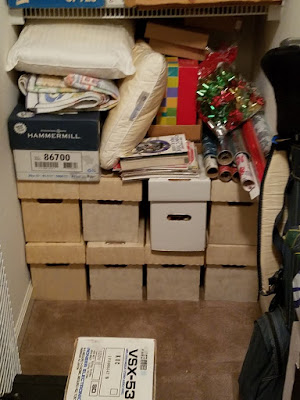 That's better.  The brownish ones are the long boxes.  The bright one is one of two short ones.  So I basically have eight long boxes worth.  Or about 2000 comics. -ish.

I did take an inventory recently when one of the guys on my Tuesday night pool team gave me an old Overstreet price guide (seen here on top of the pile).  I'm not going to dig out any of the boxes right at this moment, but will do so for future posts.  Luckily, I have some random books stacked on top for some odd reason.  They are a decent representation of some of the stuff I like in comics, and will give you an idea of the timeframe my collection occupies.

View the spreadsheet here.  (Hope you guys can see it) Update: changed link to shareable.

My favorite character by far is Marvel's Deathlok.  Nope, not Punisher, or any of the X-Men (I have exactly one X-Men book), or anyone on top of the popularity list.  I found the first few of his newest series while I was in Michigan.  These are the first comics I've bought in years.  I've got pretty much everything he's been in since the original Tales To Astonish #25 back in the 70's.  He'll probably get his own post at some point.  Go figure, the Borg guy likes cyborg comics, right? 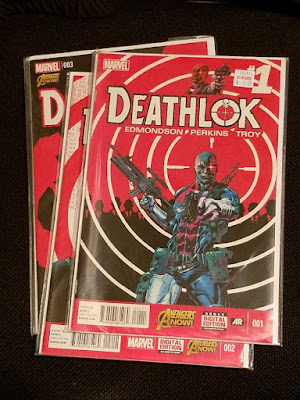 I am a fan of Batman.  Got into him a bit later in my collecting.  Have the original Dark Knights (first printings too, I'm pretty sure), and several of his titles during that time.  I think these may be duplicates or something. 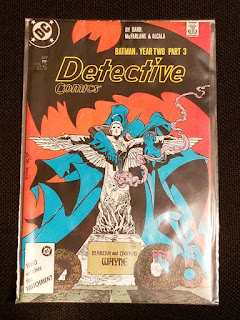 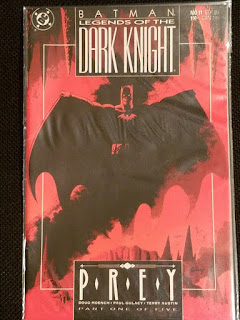 Back to the Marvel side, (they are the majority), Iron Man has a big presence.  Started just a few issues before this one.  Have through the famous alcohol issue and beyond.  The 35¢ price is the most common among my collection as a whole.  You can see that this one hasn't appreciated for a whole lot of money.  When I did the inventory, most of my stuff rated at about three dollars an issue.  Makes it easy to fill in the gaps at least. 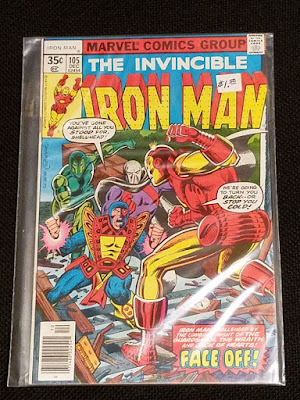 Have both series of these catalogs of characters, as well as the DC equivalent.  This is all before they revamped both universes in the mid 90's sometime.  I think they have done it more than once.  Makes it weird when I see newer stuff, especially movies like Guardians of the Galaxy.  I don't know who those guys were, but they aren't the Guardians I know.  More on that later. 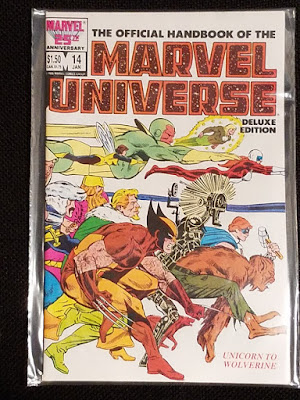 Got into a few independent titles as well.  Liked this one especially, and not just for this gal (although it helped.  Have that poster somewhere too.)  This one's set in the 40's during the War.  Actually have a single issue from 1946 or so that I'll pull off the shelf later. 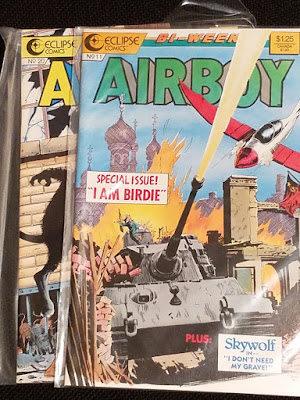 Got into a few of the "higher-end" lines that were a bit more than one brightly garbed character socking another.  Dreadstar was one of the first higher-end comics that I remember.  This particular series is reprints of the originals and is done under the Epic Comics moniker. 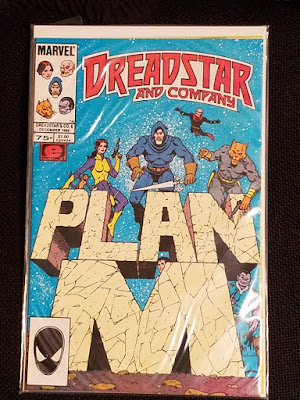 And finally, bringing us back to the space theme that we're used to around here, the comic version of the animated series that totally blew my mind back in the day.  Star Blazers was just so epic and dramatic when I saw it the first time.  I was enthralled.  I have the softcover graphic novels of the first series and would still pick up the others if I ever find them.  I think this book is a story made "after" the tv series. 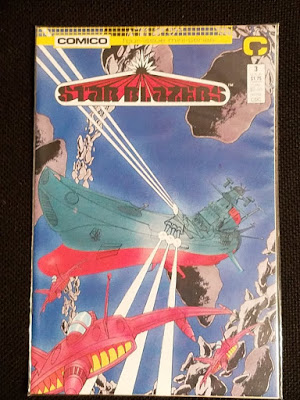 So that's a quick sampler of what I have in those boxes.  Later, I'll delve into stuff like Swamp Thing, Hulk, the complete run of ROM, Spaceknight, the Flash, Devil Dinosaur, Fantastic Four, Marvel 2-in-1, Team-Up and other Spidey titles, and much much more.  But for now, back to the cards!
Posted by GCA at 8:03 AM
Labels: collecting quirks, comics, My stuff, non-sports, old stuff