Have You Ever Gone Shopping For One Card And End Up With $80 Worth?

Yeah, it's called online card shopping every time to some of us.

Well I don't know about every time, but that's what happened this time.  In an effort to kill my 2008-09 O-Pee-Chee hockey set, and eliminate another one of my top 10 needs, I decided to go on SportLots and see who had it. 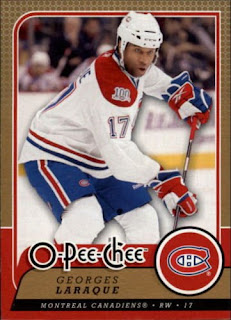 So I looked it up and found that only two sellers had my Laraque Update card.  One was a guy I think I've bought from before or maybe just had seen his name next to a lot of singles that I was perusing at one time or another.

Anyway, so standard procedure (because SportLots sellers all charge separate shipping) is to put a card from a seller into my cart, and then go into the cart to use the search feature that just shows inventory from that particular seller.  Then I basically search for all my significant wants from whatever sports they carry.  In this case, it was hockey of course. 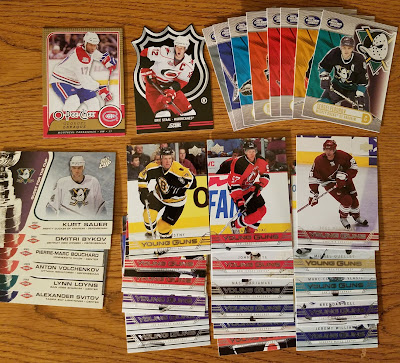 Also picked up some 2003-04 Calder, leaving four...Some rookies from my favorite year of Pacific sets - 2002-03 Quest For The Cup....and a slew of 2006-07 Upper Deck Young Guns rookies for less than a dollar each.  I remember one of the first Nationals I went to, we were giddy to find Young Guns for a buck a shot.  These wouldn't have been very old then, so I guess the depreciation is normal.  Good thing, 'cuz I still need a crap ton of them to kill a few Upper Deck flagship sets in the mid aughts. 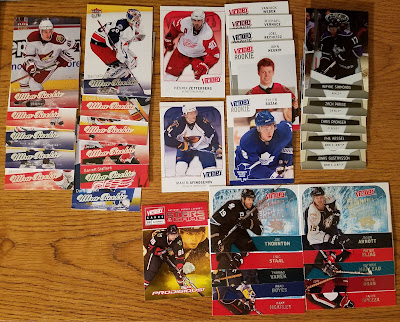 Next up, more cheap rookies from 2008-09 Ultra...Finally the Zetterberg from 2009-10 Victory, plus an Update single and some more rookies.  There's a series of late numbers in these that I can't find on the TCDatabase.  I imagine they were redemptions in another (couple?) Upper Deck sets at the time.
Anyway, also in this shot, the final Leaf Certified singles from 2010-11.  Finally killed one!  Or at least the base set.  I probably just skipped the rookies and whatever else.  I do that a lot in hockey.  Finally, some inserts from the same Victory set.  These are really nice and clean designs.  There are freakin' 50 of those GameBreakers.  I still need eight more.  Same deal with the Stars Of The Game.  Need ten more. 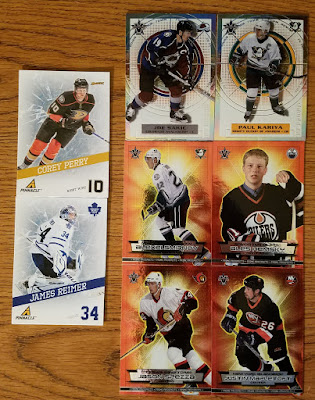 Bouncing around in years again.  Two inserts from '11-12 Pinnacle mixed with 2002-03 Vanguard inserts.  You have to read the fine print to see the actual insert's title.  These are In Focus (2), and Prime Prospects (4).  Nice and shiny though. 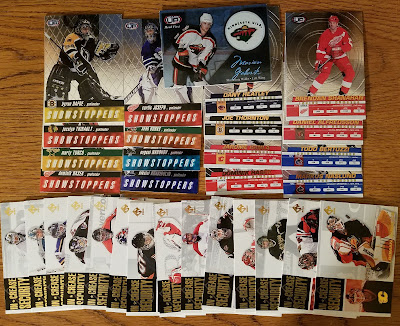 The vertical (portrait) oriented ones at the top are from 2002-03 Pacific Heads Up.  I didn't actually start with any of them, but since they were only like 25 - 50¢ each, I went for it.  Always like the goalie inserts especially.  The InCrease Security are from my favorite hockey set which I'll show in a second.  These too are inserts I hadn't started before but now have all but three.  Another all-goalie insert set. 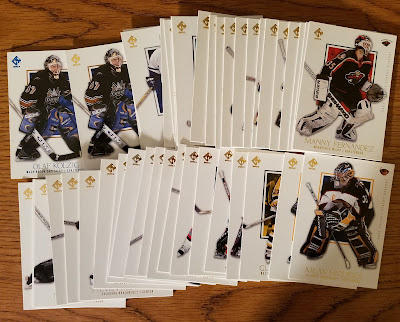 And finally, the cream of the crop, and the other reason I went so nuts from this seller.  He had all of these from 2002-03 Pacific Private Stock Reserve.  Now I'm only short 15 cards from the first 100.  The next 50 in the set are actually jersey cards, which I'm down to the last half dozen tough expensive ones.  After that, a slew of rookies follows that I've largely ignored.
These are the most elegant design of any sport that I've seen.  I don't remember how I got my first lot of these.  Don't think it was a wax box.  I know there are color parallels and I think even a retail version (which I hope I haven't mixed into my set).  Threw in the blue parallel Kolzig for my Caps collection.

So thanks to SportLots and seller cttcdork.  Weird name, but great selection.  Though he doesn't apparently do the loot thing on there.
Posted by GCA at 3:47 PM
Labels: dealer purchases, mailday, set killers