The second in a series of my top ten wants.  Not necessarily in order because they're mostly just the last card left to complete a set and aren't that special otherwise.

#365 in the 2002 Topps baseball set has multiple personalities.  Or at least it's not really just one card.  It's 73 cards, one for each of Barry Bonds' record setting (insert asterisk here?) home runs.  It's also of course, the last card I need to kill the base set. 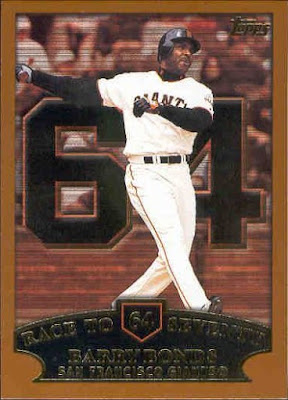 I'm really only looking for one.  I have no great need to complete the (sub)set.  Any one will do.

I can't really say that I've ever seen one on a dealer table anywhere though.  COMC has most of them for prices ranging from $18.75 (for #70) down to a buck sixty eight (ironically for #68).  Is that reasonable?  I get that the #70 would be in demand, but do the others usually go for that much?  A much more reasonable rate for these would be 50¢ or so each since there are so many and except for the big number, they're all exactly the same.  And Bonds is just so adored by millions....

Posted by GCA at 8:00 AM
Labels: priority wants, set killers