Got three boxes of Stadium Club from Charm City Cards for a special price on multiple boxes.  (They've actually gone down from there already!) 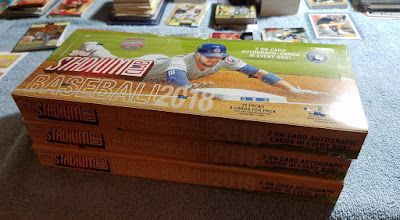 This is about the only product this year that I had any enthusiasm for.  I like the base card design even though the name is in foil.  The team names can blend into the background a bit, but it's a nice original concept.  I haven't had a chance to scan the inserts or notable base cards yet, but snapped a few shots as I was ripping packs.

Sixteen packs a box, with 8 cards each.  Retail is five cards each.  (I supplemented my three hobby boxes with a preview blaster late last week.)  Two autos per box.  Don't remember if I got more than one insert or parallel per pack, I think it's just one each....

What I ended up with at the end was about 50+ cards away from the 300 count base set, which didn't seem too bad.  By the third box I was setting aside runs that I knew I had seen before.  About a third were base doubles (second stack below).  The third pile is the inserts, parallels and autos. 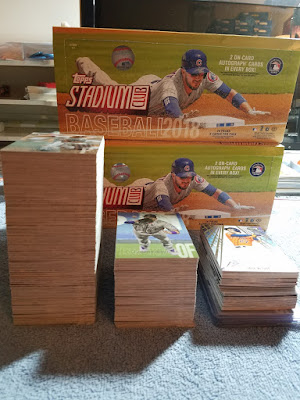 Finally, here are my autographs.  I was hoping for a major veteran pull, but all six of the ones I got had RC logos on them, which is disappointing to me.  Though Acuna is apparently a major pull.  Looking at the full checklist, I counted up the big names I recognized and came up with about 25 possible veterans out of 93 total.  So three quarters of all the possible autographs are flippin' rookies.  Ah well, the hype machine rolls on.  Allen & Flaherty have decent signatures at least.... 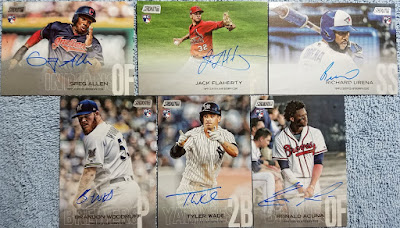 So except for the Acuna, I'm open to trade offers for the rest of these.  Might do another post as a review, so you can see the inserts and some base cards if they haven't been overexposed already.

In all, I really like these.  The chrome refractor parallels are really cool looking.  And there are only 90 of the chrome series, but they are probably going to command high prices or I'd consider building that set too.  I'm always so glad when I don't duplicate the inserts between two boxes, and it didn't happen here.  The downside is there aren't any to trade, except one parallel - insert parallels are really useless.

I would highly recommend diving into Stadium Club this year over and above any other 2018 product.  I'll probably get some more - likely retail, unless I sell the Acuna for a big wad of cash.  Of course, it's even better to trade, so chime on in!
Posted by GCA at 9:15 AM
Labels: dealer purchases, duplicates, review, ripping wax, trade bait