Saturday was the big show in Chantilly at the Dulles Expo Center.

I finally killed the three main vintage sets I've been working on for the past couple years!  1960, 1970, and 1972 Topps are finished.  (Barring gremlin attacks of course.  And I might upgrade a card or two later, though the '70s sets are mediocre at best.  The high numbers are probably the best condition overall compared to most of those two sets.)

The three remaining titans for 1960 were McCovey's RC, Yogi and Duke.  Got the Willie & Duke at one vendor, but he didn't have a Yogi for me.  The next guy did.  Both of them use the "retail value / our price" sticker method.... 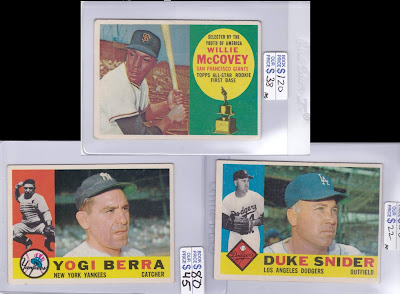 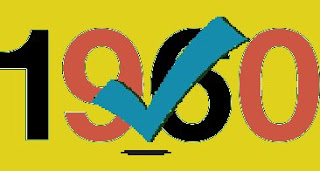 The next set to fall was '70 with the triple player card of a Fro-less Oscar Gamble, "Boots" Day, and Angel Mangual.  I don't think you'll find a more eclectic combination on a rookie card.  It ran me about half a blaster.  More than I was willing to pay in the past, but this time I figured "I'm just gonna get it done this time." 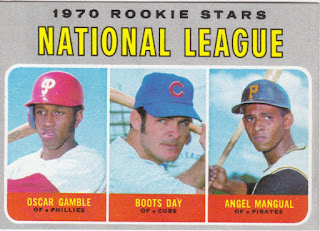 And finally, it's fitting that '72 was completed on the same day as '70, because not only were they started at the same time, but the source lots were both from the closing of my favorite local shop several years ago.  As I mentioned before, these two aren't the prettiest versions of the sets, but they're mine.  Made for some cheap high numbers most of the time.  At one National, I got a couple dozen for about a buck a shot.  Not today.  Again, the mission was to bag the last four and be done.  Funny that three out of the four were the same color scheme. 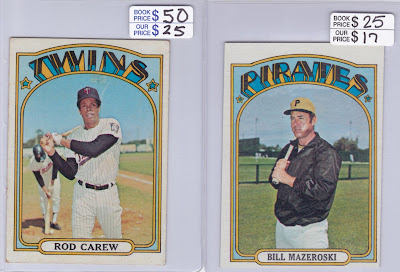 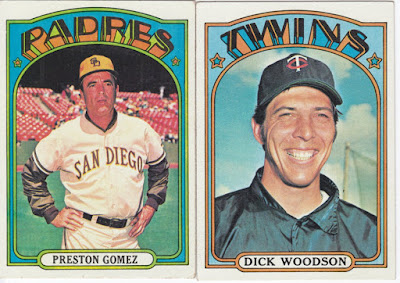 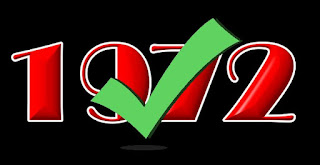 I think Woodson is sharing the laugh with those that giggle about his name.

So now I am set to go full steam on 1964 Topps, and maybe start 1957 sometime later this year or soon thereafter.  I already have all the Dodgers, so that gives me a head start on several of the big guns.  I might approach it a team at a time just for fun.

Next time, I'll show the other highlights of my show loot, including a real bargain on a white whale football card.
Posted by GCA at 12:07 AM
Labels: collecting milestones, old stuff, set killers, show loot