My posting schedule is all jacked up.  Between the 15 monster boxes, football season, and adult responsibilities, I can't seem to keep up Monday - Wednesday - Friday posting.

Anyway, here's a quick glimpse at the six baseball boxes from the monster hoard.  I finally broke down and stacked them on the floor in groups by year and piles by set.  This consolidates all the chunks I kept finding in different boxes.  It's amazing to me how this kind of stuff gets so thoroughly blended together over time.  At least I assume it was over time and multiple people sifting through.  It may just be that they all got dumped on the floor and picked up hastily. 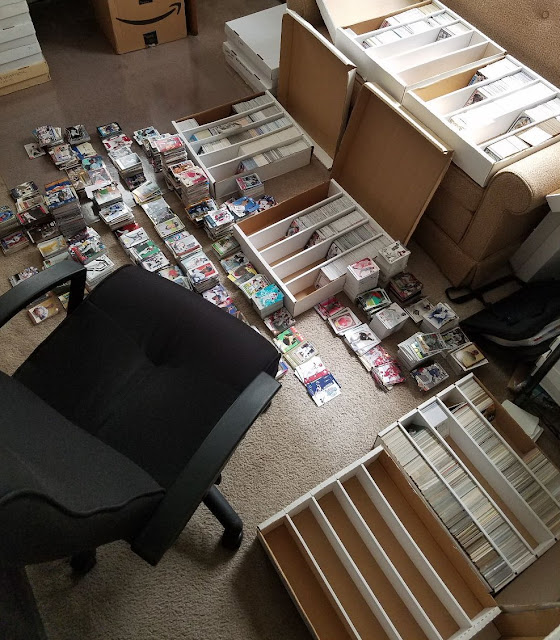 So when you walk into my card room now, this is what you find.  I managed to empty one box completely.  The other partial boxes on the couch are big chunks of the same sets for the most part.  The full box on the floor is everything that is older than the year 2000.  There is about half a row of 80's and some 70's, including a good stack of '74s - mostly stars. 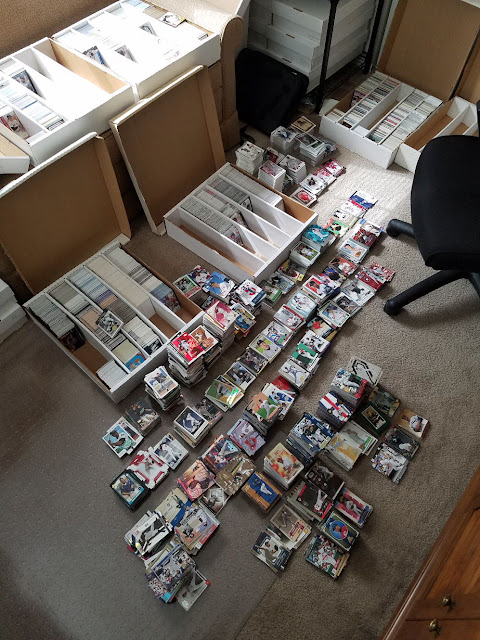 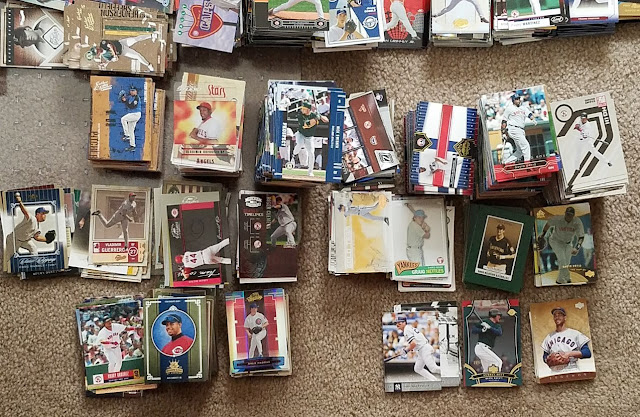 Here is a closer look at the 2005 pile.  There is a bunch of Leather & Lumber, Studio, Prestige, Donruss Champions (another pile about that big in my extras already), Upper Deck, Donruss Elite, and Diamond Kings.  I've got 3/4 of a monster box of 2005 extras that I'll be combining with these.  That's my biggest year in extra stuff.  If you have any big lists from these sets, let me know.  I'll be showing all these piles in more detail later, and once I combine them with my other extras, there will be more sets with big chunks available.  And of course, I'll probably snarf a few set starters for myself for things I don't have.

I'll also take requests for bulk team trades from all this.  I know many team collectors just focus on Topps, but I've got all the different companies represented well.

And there are a lot of star cards and serial numbered parallels in this batch as well.  Rookies too!  There are a lot of Greg Maddux, Roger Clemens, Pedro Martinez (a bunch went to Gavin at BBCBreakdown), Jason Giambi, Vlad Guerrero (Sr.), Manny Ramirez, Randy Johnson, Frank Thomas, Mike Piazza, Nomar, Ken Griffey, Jr., and to a lesser extent -  Ichiro, David Ortiz, Albert Pujols, Jim Thome, Chipper Jones, and Mike Mussina.  So if you collect those guys and need them in these kind of sets, or your down to the big stars for the whole base set, let me know those too!
Posted by GCA at 11:48 PM
Labels: Big batches, duplicates, pimpin' ain't easy, the whole thing at once, Whatcha Need?