This is the first of several posts chronicling my vacation.  My collector friend Stuart was visiting from Michigan, and we hit all the area shops, plus one we'd never been to, and ended the week with two days at the big Chantilly show.

As soon as he arrived, we were on the hunt.  Mere minutes after he got to my house, we were on our way to the closest cardboard sources.  This was Saturday, the 18th of June.

It had been a long time since I had been to either Prime Time Sports or Old Glory Antiques in Frederick.  Probably pre-pandemic.  Only found a couple singles from either place.  Nothing of real note, so I didn't scan them all.  But there was this Sparky Lyle jersey card... 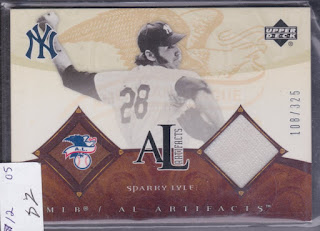 Not sure it was worth all $12, but it looks nice, so I said what the heck.

Sunday was our first full day shopping, so we headed north into Pennsylvania.  The first stop was Jason's Sports Cards in the Morning Sun Marketplace along Route 30 towards York.  I'm pretty sure it used to be the MorningStar Marketplace, not sure why or when it changed.  Anyway, he had some sales going - all $4 cards were half price I believe, though all I got were dollar cards. All these were a dollar each.  Those tags are bright red.  Not sure what the scanner was doing. 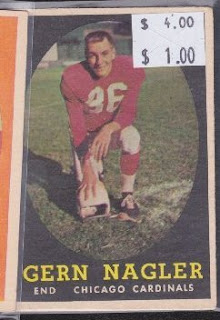 Also nabbed another '58 for my set.  (Had scanned it with some others from another store.)

We also hit one of the better antique places in the same area.  Yesteryear Antiques in Hanover is a regular stop not just for cards, but a little bit of everything. 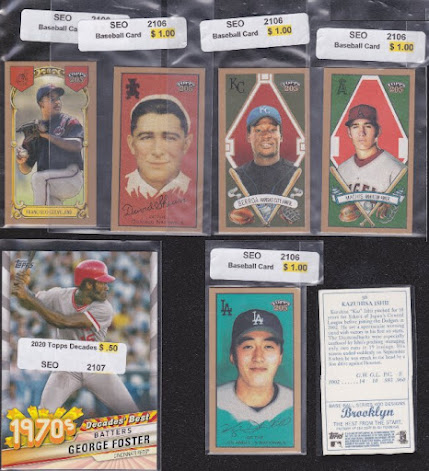 The biggest card guy there (of about 2) can be pricey, but I found a batch of my Topps 205 minis for a dollar each.  Even the rare Brooklyn series.  I'm not trying to collect the Brooklyn ones, but couldn't resist one for a buck.  Finally got my Foster insert from Decades' Best too. 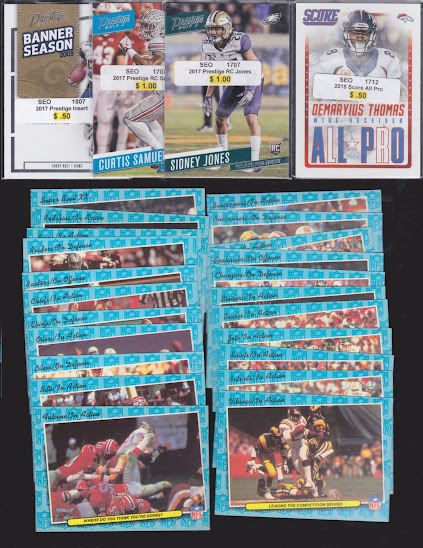 Prestige football rookies and inserts will become a theme throughout all these posts.  These were the beginning.  Those All-Pros must have been retail only or something, because I hadn't seen them before even though I have a whole monster box of 2015 Score including parallel inserts and everything.
The blue Fleer Team Actions were a major score - only $3 for the whole batch.  They're all minty condition and I needed the majority of them for my set.

The final stop was Black Rose Antiques, also in Hanover.  There were a few small stacks of cards among the many booths of classy items, and we found a couple to take home. 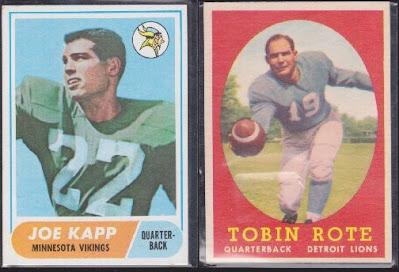 Decent names for a buck a shot.

Next time - a shop whose stock is primarily sorted by star and team.  Plus some really great finds on big vintage football stars.