Back 2 Back Show Weekend Part 1: Ephrata

Two of the biggest shows of the year coincided this past weekend.  I was a bit annoyed that they fell together, but there are worse problems to have.  Had to get up early-ish both days, but it was worth losing a few hours sleeping in to bring home a big haul ~ twice!

Saturday's event was the annual display up in Ephrata, PA which is north of York.  It's about an hour and a half drive from my house, but it gets easier every time.  I remember the first time I went up in 2016, it was snowing really hard.  This year, it was sunny and close to the 70's.

I snapped a couple photos as I was calling up my various want lists on my phone.  I patched a couple shots together to show an overall view of the place.  The show is held in the Recreation Center adjacent to the school complex.  Most of the gym is filled with tables except for a seating area at the far end that is used during the auction. 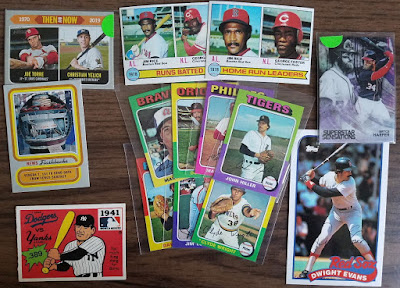 I didn't separate my pictures by dealer, so some of these are amalgamations of different buys.  This one is player collection stuff.  The Heritage and Harper (who I don't really collect - especially now that he's gone - I just grab an occasional nice looking card now and then) are from a different source than the rest.  The '79 League Leaders are potential upgrades to my Foster binder, just picked on impulse.  It may be the two '77 LLs I need to improve.

The '75 minis are from Joe, who introduced himself with a handshake to every customer that came by.  It's good customer service training, but gets a bit weird after a while when you're sitting at his table pulling cards.  He had some decent (and cheap) stuff from the 70's, including the minis, at 25¢ each.

The Dewey '89 design is my last player collection guy from the LJN Baseball Talk set.  These are oversize cards with a mini record on the back that plays in a custom player. 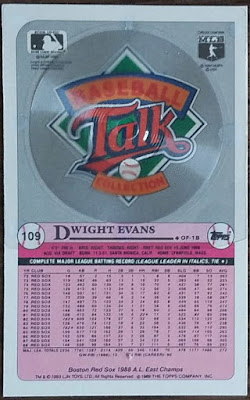 The Keller may look familiar, since I got one like it in my post about the COMC order I placed early in March. 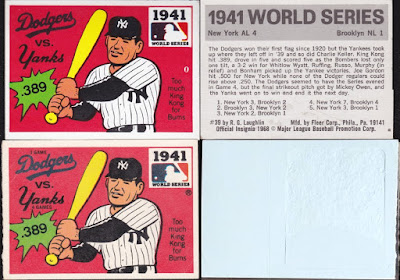 This one was different.  The top one is my COMC specimen.  The bottom one appears to be the backing of a Fleer team sticker.  I knew I had seen these on the backs of stickers before.  Lo and behold, it's from the 1980 Team sticker set.  Had the Dodgers logo stickers on the front.  Might have to find one with the stickers still intact and then give this one to his nephew.  Or was it the Mets?  Or San Diego?  *sigh*....Luckily, I don't see any with the '39 series on the back.  So I guess I'm looking for THREE more. 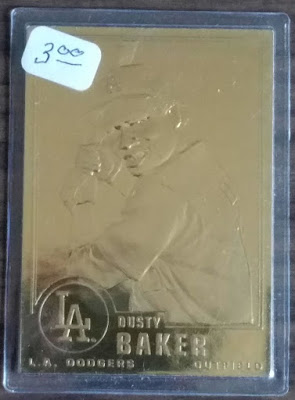 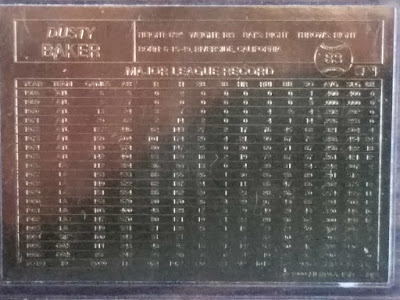 Anyway, on with the loot.  Picked up one of the last few of these 1996~2003 Danbury Mint 22K Gold cards.  That's not a top loader.  These things are encased in a thin plastic holder that is sealed.  They are a unique design that reminds me of 1963 Topps.  Complete with full stats on the back, as long as you tilt them to the light to read them. 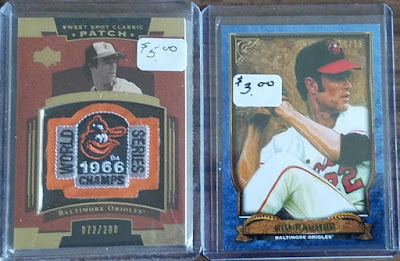 Picked up these Palmer serialzed ones along the line too.  I think these went with the Heritage and Harper from before. 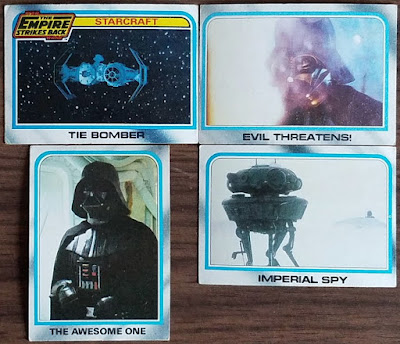 Back at Joe's I found these Series 2 Empire Strikes Back cards.  They look fine from this angle, but if you tilt them toward the light... 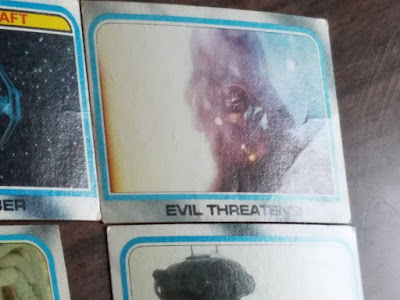 ... not quite so pretty, but for around a quarter each, I'm not unhappy.  They'll be fine in the pages. 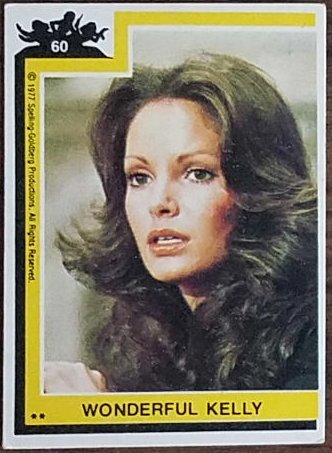 Speaking of pretty... I threw in this Charlie's Angels card from a stack he had there.  I didn't take the opportunity to go through the whole thing, but this one will go with the other handful of Jaclyn Smith cards I kept from back when they were new. 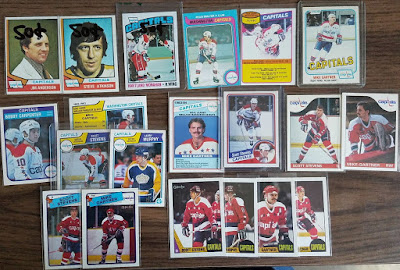 Found a dealer at the end of an aisle that had O-Pee-Chee hockey.  And that's without Topps or Upper Deck.  He collected only OPC.  Filled out some of my new Capitals team sets from the 80's (and the two '74 Topps from elsewhere). 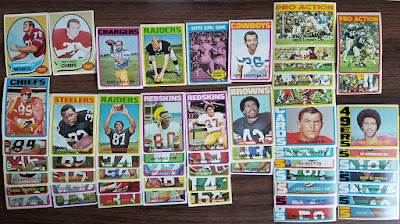 Put a hurtin' on my football wants from one dealer that had '72 thru '74 for 20¢ each.  Knocked out half my list right up to where the high numbers start.  Also got two '70s upgrades.

Caught a couple of these '71 game inserts, including the slightly stained Johnny U. 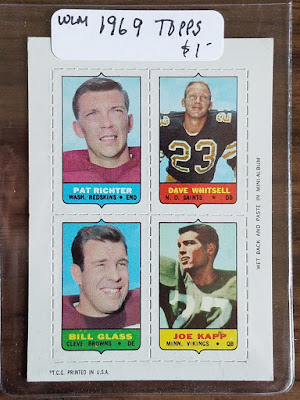 And a rare four panel stamp for my Redskins collection.  Surprised it was so cheap.  There are little booklets you could put the separate stamps into for each team.   These aren't coming apart any time soon. 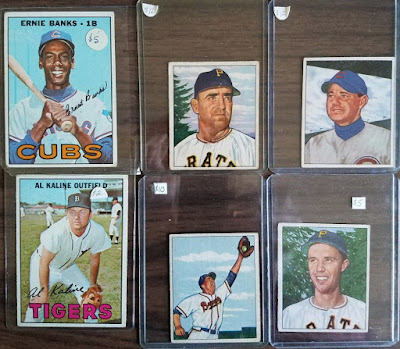 And finally, to some quality vintage baseball.  The '50 Bowmans are mostly lower numbers that are the rarer ones in that set.  $12 is usually about double what I pay for these most of the time, but for the rare ones, I'll bite.  Stay tuned to the next post for more that were priced the other direction.

The Banks and Kaline were impulse buys for my star binder.  I have no plans on starting a '67 set.  But for $7 for the pair, I couldn't leave them behind.  Banks may have one doinked corner, and Kaline has a subtle crease that starts at the R in Tigers and goes to his hip, but you'll never notice them in the book.

Overall, a good show, but it ended just a bit too soon.  I got there close to 10 AM I think, and they started packing up after 3.  Not sure if I missed much, but I think I did fairly well.  And, I still had another bigger show the next day!
Posted by GCA at 11:44 PM
Labels: excuse to show pretty girl, favorite sets, hockey, oddballs, old stuff, pimpin' ain't easy, player collections, set killers, show loot, upgrades