The next leg of the trip was more a return home than another venture into unknown lands.  We got stuck in Nashville after our shop visit, so the trip back to Michigan was made overnight with only brief stops.  Sunday was basically lost to travel and fatigue.  We got up Monday with no planned journey farther than Stuart's family home - a few blocks from his apartment. 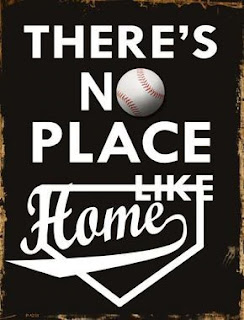 I've probably visited him six or eight times since 2009, the year before the National was in Baltimore - an hour from my house.  We had been talking on the phone about cards for months, but hadn't met in person.  We figured it was a good idea to make sure neither of us was a psycho before committing to going to the convention the next year. 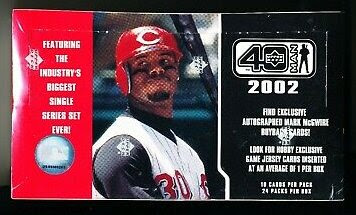 He likes to tell the story that we first contacted each other over a box of 2002 Upper Deck 40-Man for sale on eBay in 2007.  Stuart won the box, so I emailed him to see if we could trade singles from the set.  He responded, but I never got the message - must have gone to my spam box.  Then about a year later, he posted on Sports Card Forum about building the set.  I answered and sent my remaining wants.  He still had a stack pulled from the first communication that he realized matched my list, and figured out I was the same guy that bid on the eBay box so long ago.  This started a free-form exchange of cards between us that continues to this day.   We just send anything from PWE's to two-row shoeboxes (and bigger if we deliver them on visits.) all the time without really matching up each transaction. We've been back and forth to Michigan or Maryland pretty much each year thereafter.

So as we were climbing through some of his collection (literally), and finding binders and boxes to put away some of the singles he had picked up on our trip, he pulled out some things for me to take home. 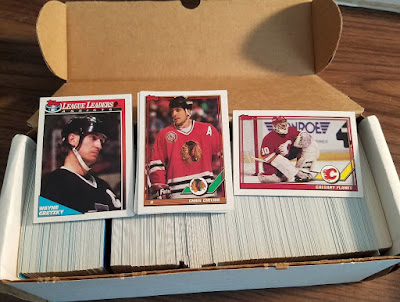 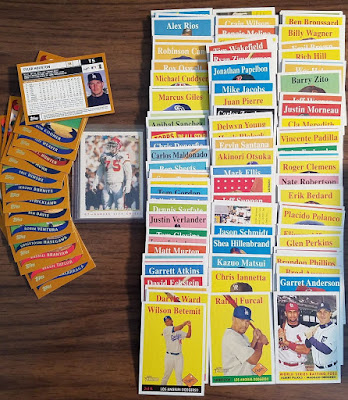 Some 2002 Traded and 2007 Heritage singles to potentially knock off some numbers on my current wants.  Didn't end up needing many of these, so they're available... 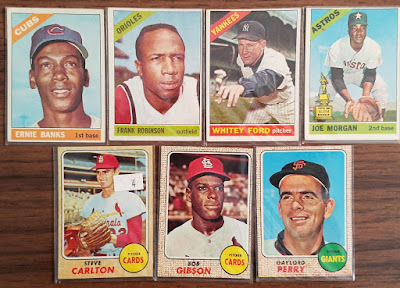 And some nice vintage stars!  Really shocked me with these!  Sorry, these are not up for trade.  The 66's will go in my star binder and the 68's to my set build.

Thanks to Stuart, who is always glad to thin out the hoard a little.  Look him up on Sports Card Forum as BseballCommish75.

Next time...on to the Warehouse!