This is the first in what should be a long series of posts to generate trades out of the 15 monster box hoard that I purchased this past fall.  I will be dividing the stock by product and showing what is available in as much detail as I can without counting, scanning or typing out every card. 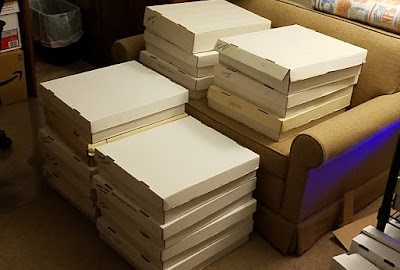 I will accept trades first and foremost.  And with the total cost being what it was, I will NOT be demanding equal value for each and every card offered, especially base cards.  The goal is to move enough volume and not replace it with the same volume to my collection, while still recovering enough value to make it worthwhile for each of us.  Hopefully, I can get some nice cards out to you for less than normal return, but still get some higher value items for myself.

Team and player collectors rejoice!  I can fill large lots for starters or go from want lists to fill your needs.  I'll be posting lists of star players that I know appear in large quantity across products and years at a later time.  After you see a few posts about the stuff I have, you might have a better idea that I can hit a lot of what you lack for your team or player(s).

One caveat I should mention.  There may be a limited number of low serial numbered parallels or scarce inserts that may or may not appear in these posts which may get sent off to COMC to recover some of my initial purchase.  I'll try to reserve those after all trading is done.

I will also accept cash and will price cards well below guide and try also to get under current market pricing, which I define as eBay and COMC.  Sales will always be secondary to trades, but if you don't have anything for me and can really use some of the hoard stuff, I can deal.

There were six boxes of baseball, which I've gone through and put in order by year and product, and consolidated most of my extras with them.  The bulk of the products are from 2000 to roughly 2008.  There are a few newer batches too, and one box of older stuff.

Ironically, the first offering will be from the other part of the lot - the football.  The football hasn't been sorted through yet, but seems to be from about 2010 to 2017 or so.  I had been jonesing to go through the largest single product lot for a while and finally did it last week.

I have (what's left of) four and a half rows in a 5000 count box of 2015 Score football cards.  This pic was taken after I got what I wanted out of the box, so this is the true quantity available. 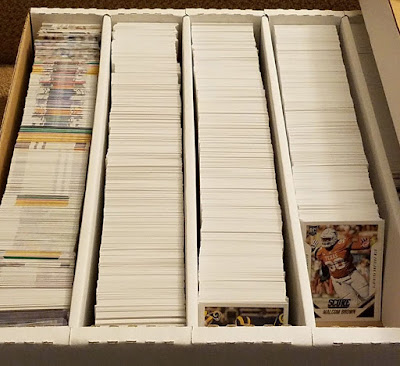 This is the base design... 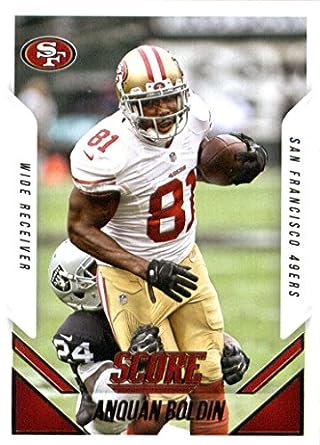 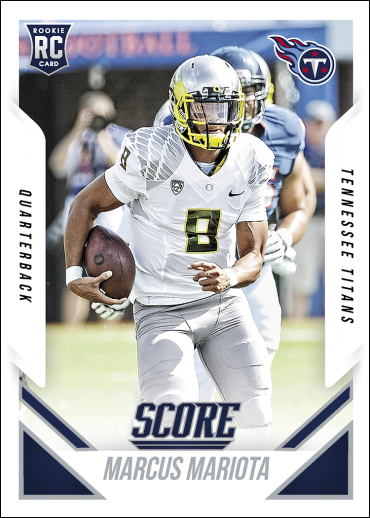 White borders, team colors, tons of rookies at the end.  440 cards in the base set.  I have most every one available except Tom Brady and any Ravens.  Also missing a couple of the big rookies like Mariota here, Winston, Stefon Diggs and Todd Gurley.

Also have a couple of the short print photo variations in both plain and parallel camo patterns.  Inquire within.  Have these parallels of regular cards as well... 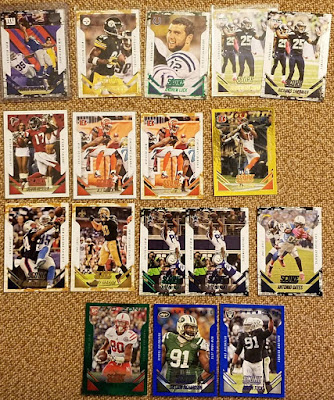 That green one on the bottom row is serial numbered 2/6.  That row may go to COMC unless someone really needs those particular guys.

Some nice players in these Scorecard parallels.  Pardon the glary picture. 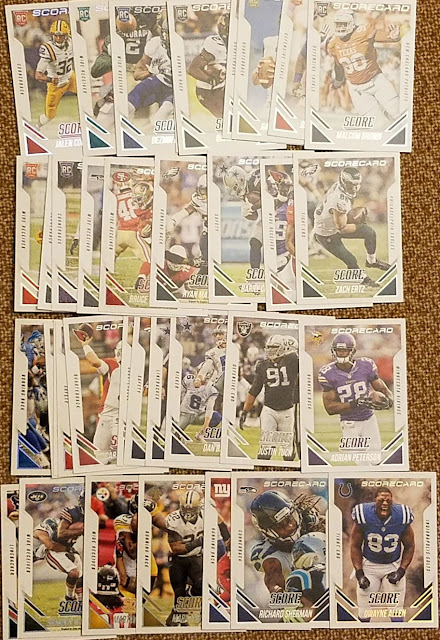 But the best stuff to me is in the inserts.  The majority of the insert sets come in regular, yellow, red, green and black bordered parallels too.  I am building sets of some of the yellows and reds, but the remainders are available. 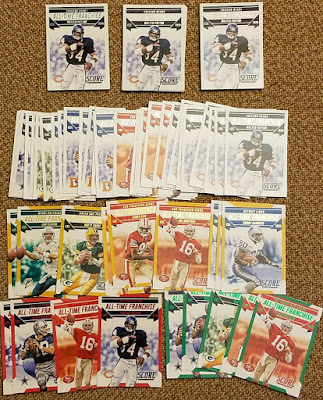 The stacks above these All-Time Franchise singles are complete eight card sets. 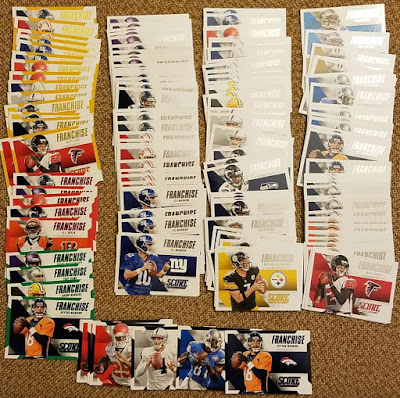 The horizontal Franchise inserts are nice too.  Yes, I've taken out one of each of the yellows and reds on these too, and still have all this left. 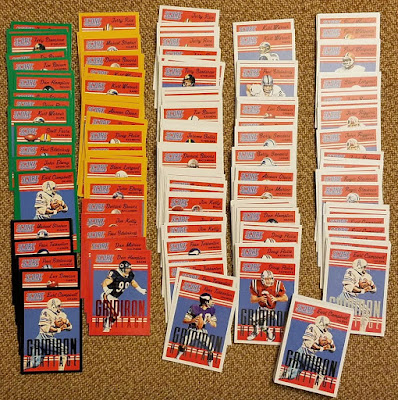 The Gridiron Heritage set has a diverse lineup.  HOF'ers and guys like Dan Hampton and Doug Flutie too.  One complete set of 25 available. 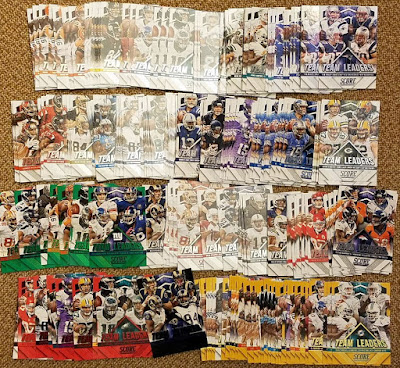 They separated the Team Leader cards from the base set.  I could make multiple sets if I wasn't short Ravens and a couple others.  The Raiders have the coloring on the lettering and stripes instead of the corners and edges of the card.  A strange quirk. 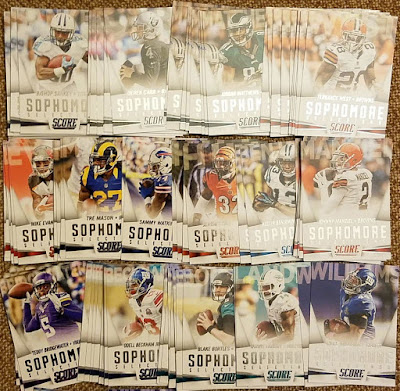 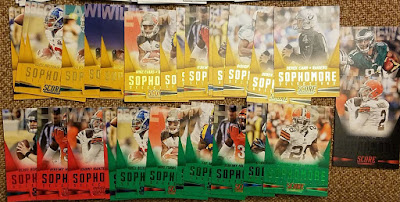 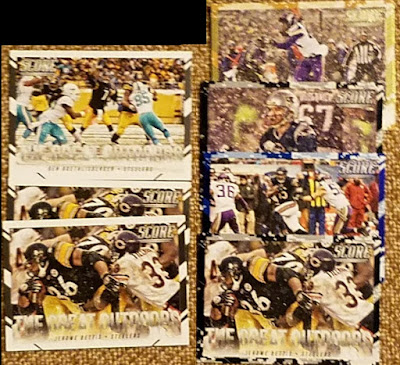 The Great Outdoors are a little scarcer.  Only three regular dupes.  And these come in the camo pattern parallels instead of the primary colors.  Steeler fans?  Sorry about the blurry shot. 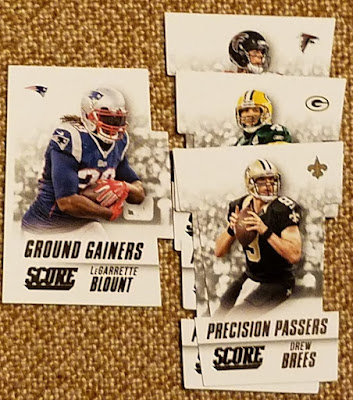 Also a bit harder to come by, these die cut trifectas - Ground Gainers, Precision Passers, and Playmakers (no dupes), are die-cut threesomes of RBs, QBs, and receivers on the same team.  There are 18 sets in the complete run. 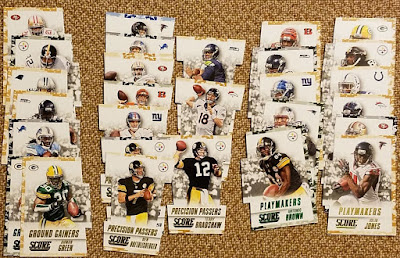 The parallels give you a better idea of the player selections.  Some of these may go off for sale.

So anyone want to jump in?  Let me know what you need.  And keep an eye out for the next Dispersing The Hoard Post.  It won't be such a huge lot, but may be a product more to your liking on the baseball side.
Posted by GCA at 7:48 AM
Labels: Big batches, blogger trades, Disperse the Hoard, duplicates, My stuff, parallels, pimpin' ain't easy, trade bait, Whatcha Need?