Blog Bat Around: Favorite Set Of The Decade

Billy Kingsley of Cardboard History put up another Bat Around asking for a post and some scans of your favorite set of the entire 2010's decade.

Baseball is the only sport that I could make this list for, since my set wants for football have been sporadic since about 2016, except for the AAF, and hockey has been limited to one set per year since 2013.

I went through the Database listings for each year 2010 thru 2019 and picked out the ones that I remember enjoying the most.  The biggest factors were base design, insert creativity and collectibility, which I loosely define as ease of completion and availability of all the base cards (+SPs) and inserts (hobby and retail).

You'll notice I don't have any of the Topps flagship sets in my countdown.  I'll do a ranking of those later, but the designs never impress me more than the others listed here, and the increasing bloat and repetitiveness keeps them all in the lower ranks among all products.

Honorable mentions to these products that just fell short. 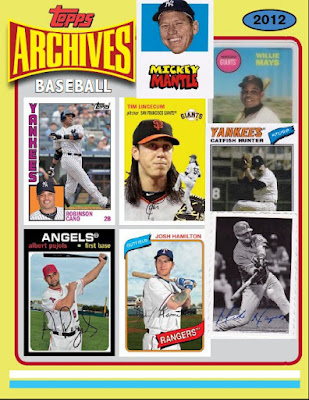 The first Archives set is also the last Archives set I've done.  As I've said, it overlaps with Heritage and the annual nostalgic tribute in flagship.  The Archives inserts were fresh and really cool to see.  They hadn't corrupted the short prints yet, and the fan favorite player selection was a plus. 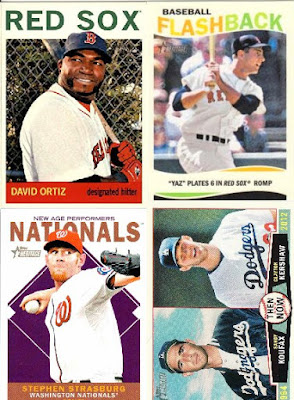 Heritage has followed the same pattern since it was established in 2001.  Same inserts year after year, which can get tedious.  And the short prints stay on your want lists seemingly forever.  But in 2013, I managed to finish the whole thing in only a little more than a season.  And it probably lead to my pursuit of the actual 1964 set that it honors.  Except for the appearance of some of my current and former Orioles and Nats heroes, the 2013 inserts aren't that memorable.  But it's the clean base design and fact that I finished it that earns my fondness.  Looking forward to jumping back in with 2020.

And now the countdown....This one goes to Eleven. 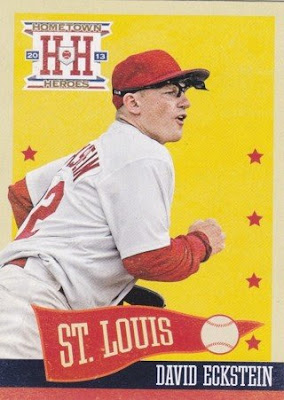 I really liked these when they came out, and still love to knock off the remaining inserts I have left.  I see big piles of this stuff at the National every year for decently cheap, but have only bought once.  Can't justify that much duplication at this point.

Nice selection of players, and the inserts are interesting.  These get points off for the obvious lack of logos, and the insert parallels are a pain in the tuchus when they mock you for not being the plain version you're still looking for.  Plus, the short printed base at the end will take forever to find at reasonable prices. 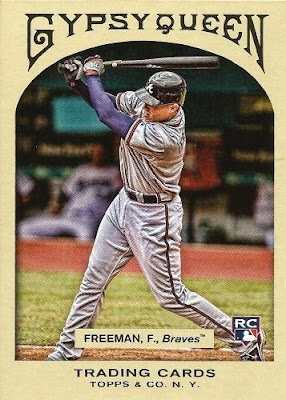 These wowed when they first appeared.  The base design actually got fancier as the years went along, but I like these and 2012 the best.  Topps went off the deep end starting in 2017 and they've looked hideous ever since.  But the premiere set was great.  They had the same SP scheme as A&G (301 thru 350, and not really scarce).  The inserts were nicely retro, while staying close to the "depict the star players" philosophy that is Topps' default.  The Framed Green parallels were a distinct classy touch.  And everyone digs the minis.  I'm not fond of the mini parallel inserts though. 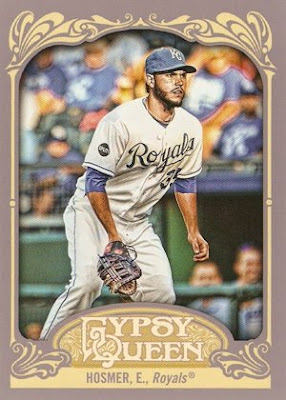 The next incarnation of GQ scores at a similar level, but what it gained in style points, it loses in SP penalties, scattering them among the base set.  Inserts basically mimiced the initial offerings, as did the minis.  I committed to assembling the black minis myself, a task which took eight years to pass the halfway mark.  Also still looking for a few of the big name framed blues. 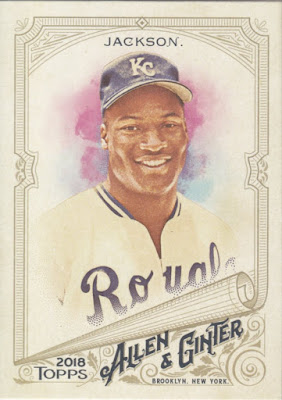 A&G appears on my list four times.  I can really relate to collectors who put Ginter together every year, and consider the flagship optional.  All four A&G sets could have been run together, since they carry the same high level of design and insert quality.  But this way, I'll separate them with the finer points.

The scroll thingy below the picture isn't my favorite, but doesn't intrude on the photo enough to subtract points.  The framing and frilly outer design is A&G's trademark, and works well here.  Of the four A&G sets I like/collected, 2018 has the best selection of insert concepts of any set in the countdown.  They knocked it out of the park with the baseball equipment, superstitions, moons, flags, fears, Native Americans, etc.  The diversity is outstanding, and though they contain a couple 50 card series, as has been the pattern lately, they're not overwhelming to assemble in a reasonable time. 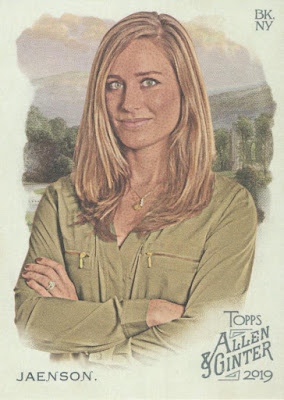 Right behind it's predecessor, 2019 Ginter improves the base design by going a bit more subtle but still full frame, and continues high marks in insert quality and numbers.  History of Flight, Collectible Canines, and Star Signs stand out this time.  There are some retail exclusives that I haven't come across at all yet.  And the biggest gaffe is numbering the short print base starting at 351 instead of 301 where the base set ends. 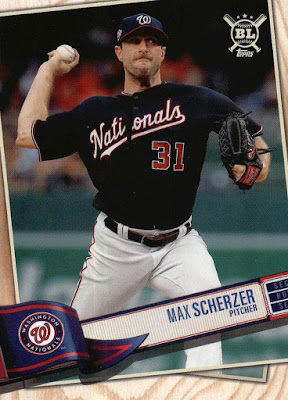 This one is probably ranked a bit too high on here, but that's where the scores landed it in my analysis.  It got bumped up for several features that you don't see very often in the same product - no shortprints, unique insert concepts ~ most of which were executed in 30 cards or less, and there were only five of them.  The only point deducted was for the Ballpark Oddities set, which is a great idea, just a retail exclusive that I haven't found.  The base design is an improvement from the first year, but still tweaks my OCD with the crooked photo. But since it's masked by the pennant and name plate, I can get past it. 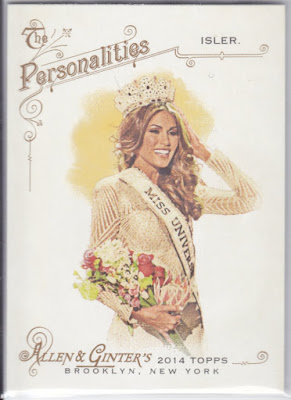 Back on the Ginter bandwagon, this is where I jumped on.  After 2014, I started hitting the new A&G's pretty much each even numbered year, and then (with the help of a couple big  boosts), started filling in the older sets too.

2014 base design is one of the greatest, only limited by how much the picture is contained inside all the frilly framework.  And the name is a bit stranded in the top corner.  But overall, I loved the look, especially since they took it to another level over the 2010 thru 2013 "frame lines with the centered bottom text" pattern.

The inserts carry on the tradition of diversity and imagination.  The Pastime's Pastime set is huge, but the blue foundation may evoke a prelude to the X sets to come.  An additional boost was earned by the binders that were issued along with the exclusive inserts (that were still available cheap years later, thank goodness). 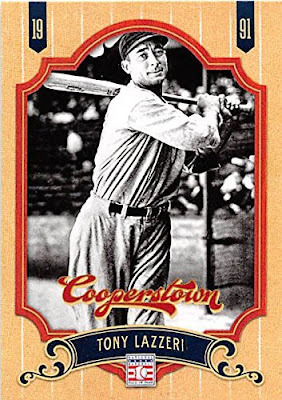 A set composed of nothing but Hall Of Famers, and inserts about not only the members and their artifacts and lives, but the Hall itself, including the surrounding community - Hell Yes Please!  The fact that it's logoless is only evident by the cropping of the photos.  A few colorized short prints, and some very scarce wood-like inserts are the only factors that keep this one from being even higher - and maybe more popular.  Too bad it's so much trouble to do sets like this now.  We want more! 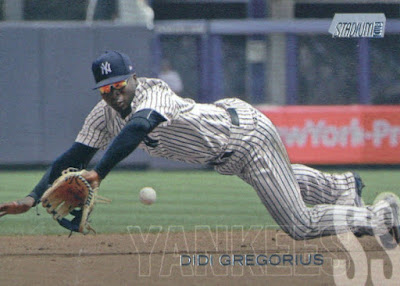 Stadium Club is lauded annually for its spectacular photography choices.  And they're getting better at coming up with designs that don't mask those pictures.  2018 was the best example of this so far.  I waited since 2014's resurrection of the brand for a design that wasn't so close to the old Ultra fonts from the late 90's.  I pounced on 2018 and found a nice quantity of parallels and inserts in the hobby boxes that wasn't so minimal as to make building the set into an insurmountable task.  Some of the SC inserts are always throwbacks to their ancestors, but the others are decently distinctive compared to the basic star parade that happens in flagship Topps.  The parallel inserts can throw you off a bit, but aren't as intrusive as they could be.  I think Topps has hit their stride with Stadium Club for many years to come. 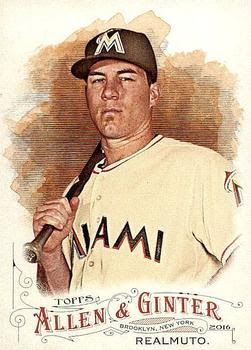 The "ultimate" A&G set happened in 2016.  Or at least the culmination of a fantastic base design with great picks of inserts at the same time.  I liked them so much I even sought out a deal on the blackout "X" version of the set.  This puts 2016 over the top after still scoring consistently with inserts like Mascots, "mini kitties", and mayors.  I even just finished the oversize box loaders for the only year ever.  The one glitch is the super-scarce mini Skippers, which brought back manager cards, but then made them impossible for anyone to actually collect.  (Fix that please! Either in Heritage or here!) 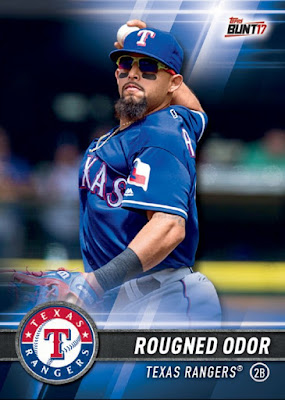 Yeah, I'm kinda shocked too.  I thought it would be A&G on top, but if you put it all together, BUNT's second year scores the highest in all my criteria.  Base design is awesome ~ clean, sharp, colorful, has logos and all the info right up front.  Card numbers are kinda small on the back, but that didn't count against them.  200 card set.  No short prints!  Unique inserts - though they came in parallels and had exclusives that you can't find and are basically star parades - were graphically so much more distinctive than anything else so they're cool anyway.  (The Programs are even more unique).  And none bigger than 25 cards.  Plus a collectable parallel set that was basically one-per-pack!  Thank You Topps!  (Of course, it was immediately discontinued, but evolved into Big League.)

Like I mentioned at the start, I'm sure a lot of you expected Topps flagship to show up at least once or twice.  But all I can say is, flagship is the basic standard, and all these are at a level or two above that.  Stay tuned for my flagship rankings.  Also, I'm sure there are those who have Bowman or Donruss in their lists too.  Not happening here.  Maybe Diamond Kings or Chronicles down the line, but they have to step it up a bit first.
Posted by GCA at 8:00 AM
Labels: Blog Bat Around, favorite sets, review