Flooded From The Pacific - An Epic Pack Rip(tide)

Found some old pictures on my computer when I was searching for some others.  They loosely document the results of an eBay auction I won in conjunction with my main trading buddy.  It was not a formal case, but a massive lot of 1994 Pacific baseball.

This was back in the summer of 2008.  We saw the auction and figured neither of us had any, and it was relatively cheap,  we decided to pull the trigger.  I don't remember what the exact purchase price was, and eBay appears to only have records back thru the last couple years.  We had them shipped to me so I was the one that got to open them this time.  I thought that would be great fun.  It was...to a point.  Towards the end I vaguely remember just wanting to be done.

Here's what the box looked like.  My picture file is named Session 1 Box 2, so there may have been two of these. 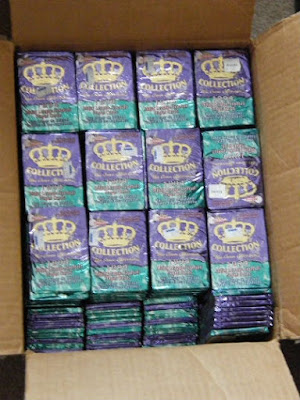 I cleared my sorting desk and started laying out piles by number.  1994 Pacific Crown Collection is 660 cards with five insert sets.  So that means single digits, tens, twenties, thirties, etc. out to 90's, and then repeat in the next row for the 100's, and so on down to 650's. 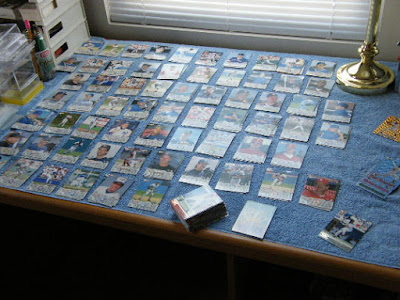 Every now and then I'd hit an insert and set it off to the side.  The most common ones were the Prisms.  These are really nice looking, even compared to their Circular retail counterparts.  Prisms come in gold and silver.  Here are the first few to come out. 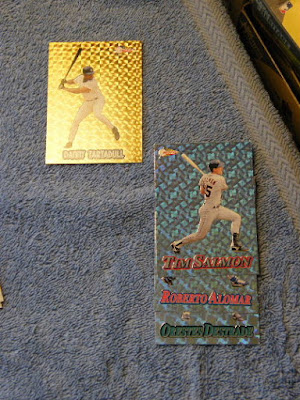 I apparently needed two sessions to bust all the packs.  The dates of the photos would lead one to believe it took me two months (05 July to early September, with one group in between in early August), but I don't think that's correct.  But they did occupy the desk for a while.

The progression of the piles! 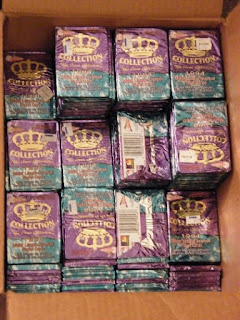 The box is dwindling!

The inserts started piling up too!  A few of the All-Latino Team showed up too... 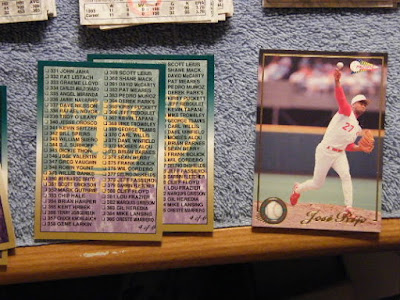 ...as well as the most elusive part of this set - the checklists!  Anyone who has this set on their want lists has the checklists on there.  I got pairs of a couple of them, but may have only pulled one full set of four ... which somehow I didn't end up with! 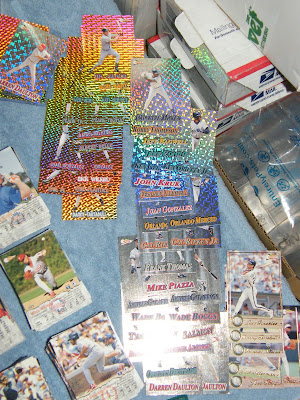 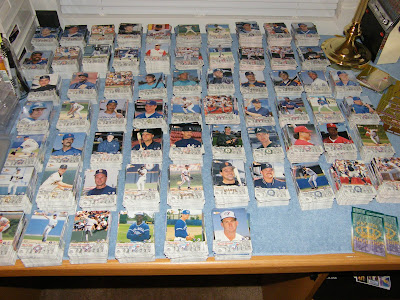 Until finally ... the last few packs come out of the box(es?). 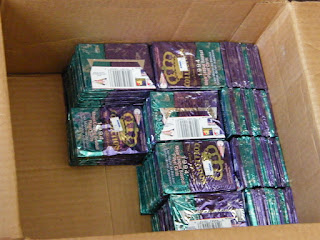 The light at the end of the proverbial purple and teal tunnel! 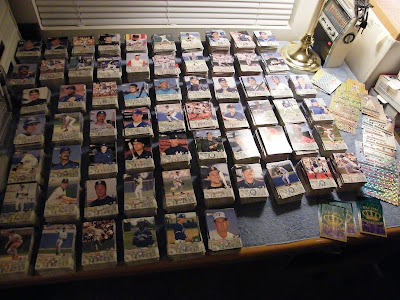 Along the way, there were some that were stubbornly stuck.  A great many of them came out with the "snowflake" effect I showed in a previous post.  There were so many duplicates that I was able to find enough decent ones to make two complete base sets and still have a three row monster box of what was left.

I've since only found a couple of the inserts in the wild.  I kept the printout I made of these in my list binder for several years before posting them to my wants website.  They will be there for a long time, I suspect.

Team collectors, player collectors from the early 90s, and set builders who don't mind some occasional minor flaws, hit me up!
Posted by GCA at 8:00 AM