P-Town Tom hit me again with some hits to my (newly expanded) 1991 Topps error want list.  Some of these are kinda obscure, so I'll show you the differences - the a and b versions. 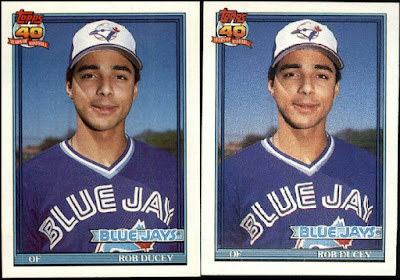 #101 Ducey - (® far away from Blue Jays).  This variation occurs several times in the set.  The "circle-R" or registration mark, is printed high and tight against the last letter in the logo, or is mid-line and a little farther away. 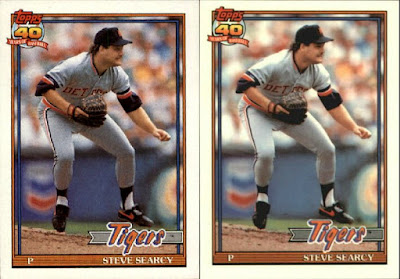 Here it is again with #369 Searcy - this time it's the "TM" mark.  There is no official listing for some of these, so it's hard to judge which one is A and B. 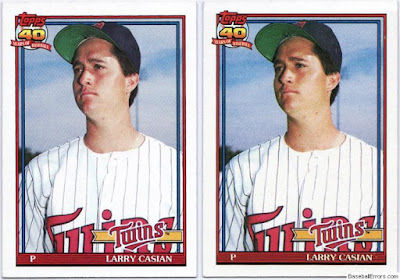 #374 Casain - (facial blemishes present & airbrushed).  Mr Casian must have been right out of school, and apparently had some complexion issues that they cleaned up for him in the first card photo.  The picture has the corrected card first. 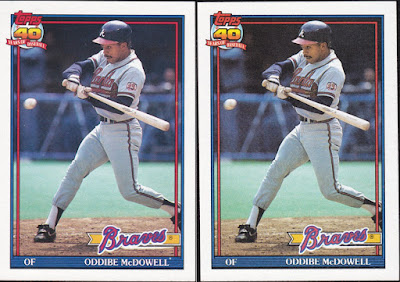 #533 McDowell - (no period / spot after name).  Couldn't find a scan on the internet for this one, so I had to make one.  The little spot printed at the end of the name disappears in later versions.  Would hesitate to call it a "period" since it doesn't sit on the line like a printed character, and the black stripe goes right through it.  Interesting that there is what looks like a hair on the plate - a thin line through the team name and name stripe - that remains on both cards.

#573 Rich Rodriguez  blue mark on shoulder - natural/blue glove laces.  This one has a C version.  There is a small blue print mark on the first one at his shoulder above the glove.  Then the mark is gone, but the edges of the glove laces turn bright blue.  The final variation corrects both. 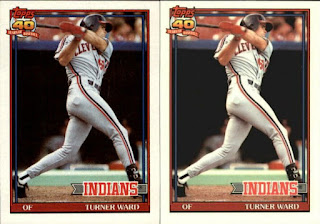 #555 Ward - (gap in top black border).  They've been doing this since 1973.  Pro Set was the champs, though.  Just a small gap in the very top black line right about the black splotch in the crowd. 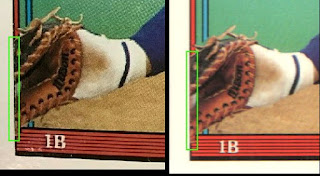 #610 Galarragga - (white space between glove and border).  Andres has a nice horizontal card in '91, but the overlapping photo gets a little messy until they clean it up. I added the green highlight. 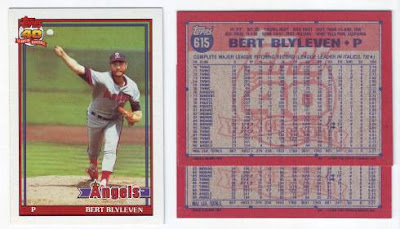 #615 Blyleven - (MAJ LEA Totals fill space to border).  Courtesy Junk Wax Gems.  Most cards have the copyright line inside the border, but Bert's stats are so long, it got pushed outside. 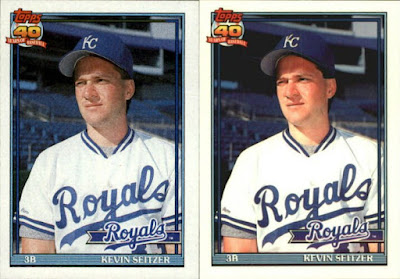 #695 Seitzer - (green top border).  There are a few of these in the '91 set too.  I don't know if it's a color processing problem, or just a mistake by the guy behind the Photoshop controls.  The scan makes it look dark grey, but the first one is a nice forest green on the top inside border stripe.

Thanks to Tom again, and I hear there are more coming!  That guy is one of my best trading buddies.