I took the same route jumping into 2020 Topps Series 1 as I did for 2019 Update.  Bought one Jumbo box from Charm City Cards.  It's so nice to have a dealer about an hour away - I ordered on Thursday afternoon (don't tell the boss) and it showed up Friday.

Won't show the base cards, since you can see them multiple places these days.  I'm confident that I'll get a complete series out of the box.  It's been proven true by the reports I've seen so far.  One trader said they were one card short, and then found a few laying on the floor including the missing culprit. 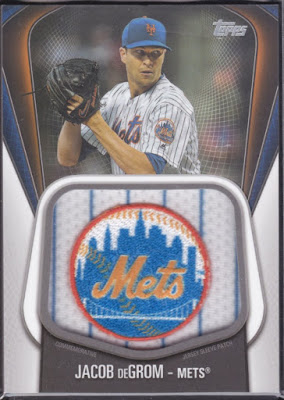 Ha! Fooled ya!  While this is counted as one of the hits in the box, it's a manufactured "Sleeve patch" which should NEVER be classified as a "relic".  Hey, decent looking card item, but doesn't count as a "hit". 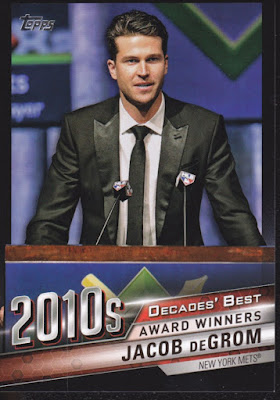 deGrom hot box!  Black parallel insert.  Looks a little better than the plain one Night Owl got, but it's so dark it looks like it would fit in with this year's Heritage.  Parallel inserts are almost as annoying as fake hits, in that all they are is an insert you didn't actually get if you're trying to build them all. 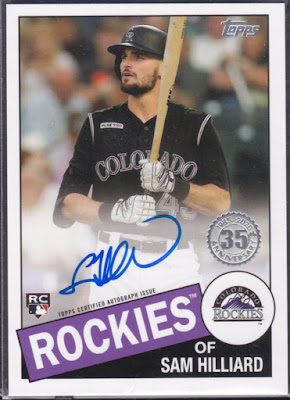 Now this is an actual "hit".  Of course, it's a Rockie Rookie (hey that's fun to say) that I've never heard of, so it's trade bait.  Nice looking card with the team color theme throughout though.

But all was not lost: 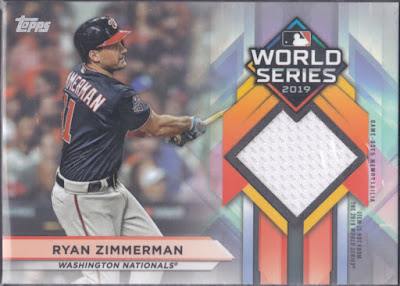 YESSS!!!  I'm all in on the Nationals World Series championship stuff.  I want all the parallels to all the World Series Highlight base cards.  Never figured I'd get lucky enough to pull a jersey of them too, so I'm really happy about this, white swatch and all.  Although when I looked closer, it says right on it "Item is not from the 2019 World Series".  *sigh*  Even Topps can't find the blue jerseys from the Postseason. 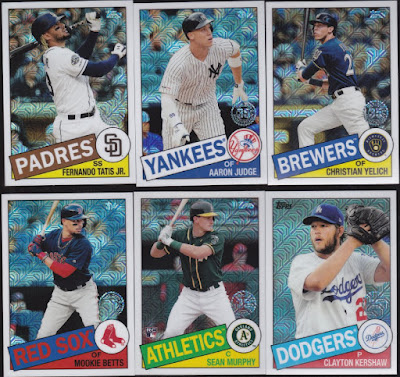 Anyway, on to the shiny.  Actually got two silver packs (which were blue wrappers) in the box basically unannounced.  Pulled some nice names. 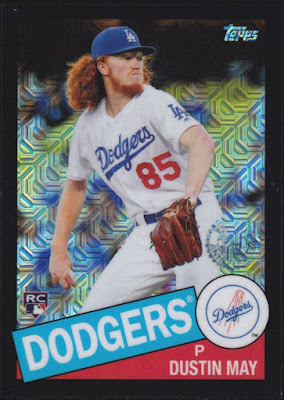 Got this guy too.  Night Owl loves his Turkey Red insert, which is arguably the same photo with the crowd left in the blurred background.  Well, he and Clayton above are going to Night Owl so he can enjoy this one too.  All I can think of is "Get a haircut!" 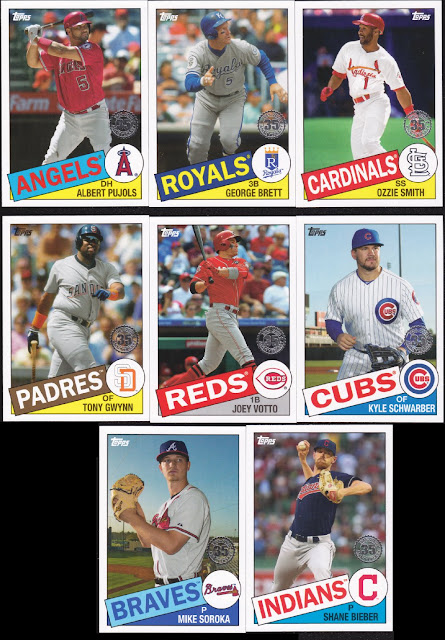 As for the regular '85s, I did pretty well pulling names again.  Not that I'll be after these though.  I used to dismiss the 1985 design and pure junk wax, but it's a lot cleaner than most during that time.  It's kinda grown on me.  But not enough to pursue 250 of them. 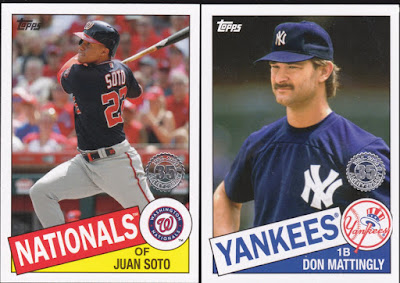 I might add the Nationals team set from these to the WS cards.  So both of these are keepers.  Matty is for another collector I know who just gathers his cards.

The Decade's Best are the one large set I might go after this time.  At least all the "award winners", "batters", "teams" and things are all in the same series.

I'm aware the insert ratios have dropped through the floor in the last couple years, so I'm only sort of OK with pulling six of these from one jumbo box, but only managed two different decades' subjects.  Not a big problem, but would have been nice to see a mixture of the eras.  That Astros card may cause a bit of controversy these days.  Anyone see the interview with AJ Hinch on MLB? 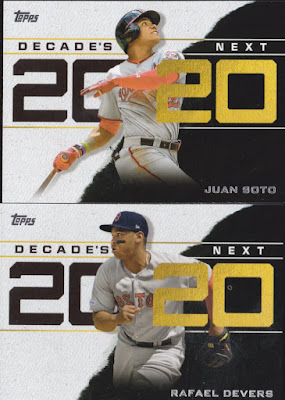 These aren't bad either, and they're only 30 cards big.  Will keep Soto either way.  Already have a request for Devers, but I'll have to see how easy they are to trade for first. 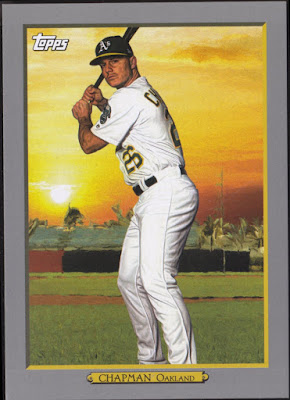 Here is my slightly oversize (3¼" x 4½") box topper Turkey Red.  At first rip, I thought I got Aroldis Chapman, but it's Matt.  Can't say I'm too familiar.  Are you interested, Fuji? 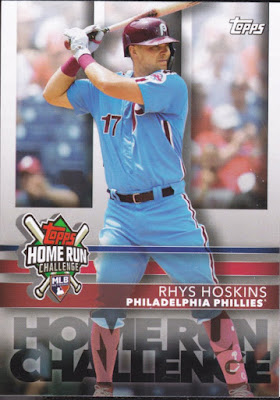 Got one of the contest cards with Mr. Retail Highlight insert set Hoskins.  Cool looking card with the layers and the throwback uni.  I can pair this with the four HHL's I got in the hanger boxes earlier for anyone who's a fan. 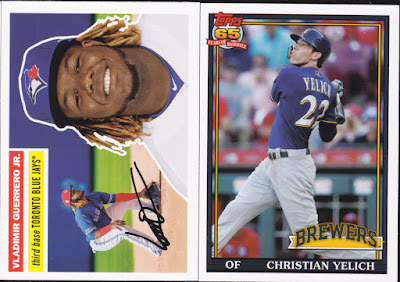 Topps Choice.  Which apparently means Topps chooses to reprint current players on an old design for a FOURTH incarnation.  I've run this point into the ground, but again, isn't Heritage, Archives, and this year's '85 tribute set enough?  Nope, must have a generic reprint insert set every year too. 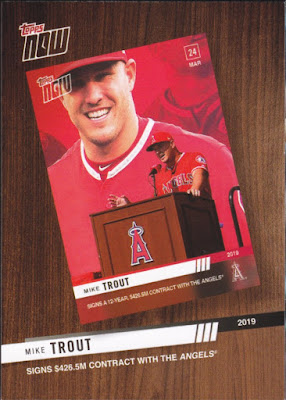 Not to be outdone in it's uselessness, here is card #1 of the Topps NOW review inserts.  They basically say, "Here's what you missed out on, and have no chance to ever get cheaply again." 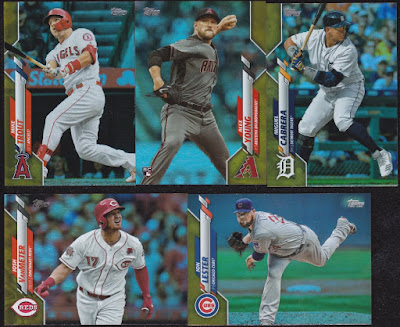 Now, the parallels.  These are the gold foils that are exclusive to jumbo boxes.  I pulled a couple of these in the first few packs and thought they might be the new incarnation of the golds, just shiny now.  But nope, these are a new flavor.  They actually look pretty nice - better than they scan.  The gold looks like gold and the blue tint isn't really there.  More in a moment... 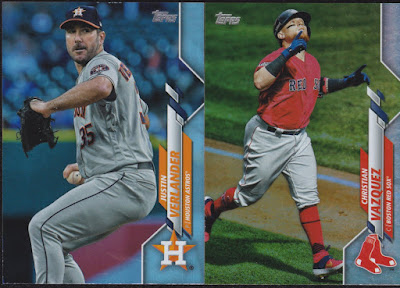 These are the regular foils.  Astros and Sawx, par for the course.  If it was against just about any other team, I'd have felt bad for Verlander losing another postseason. 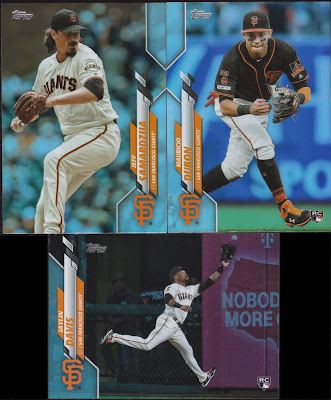 The rest of the foils were all Giants.  I can see why they might make a lot of the playoff teams, but the Giants?  Guess it's just luck of the draw.  Are you still around ArpSmith?  I got the regular Davis horizontal in the previous pack. 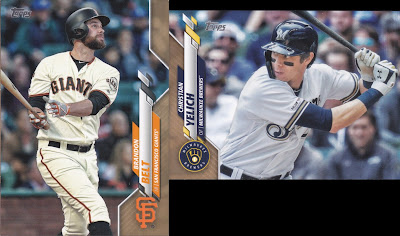 These are the regular "golds".  Again with the Giants.  Yelich isn't a bad pull.  Could package this one, the Choice '91, and the shiny '85.  But look at these closer.  The "gold" is really a tan color.  The scan is actually accurate and unaltered.  Somebody got some chocolate in the peanut butter.

So that's all that came out.  You'll hear about it if I don't get a whole base set, but I probably will.  And there's a good stack of dupes, especially since the whole base contents of two hangers will be added to them.  Happy trading and let me know what you need here.
Posted by GCA at 7:20 PM
Labels: box break, commentary, mojo hits, parallels, ripping wax, set bloat, the whole thing at once, trade bait, Whatcha Need?