The default method is the regular white box.  Unless it's a vintage set, or one that I really love the design, it generally goes in a box.  At least until it's close enough to completion to be put in sheets without too many holes.  Makes it easier to sheet up if you're not compensating for missing cards three or four times a page.

But it's not just about dropping the cards in the box.  You have to do it efficiently, right?

I'll put the set (starter or whatever) in the box with the numbers facing so I can read them.  This makes filing individual cards possible without necessarily pulling chunks of the set out of the box. 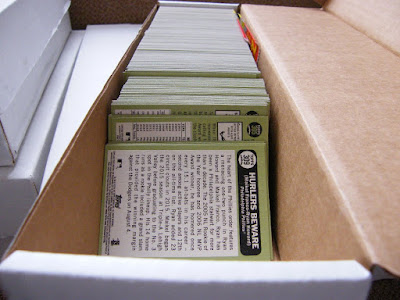 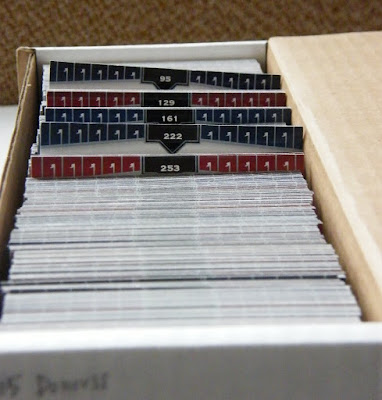 Then if there is extra space, I'll fill it in with pieces of packing foam. If I've opened packs of the set, I'll include two of the wrappers that didn't get too torn up upon opening. 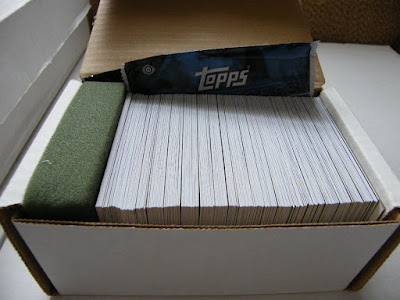 I'm lucky enough to work in a place that yields a lot of storage material, from free binders to lots of different size packing foam.  So I have a variety of thicknesses available all the time. 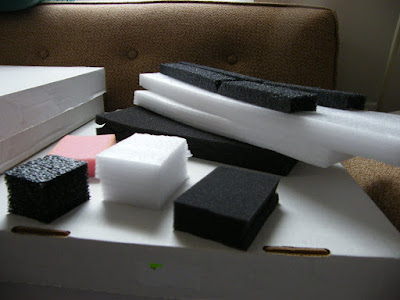 And don't forget your ad cards at each end to protect the first and last cards.  Those pesky things are good for something! 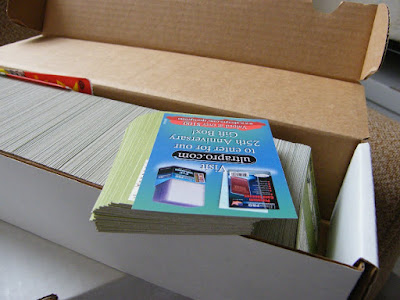 Then I mark the end of the box to identify the set within.  I use pencil so I can transfer cards into different size boxes and relabel them without making a mess or having to print labels or something.  I do like it when I have more graphical labels or wax box panels to put on there, but it doesn't happen often.  And I'll usually start the set out in a box that fits pretty close, even though I may only have half the set.  Later, as it fills up, I'll move up to the next size box. 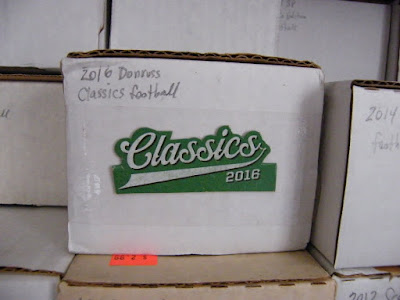 Now for some random reason, I label single row boxes in the upper left of the end, and bigger boxes in the lower right, mostly to avoid the lid covering the labeling.  I'm not picky about which end I use to write on in relation to the flaps.  Some will open to the left and some to the right.  Often the choice is made by seeing which end has the least tape or markings on it. 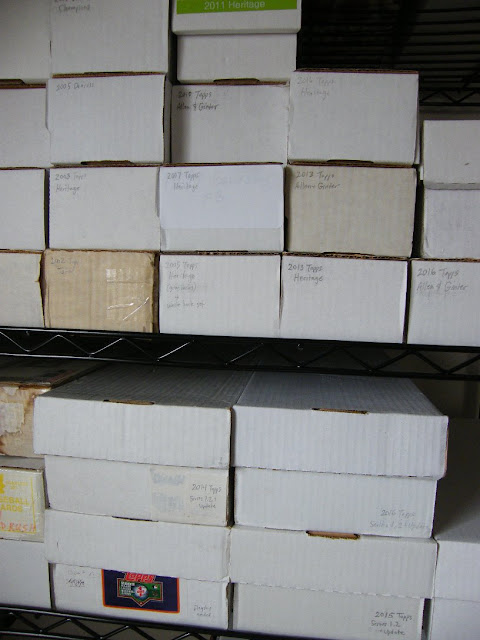 Most of my active sets in smaller boxes are in the cabinet stacked by size for easy handling.  The bigger ones are on the wire shelf rack (pictured above) and roughly stacked by year left to right.  Double row shoeboxes just kinda go where they can, since combining them with single row ones doesn't make it easy to get them in and out of the shelves.  I recently had to raise the top shelf on this rack to allow four single row boxes in a stack instead of three.  Even then, I've only got room for a couple more there.  I'm going to have to thin the herd of the 3- to 5-row boxes of dupes below them to make room for any more sets in long boxes.

But anyway, not much of anything innovative here, just my thought process when storing cards in white boxes.  Next time in Collecting and Storage 101, we'll talk about binders maybe?  Until then, Happy Trading!
Posted by GCA at 8:00 AM
Labels: collecting quirks, My stuff, OCD