Here are basic step by step directions on how to make a custom card from images of existing cards.  I'll get into more complex designing later.

In this tutorial, I'll be making a custom Priest Holmes Kansas City Chiefs card in the style of the 1965 Topps "tall boy" set.  It's a nice, simple design that lends well to custom fabrication.

Start with a few good examples of the cards from the same or similar team, especially if the set follows a consistent color scheme for each team. 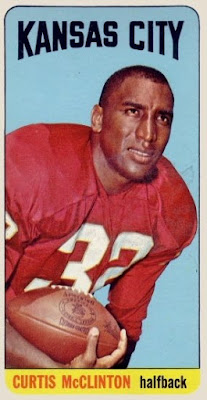 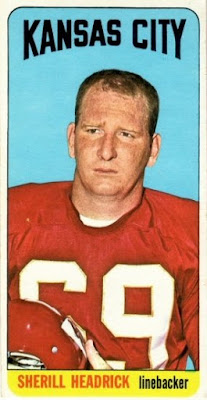 eBay is one of the best sources of images.  They are usually relatively large, and dealers with a lot of singles will often scan them all the same size and brightness.  This makes it easier to use elements from multiple images and have them look consistent.  Cuts down on the editing time.

So we can eliminate the other player's photos from the custom card.  I make copies of the image at each stage and save them along the way so if I mess up, I can go back and open a previous file and start from there again.
Basically you just erase the picture and replace it with the background color.  My Paint Shop program does this pretty automatically.  You just select the part of the image you don't want and delete it. 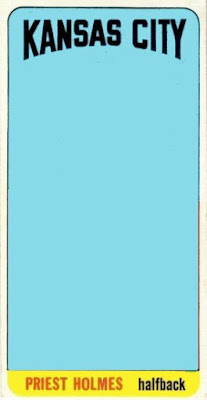 The blank card image also shows the name that I culled from the original images.  Looks something like this:

First I expand the yellow background so I can build the name on it.  Then I figure out which letters are present and go find the missing ones, or create them from what's there.  I pasted the T from Clinton's image to the end of Headrick's name.  Then made a P out of the R.  Also had to get the O from the other image.  Pieced the name together in order and then placed it on the new frame with McDonald's position. 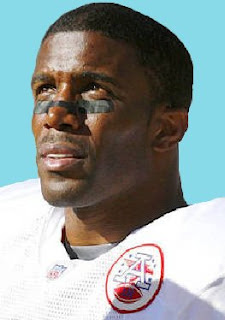 Then all we need to do is incorporate a picture of our player into the frame.  I found this shot of priest with what looks like the same relative lighting or brightness and a background that was easy to obliterate.

Then you have to size it to match the dimensions of the frame.  You may have to resize one part or the other a couple times to make it look right.  Avoid stretching or distorting the image to make it fit.  Zoom it in and out evenly until it fills the space properly.  What I do is expand the "canvas" of the player image so it's big enough that the frame etc. fits inside it.  Then you can maneuver the images to line them up.

Kinda had to fudge it since there's not much image below his neckline.  Luckily, it's mostly just white with the shadow.  This is easily expanded with some photoshopping.  Just keep stretching or copying areas and pasting them down. 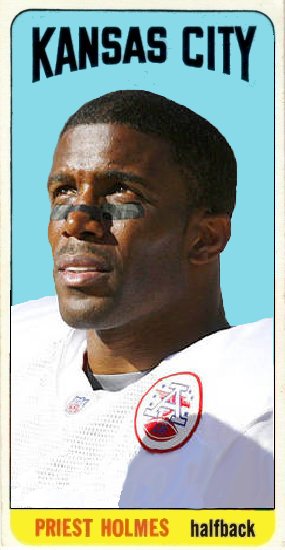 And voilà!  Your competed custom card.  This one didn't have much in the way of overlapping elements or background complications.  More of that in future lessons.
Posted by GCA at 8:06 AM
Labels: card art, custom cards, How I do it, photoshopping, pimpin' ain't easy, teaching