Almost forgot to post today since I'm off work and running around town.  I'm upgrading some storage solutions in the card room, so stay tuned for renovation posts.  I'm also about six posts ahead in creation, so I may go more than my usual alternate days.  But for now, let's rewind a week and see some show loot!

I've been attending the annual card show at the Recreation Center in Ephrata, PA for three years now.  It's a smaller, friendly show that has one signer and is held on a Sunday in March.  Apparently, it's been a tradition since 1980.

This year they had Tony Perez signing.  I haven't figured out where that takes place in the building since I've never gone seeking an autograph there.  The first time I went, Jim Palmer was supposed to be there, but had a family matter to attend to, so Brooks Robinson came in his place.  I've got auto'd stuff from Brooks from the early 80's, so I didn't partake.

This year I even got the flyer and auction listings in the mail ahead of time.  The show runs 8AM to 5-ish PM, and the auction starts at 2:30.  I perused the list and thought I might take a shot at a couple starter lots they had up for bid.  The first was a binder with a few different years of 70's hockey.  There was another with 1970 and '71 Topps football, and a third with 200 cards from 1968 Topps baseball.

I arrived about 9:00 (and still had to park way down by the middle school down the hill) and started shopping.  Found this from a dealer in the back.  He had some other interesting things too which I'll come back to... 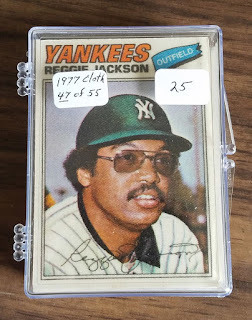 Missing a handful of the big stars, but well worth the price, I thought.

Moving on, I hit several dealers.  This is a good show if you're a Phillies fan.  There are a few different dealers that specialize in Phillies cards and memorabilia.  But unless it's Puddin' Head Jones or Larry Bowa, I'm moving on for the most part.  There are also a lot of vintage available, but the majority of the stuff I was searching for (high number '70 & '72, '64 baseball, '50 Bowman, etc.) were generally overpriced, at least compared to what I'm used to finding at the National and Chantilly shows.

I did have pretty good luck from a couple places though.  Managed to find a real nice batch of '64s ($1 each) from a dealer I've bought from before (and will see at Chantilly), added a few '50 Bowmans from two different dealers, knocked off some other oddball wants, 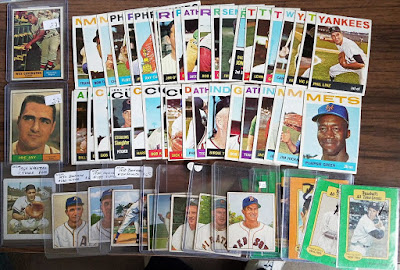 The '61s are not for me.  Though there are a few of you that want the Covington, so I'll have to look for another one at least.  Those Hygrades in the bottom corner are the set that never ends.  I just had to add almost a dozen more variations to my want list.  The Wheaties Torre was a neat find. 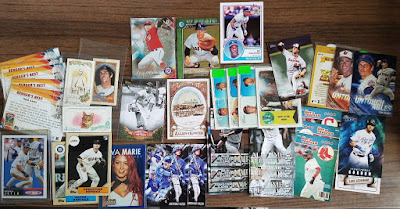 Some newer baseball stuff.  DefGav, there's your Biosphere card.  Will add to it and send out in a little while.  I know someone needed the Newhouser Wrigley (to kill their set?), but forget who.  Let me know if it's you.  Killed some inserts from the last couple years.  And I fulfilled my inexorable destiny and bought the 5 Tool Rizzo twice. Who needs one? 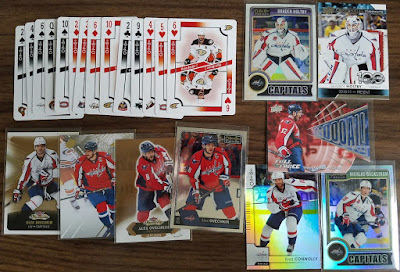 Same dealer with the '64s had 3/$1 inserts in baseball and hockey.  The OPC playing cards were in there with all these other Caps.  I like the Kuzy, he looks like he's the one shouting "GOOOAAALL". 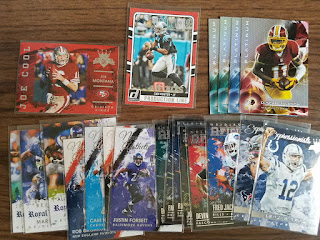 Football inserts from the quarter boxes.  The bottom row are from 2015 Gridiron Kings, which I started with a single box, and hence with only a couple inserts.  Pulled all these to officially start on the insert sets.  The base set is going to take long enough, but I'm a sucker for fancy inserts. 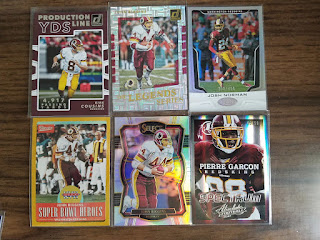 Some Redskins that were obvious I didn't have.

So remember the first dealer with the Cloth Stickers?  I went back to him (it was actually a fellow and his wife) and looked again at some other items I had seen before.  I couldn't make up my mind on which ones I wanted, but another fellow stepped in and plucked a couple of them, so that made my decision easier.  The seller said that guy usually buys multiple items, so now was the time.  I jumped in and made my selections.  The dealer made me an offer that matched the number in my head, so I pounced.   Here's what I got: 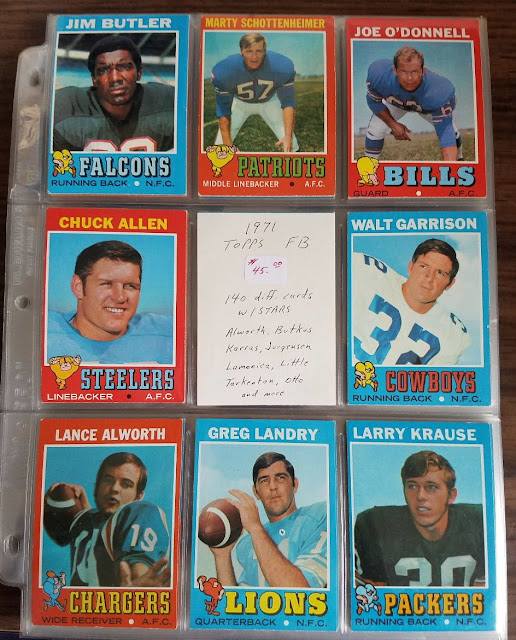 The auction had '70 and '71 together.  This dealer had another binder of '70, but not so many, and I wasn't as keen on the '70 set.  The other buyer snagged the '72 binder he had, and I think he might have got the '68 starter lot that was there too.  I had considered that, but I probably would have already had most of the stars that were there.  This was the biggest lot of all the football. 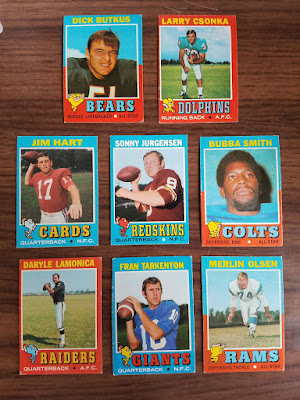 These are the big names.  I will have extras of Hart, Sonny, Bubba, Daryle, and Tarkenton.  Also Walt Garrison and a few others, not necessarily in this condition.

The next one was 1968 Topps, just like the auction again! 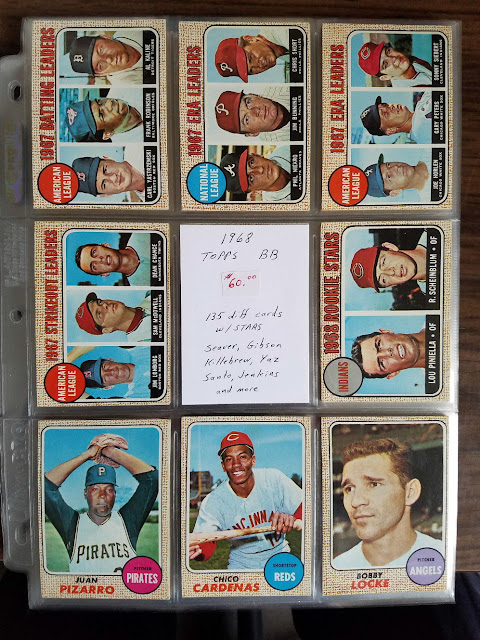 Again, a good number of big stars in this one too, plus a couple checklists, World Series, and All-Star cards. 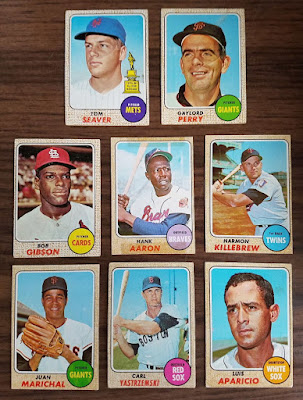 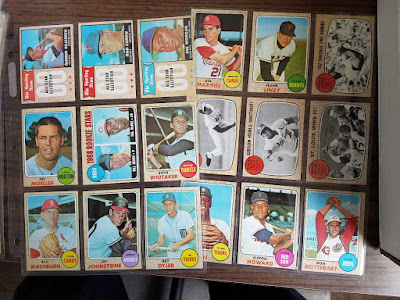 I've got a Seaver, Yaz, and I think Aparicio available, as well as Morgan All-Star.  I'll probably upgrade the Aaron too.  The auction lot wasn't nearly as nice as these.

And the capper was this one. 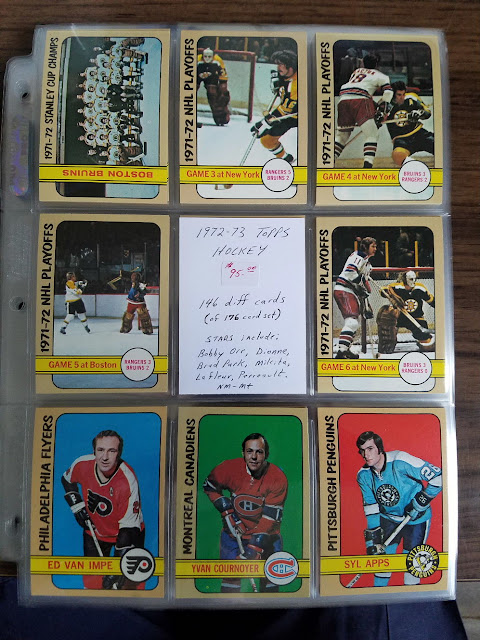 These are flippin' sweet.  Almost zero defects in this lot.  And most of the stars are already there.  The want list is short enough, I already have the names in there. 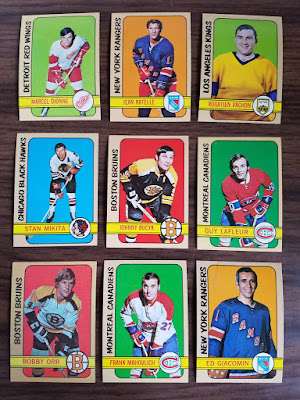 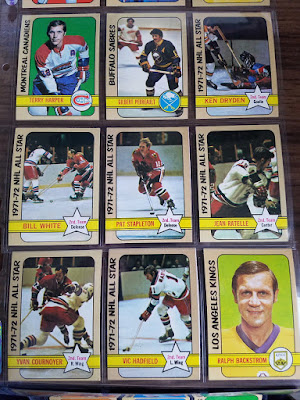 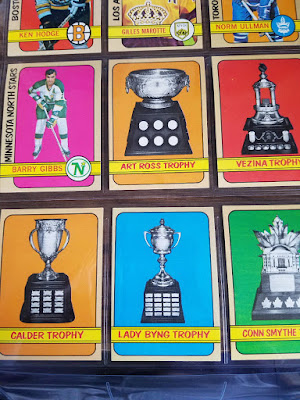 Lots of HOF'ers, All-Stars and trophies.  Probably my first Bobby Orr card.  When I saw this set for the first time many years ago, I thought it was goofy looking with that font up the side, but it's not as comical now.  Sort of appropriate that I got both of the tan bordered sets together (these and '68 baseball).

He gave me a good deal on the three lots, with a few bucks off if he could keep the binders.  So they didn't even cost me the true total of all three marked prices.  Plus, I didn't have to compete with anyone else (except I guess for that other buyer who got the other lots) to get them.  And these were better condition cards overall.  Not to mention that the couple selling them couldn't have been nicer.  I felt it was a win all the way around.  I left the show just before the auction started.  Made one brief stop on the way home, but that's another post.
Posted by GCA at 7:29 PM
Labels: duplicates, hockey, oddballs, old stuff, pimpin' ain't easy, show loot