A Decent Pack Of Heritage

OK, so never mind about the 200th post contest.  I have plenty to send out as I was already doing, and  Night Owl has one going anyway.  I just have to sit down and bang out a couple more good posts and pack some packages and finish putting my rooms back together.  So in the meantime here's one that has been in Draft mode for a little while.


Finally got it out of my system a couple weeks ago now.  Stopped at Target after pool to get a cardboard fix.  (Not that I really needed one with all the stuff I've been ordering online and winning on eBay lately).  Picked up a pack of Heritage, even though I wasn't intent on collecting the set at all.  I keep looking at Opening Day packs in various forms and then putting them back thinking I might as well order a hobby box and get a whole set, otherwise, I'll just be spending twice as much.

So when I opened the pack, the base case scenario would have been to get one of the inserts for my PC guys (that I ended up buying at the show on the 24th).  No luck, but it's only one pack so no biggy.  The only insert I got was the Stanton All-Star. 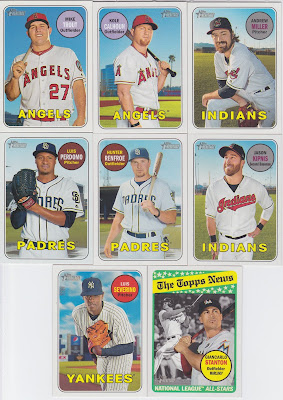 When I look over the selection of players, I actually didn't do too bad.  Mike Trout, (who I seem to have developed a knack for pulling now that I complained about it a year ago) leads off the roster, and is joined by Andrew Miller, Jason Kipnis - Palmer's partner on three inserts, and Severino, sort of, if you like the Yankees.  Perdomo is a short print. 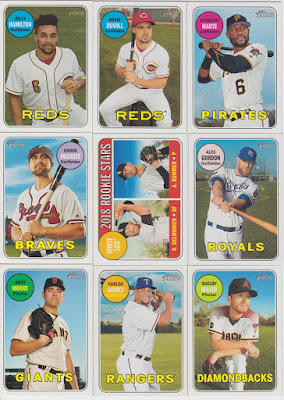 Then we have Starling Marte, Alex Gordon (is he a star or just the funky SP in 2006?), and CarGo, who is the last card (#400) before the short prints start.  I've also seen the Billy Hamilton card on a lot of Heritage posts.

And finally, there's Charlie Blackmon.  Not a bad level of star power in this pack.

The thing that struck me initially, though was that there seemed to be a LOT of west coast teams in this pack.  I'm over here near DC and Baltimore and the majority of these guys were way out west.

Except for the [required?] Yankees, aren't there a lot of eastern teams missing?  Ok, it's a random sample, but out of the 20 cards that come in the pack, let's compare the ratio of east to west here.

Hey Fuji and Tom, do you guys get a lot of Orioles, Nationals, Rays, Jays, and Phillies in most of your packs out there?

Well, I know the Rockies and Marlins fill every pack made, but still....

Anyway.  Let me know if you need any of these.  When I do the set, it'll probably be a couple years from now with a big base starter lot like most of the others I'm building already, so these are all availalble.
Posted by GCA at 9:32 AM
Labels: collecting quirks, commentary, retail purchases