Blog Bat Around: The All Autograph Team (Orioles Edition)

Zippy Zappy, of Torren' Up Cards came up with this BBA topic and I've enjoyed the first few contributions.   I will have a couple editions of my All Autograph Team.  I actually don't consider my autograph collection to be very big.  It's mostly my player collection guys that actually have autographs, a few others that I got in person at the big shows, and some cheap IP's that I picked up for some reason or another.  It's not a major part of my collection, but I suppose since my collection is so big, even a small portion is a relatively tall stack of cards.

Of course, you know what we have to do next - The All-Jersey swatch team, then the All ManuRelic Team, and the All-Oddball Team.

Here is the first of my All-Autograph Teams.  It's the Orioles Edition.  I tried to fill out each position with an Orioles player's auto.  I had to cheat a couple places, but I think I did pretty well. 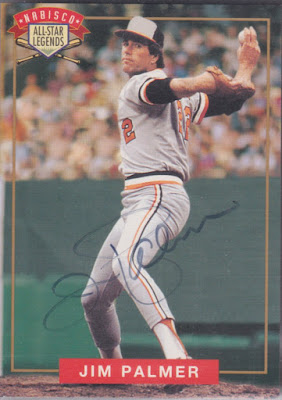 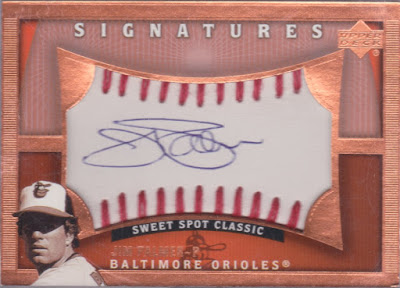 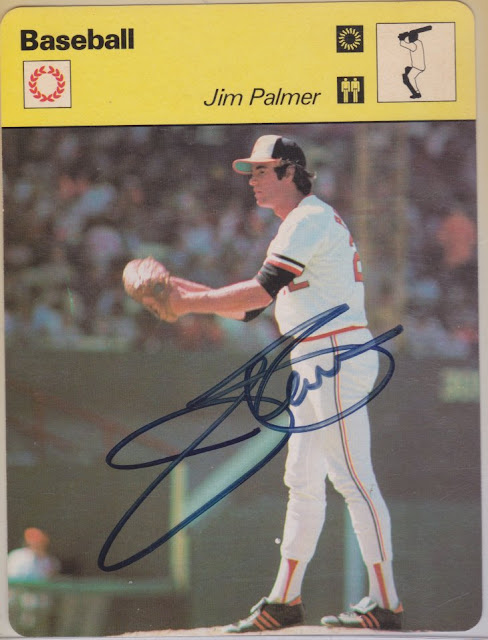 Continuing the Nabisco appearances in this BBA, Palmer is the easiest choice for this team.  He's one of my largest player collections and one of the few HOF'ers.  I got him to sign the Sportscaster card at one of his National Convention appearances.  He found it interesting that I brought such an oddball item and he recognized what it was.  I commented to him that when he and Don Sutton combined to call the Orioles/Nationals matchups in '06 or so, the stories they had between them were on another level.  Two HOF pitchers discussing the art and the game was riveting.  I also have Palmer's auto on a ball.  One of only two in my collection.

The rest of the rotation is all from my player collections too. 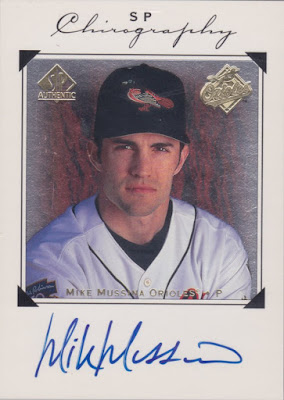 This SP Chirography is one of the nicest (sub? Insert?) sets like, ever. 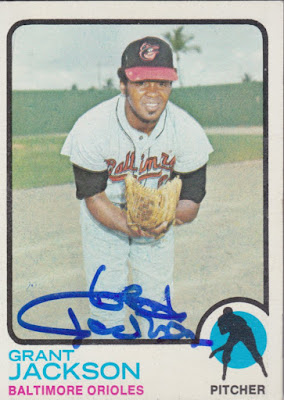 Just picked this GJax up from eBay for around $3.  And no, I don't have one of his 1966 massively overinflated rookie cards.  Someday I'll find a couple for less than $100.  Yeah, I'm gonna need two. 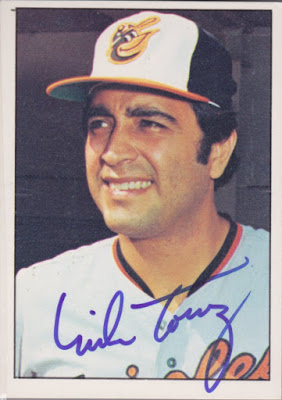 Very clean looking SSPC Torrez.  Bought it with the IP auto already there. 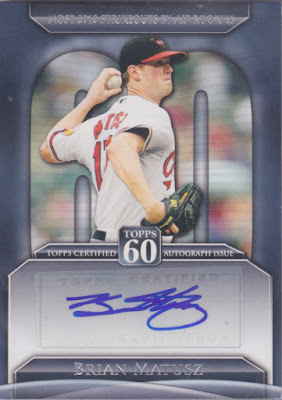 I'm trying to be a Brian Matusz supercollector.  He really crashed and burned at the end of his Orioles career (and maybe his MLB career as well?).  Got shelled with the Cubs and was let go by the Braves, so I suspect he might be done, but who knows?

Honorable Mention: Pete Richert.   Unless he was ever a reliever, then I merely left him off. 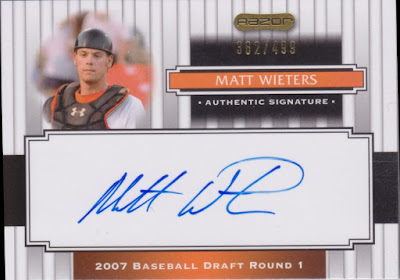 This is the type of card Wieters had before he finally appeared for Topps in 2016.  The Orioles are on like their third guy since Matt moved to the other Beltway city and joined the Nationals. 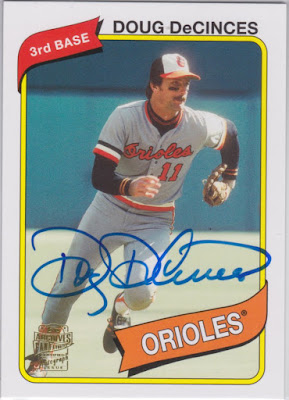 Gonna work around the field from left to right to deemphasize the ones I had to cheat for.  DeCinces is really my second best choice here, but the first one ended up in my All Personalized Edition, so stay tuned for that. 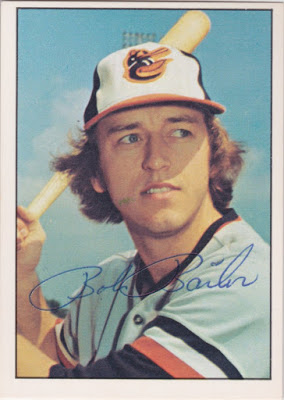 Bailor is much more famous for being the first player selected by the expansion Toronto Blue Jays.  He played a total of five games with the big leaguers according to the back of the card, but it says shortstop. 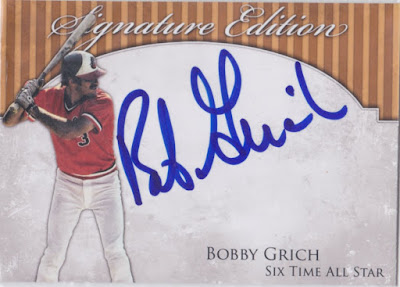 This is a custom card that I got from someone I don't recall at the National Convention where Grich was signing as a VIP.  I had picked out the perfect card from my collection of his and had it all set to go.  And left the dang thing home.  I was scrambling on the first night of the Nat and my friend Stuart came up with this card for me.  Nice unique piece. 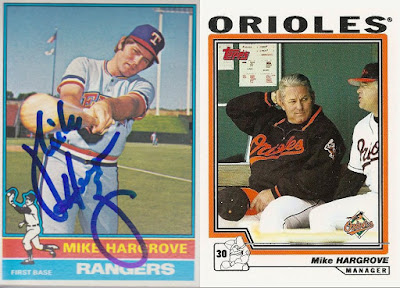 Hargrove was actually only a manager for the O's from 2000 to 2003.  But in his playing career, he was a first baseman.  So I cheated.  I don't have Chris Davis or Eddie Murray, so this is as close as I get.  I got the auto myself at another National VIP signing.  Don't think I have anybody else that managed for Baltimore.... 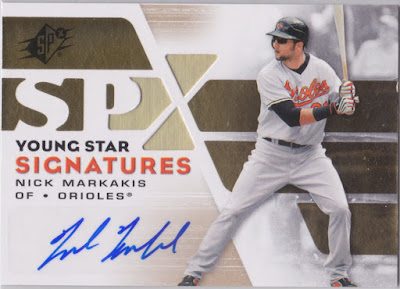 Ol' Nick performed admirably for us while he was here.  He's one of the few guys I've seen become a favorite and then leave to join another team.  He's toiled away in Atlanta for several years now, but it's still is a little strange to see him in another uniform.

Blair qualifies for both this O's Edition and the Personalized Edition, but since outfielders are probably the easiest position to populate (if you're pulling from any team), I went with him here.  He was really cool when I met him at a show in Chantilly.  He signed and appeared a lot.  Unfortunately he passed the day after Christmas 2013. 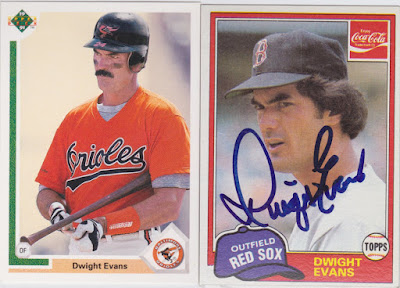 I know I said that outfielders were easy to find, but not from just one team in my limited collection.  So I had to go with Dewey, who was an Oriole for a significant time, and was an outfielder.  I just don't have an auto of him not on the Red Sox.  Works out OK though, because I did have plenty of star caliber outfielders otherwise for the other editions.

Would have had to cheat for DH with Don Baylor in a similar fashion, but apparently his IP autos are suspect, so I'll leave that one out.

So that's it for my Orioles All Autograph Team.  Stay tuned for my All Personalized Auto Team and then my regular team with some high star content.  Can't wait to do the relic team too! 😁
Posted by GCA at 8:28 AM
Labels: Blog Bat Around, My stuff