Once I got the desk cleared out and moved the cabinet over, it was time for the new additions.

Somehow I managed to push these two bookcases up a flight of stairs by myself.  I definitely recommend getting help for things like that because I've spent three days out of work with back problems and the associated complications of the medicines they gave me.  It took two weeks for the effects to show up (and I think I aggravated it with some minor yard work).

But anyway, at the time, I got 'em in there. 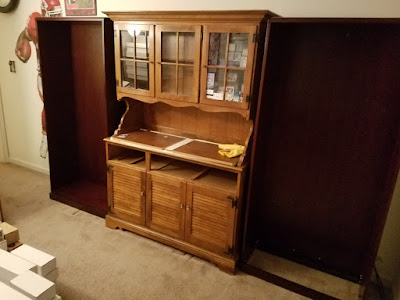 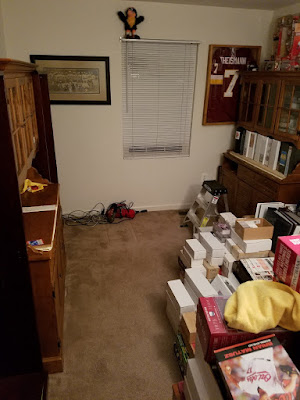 Then came the desk.  The one I had in there originally would be too wide to allow access to the cabinet on the right and the shelf on the left.  So I measured another desk I had sitting disassembled elsewhere, and it was a foot shorter.  Tough to lose the sorting space, but had to make the sacrifice to fit it in the room. 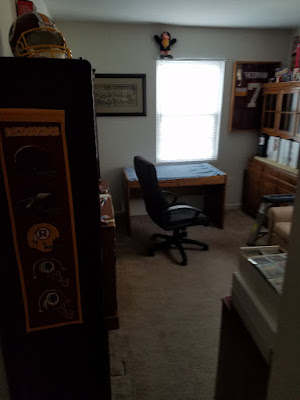 I guess it will serve as motivation to keep the desk relatively clear and put stuff away quickly.  I keep an old towel on the desk to make it easier to pick up piles and individual cards. 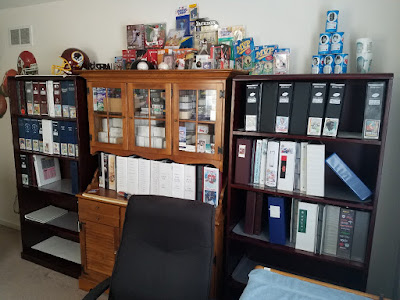 Here are the bookcases completely assembled and somewhat loaded.  I put the sets back in order, but the other stuff may evolve as I add to it.  The oddball stuff on top is just parked there for the moment.  The cabinet stuff is pretty much like it was, but the other stuff will be arranged more carefully later.

Finally, I was able to put the original bookcase in the other room.  It will house mainly books and supplies and a few odd sets that I don't have to handle much. 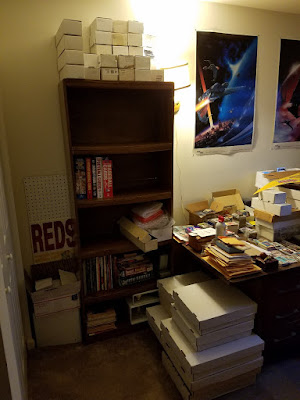 Those boxes up top are all my empties.  And now I have a spot for large boxes of extra cards by the desk where I can easily pull them and pack them to ship out.

Next time - a quick wrap up with a look at the new arrangement in full operation!
Posted by GCA at 10:33 AM
Labels: How I do it, My stuff, pimpin' ain't easy